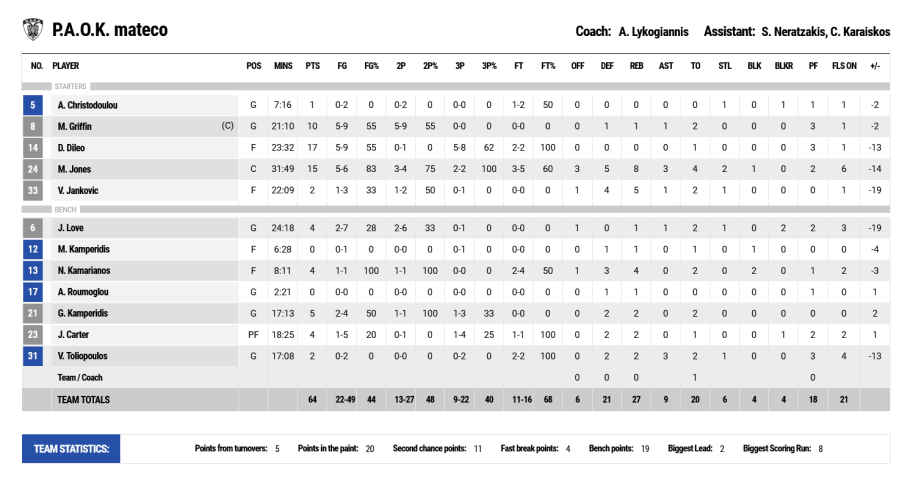 Comfortable and beautiful Panathinaikos in Pylaia!

He reacted after Belgrade Panathinaikos!

The “greens” left behind the bad image against the Red Star, where playing a very good defense in Pylaia, they prevailed comfortably 81-64 of PAOK, going 4-1 in the Stoiximan Basket League.

The “clover” forced on 20 errors the team of Thessaloniki, with Papagianni to be top with 16 points and 9 rebounds. Others 14p. had Macon, with Sant-Ross having 13p. and Kaselakis 11p.

From the “Biceps of the North”, who declined to 1-4, first scorer was DiLeo with 17 points and was followed by Jones with 15 points.

Both teams started with many mistakes in the first two minutes (2-0), with the result that the pace was very bad. Then, Panathinaikos tightened defensively and by stealing ran to the open field, making a series of 12-0 (2-12), until 5 ‘. With the entry of Love on the floor, PAOK found a score in the attack, but the “greens” had full control and with Sant-Ross and White closed the first period at +14 (11-25).

The players of Priftis continued the same concentration on both sides of the floor and in the second ten minutes, where with a series of 6-0 they went to +20 (11-31), which they maintained (15-35), until 14 ‘. There, the “greens” relaxed, with PAOK taking advantage of it and with Griffin and Carter reducing to -11 (28-39), in 18 ‘. However, in the last two minutes, Panathinaikos tightened defensively and with Kaselakis’ three-pointer went to the locker room with +14 (28-42).

The “greens” continued to be just as serious in the fourth quarter, with the difference escaping again to +20 (54-74), in 33 ‘. From that point on, the match became very free, with Panathinaikos taking the victory with the final 81-64.

See here the film of the match

Facebook
Twitter
Pinterest
WhatsApp
Previous article
Opinion – Juca Kfouri: Sylvinho is far from being the only one with an indecipherable brain in Brazil
Next article
Valencia beat Atletico with two goals in the delays!