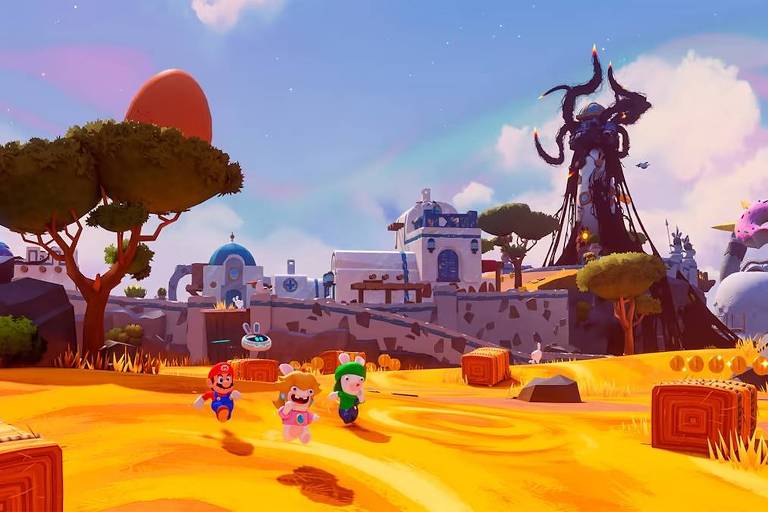 Unreleased ‘Mario + Rabbids’ and ‘Street Fighter’ are highlights of BGS

One of the main electronic game fairs in the country, the BGS (Brasil Game Show) has resumed after three years of interruption due to the Covid-19 pandemic. Between October 6th and 12th, this year’s event had as main attractions the participation of streamers, esports athletes and youtubers, but, in the Expo Center Norte pavilion, there was also space for game fans to play new and old titles from different platforms.

Among the highlights of the fair were two unreleased games that could be tested first hand by the public, such as “Mario + Rabbids: Sparks of Hope”, by Ubisoft in partnership with Nintendo, and “Street Fighter 6”, by Capcom.

The second title resulting from the partnership between Ubisoft and Nintendo is not just a continuation of “Mario + Rabbids: Kingdom Battle”, which innovated by putting the main characters of the Nintendo franchise in a turn-based strategy title in the style of “XCOM” , but also an evolution.

The game no longer uses a checkered grid for player movement and starts to adopt free movement within a delimited area, which makes the game more fluid and closer to the action/platform style that Mario fans are used to.

In addition, the game maintains open-world exploration areas similar to “Kingdom Battle”, with its own missions, puzzles and optional challenges, which helps to break the rhythm, sometimes a little tiring, of the turn-based battle sequence. .

New powers and weapons also increase the scope of strategies available to the player. The addition of “sparks”, which function as customization items that give elemental powers or extra perks to characters, creates a whole new layer of complexity for battles.

While the game’s childish and unpretentious tone may alienate some more ardent fans of traditional strategy titles, it’s no exaggeration to say that “Sparks of Hope” has the potential to become one of the most complete and fun turn-based strategy games on the market.

The game, exclusive to Switch, hits stores on the 20th and is now available for pre-order for R$ 299.99.

Playing “Street Fighter 6” was a bit like stepping back in time to the 1990s, when I used to spend what little money I had left over my vacation allowance to play “Street Fighter 2” at the arcade.

More than six years after the turbulent release of “Street Fighter 5”, Capcom seems to have looked to the series’ origins for a way to regain the prestige of what was once one of the most successful franchises in the video game world.

The version of the game available on BGS was less complete than the one that was tested in closed beta between October 7th and 10th. With 8 of the 11 fighters already confirmed for the game, it was not yet possible to try out the already announced “World Tour” mode, which will work as a kind of story mode, nor to test the changes in combat and game balance. But some new features and features of the game are already very evident.

This is the case, for example, of the inclusion of narration in fights. Unlike what happens in football games, in which the voice of the narrators often hinders rather than helps the immersion, in “Street Fighter 6” the novelty is well associated with the gameplay and helps to bring the game closer to the transmission of MMA fights and boxing on TV, with quick and accurate commentary.

The decision to include elements of urban culture, such as Hip Hop and graffiti, in the artistic direction of the game, also proves to be right. The package gives coherence to the “Street Fighter” universe, which, as the name implies, seeks to reproduce the underworld of street fighting.

“Street Fighter 6” is scheduled for release in 2023 on PCs and Xbox and PlayStation consoles.

The newest title by Sam Barlow (from “Her Story” and “Telling Lies”) is a kind of non-linear interactive film that tells the fictional story of actress Marissa Marcel and her three features, never released to the public. The player takes on the role of a fan who manages to get his hands on a collection of videos about the actress’s films and needs to organize them in order to discover the mysteries that surround them, in a plot that mixes death, sex, religion and the supernatural. It is a title for adults, which has the rare merit in the game industry of not censoring itself to avoid taboos and controversies. The game is available on Xbox Game Pass and a mobile version should be made available in the future for Netflix subscribers.