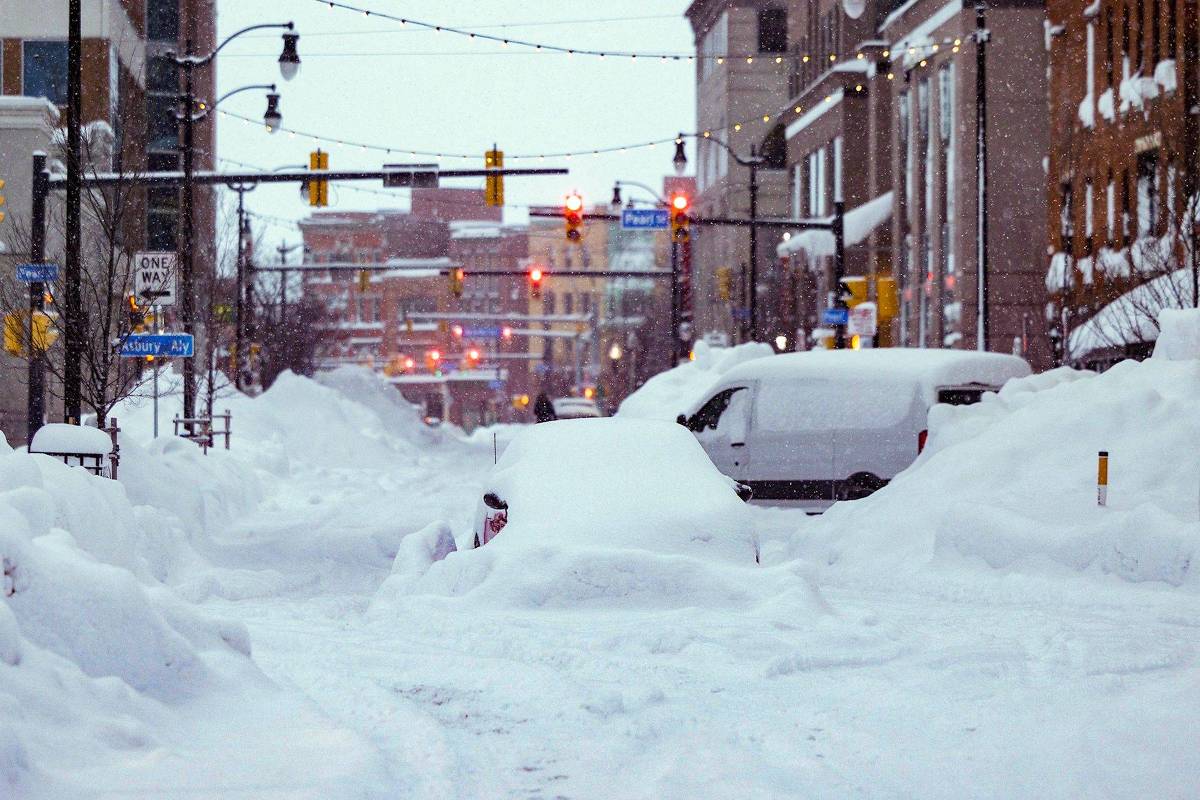 The cold wave that affects part of the United States and Canada has already left at least 59 deaths, according to official records, although the damage caused is still difficult to measure.

The phenomenon that caused the largest snowstorm ever recorded in North America is called the Arctic Polar Vortex.

In some places, like Buffalo, in the state of New York, it resulted in yet another phenomenon, called a bomb cyclone, with an accumulation of snow above 1.5 m and temperatures reaching minus 45°C in some places.

Thousands of flights have been cancelled, driving restrictions have been imposed in East Coast cities and at least 55 million Americans remain on a wind chill alert.

Dozens of people were also affected by cuts in the transmission of electricity due to gusts of wind, which caused the fall of wires and electrical transmitters.

See below how this phenomenon is formed, what is its relationship with climate change and the possible risks for other countries, such as Brazil.

How does the Arctic Polar Vortex work?

According to Paulo Artaxo, professor at USP’s Institute of Physics and lead author of a chapter in the most recent report by the Intergovernmental Panel on Climate Change (IPCC), the phenomenon that has been hitting Canada and the United States, but also Japan, occurred from a drastic drop in pressure in the Arctic polar vortex, an air system that lies above the North Pole, about 15 to 50 kilometers above the atmosphere.

“This Arctic polar vortex keeps extremely cold air masses, down to -50°C, restricted to the Arctic circle. it ends up ‘leaking’ to higher latitudes with greater population density, such as Canada, the United States and Scandinavia”, he explains.

Why did the arctic wind system change?

Artaxo states that global warming is the probable cause for the decrease in pressure in the Arctic polar vortex, generating instability in the system. “Increase in temperature causes an increase in energy in a system, and it’s a purely physical issue: one of the ways energy is dissipated is with extreme weather events,” he says.

And the bomb cyclone generated in Buffalo, how does it form?

A bomb cyclone forms with the drastic drop in pressure in an extratropical cyclone, which can trigger high-speed winds and snow and rain storms.

According to Artaxo, the formation of the bomb cyclone in Buffalo occurred because there was a fall of more than one meter of snow together with strong winds, causing a very low center of pressure in the air mass over the city, thus causing the cyclone. “It intensified in Buffalo on top of the Arctic polar vortex phenomenon, causing the chaos we’re seeing there,” he says.

What is the frequency of bomb cyclones?

Despite not being such a common event, they do occur, explains the meteorologist at Inmet (Institute of Meteorology), Heráclio Alves. “It is common for cold air masses to come from the polar regions and cause unseasonal cold waves, as happened in Brazil last year. Pump cyclones, on the other hand, are always caused by low pressure, and they bring stronger winds and rain, in general with very low temperatures”, he says.

Is the cold wave expected to reach Brazil?

Do not. Artaxo explains that the air mass of the northern hemisphere is limited by a zone called intertropical convergence, close to the equator, which separates the northern and southern air masses of the planet.

“There is no risk of it arriving in Brazil, but we know that these extreme and more intense events are happening here too, with prolonged droughts [como a que atingiu o Centro-Oeste no ano passado] and very intense rains”, he explains.

Alves, from Inmet, reinforces. “We make models and forecasts of extreme events, such as cyclones, but this type of phenomenon is very rare in Brazil. What you have more are cold waves outside the season caused by a polar air mass, which can often south of the Amazon, but they generally maintain a low temperature for three consecutive days and then leave,” he says.

Is it possible to associate the cold wave with climate change?

According to experts, the intense cold experienced in recent days in the US and Canada, as well as the last summer with very high temperatures in the northern hemisphere, are direct effects of climate changes already seen in the last two years and which tend to become more frequent. and intense.

For the geologist and professor of the graduate program in Environmental Science at USP, Pedro Luiz Côrtes, the IPCC reports already warned of this greater intensity of climate phenomena in the coming decades, and now the effects can already be felt globally.

“With global warming caused by the emission of greenhouse gases, we put more energy into the system, so natural processes will occur with greater intensity due to warming. In the specific case of the cold in the northern hemisphere, it is happening due to warming of the Arctic”, he explains.

Artaxo also warns of the greater occurrence of these events in the future, and reiterates that they are not new to science. “Unfortunately, this was scheduled to happen, scientists have been warning about this for years. Now, what we need to do is act against this increase in both intensity and frequency. [de eventos climáticos] reducing the emission of greenhouse gases”, he says.

Can we reverse this situation in the near future?

For Artaxo, the increase in global average temperature is already in the range of 3°C by 2100, and that would be irreversible. “It is important to think that locally the increase could be even greater, as some regions in the interior of Brazil reaching 4 °C to 4.5 °C”, he says.

However, curbing emissions now would help to reduce the frequency with which these events occur, says Cortês. “Scenarios like this are strong indicators that the climate is taking on a new pattern in different parts of the world. Where it will end up, we cannot say, because we haven’t stopped emitting gases into the atmosphere yet”, he says.