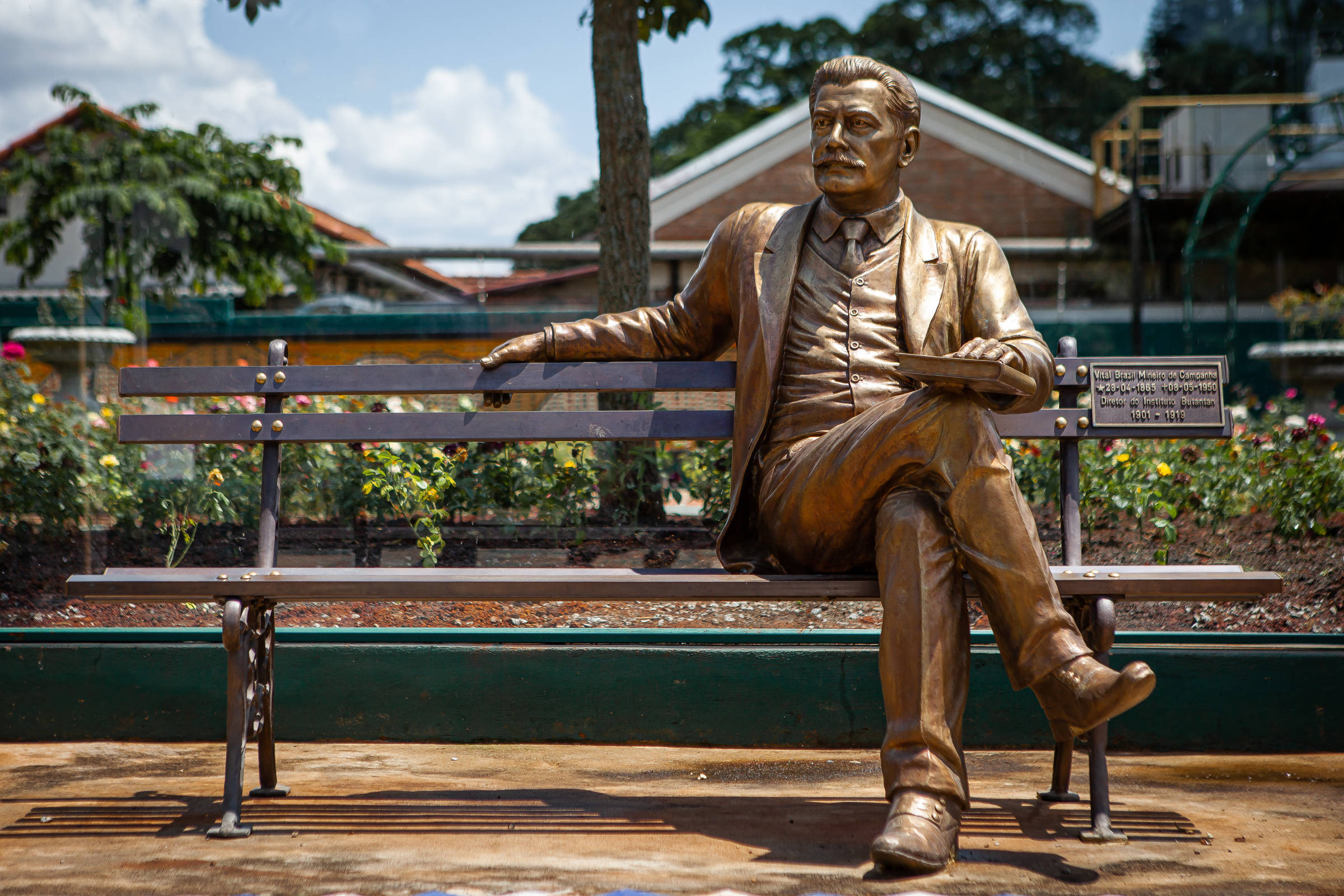 In the 469 years of São Paulo, meet 9 scientists who are part of the city’s history

The city of São Paulo turns 469 this Wednesday (25) and continues to be the scientific cradle in the country. Here are some of the main Brazilian research institutes, such as Butantan, Adolfo Lutz and, of course, the largest university in Latin America, USP.

With the expansion of the city from 1900 onwards and the creation of universities and research institutes, many scientists made (some still make) history in São Paulo, contributing to national academic progress.

Among them are Adolfo Lutz, Victoria Rossetti, Ruth Sonntag Nussenzweig and Mayana Zatz.

Considered the father of tropical medicine in Brazil, he was born in Rio de Janeiro and studied medicine at the University of Bern, Switzerland. After graduating, in 1881, he started working as a doctor in a clinic in Rio de Janeiro. He then traveled to Germany to study leprosy and to Hawaii, where there was a major leprosy hospital. Back in Brazil, in 1892 he was invited by the then governor of São Paulo, José Alves de Cerqueira Cezar, to direct the Institute of Bacteriology, which would later be named after him. During the bubonic plague epidemic in Santos, he worked with doctors Emílio Ribas and Vital Brazil. With the latter, he helped create another important São Paulo institute, Butantan. He was the first scientist in Latin America to isolate the parasite that causes yellow fever from the mosquito. Aedes aegyptius, in addition to having conducted important research on tropical diseases such as cholera, typhoid fever, malaria, schistosomiasis and leishmaniasis. In 1908, he left the institute and moved to the Oswaldo Cruz Foundation in Rio, where he remained until his death.

He was born in the city of Campanha, in Minas Gerais, and studied at the Faculty of Medicine in Rio de Janeiro. After graduating in 1891, he moved to São Paulo. Sanitarista, he acted in the fight against epidemics of yellow fever and bubonic plague. He worked at the Instituto de Bacteriologia de São Paulo, in 1897, together with Adolfo Lutz, and, in 1899, he went to work in a laboratory founded at Fazenda Butantan, in the west zone of the city. He was the first director of Butantan (then the Serumtherapic Institute), from 1901 to 1919. There, he started breeding horses for the production of antivenom and, later, vaccines. Like Lutz, he moved to Rio de Janeiro to work at Fiocruz with Carlos Chagas, another important sanitarian in the country.

Daughter of Italian immigrants, she was born in Santa Cruz das Palmeiras, about 245 km from the capital of São Paulo, where she grew up on the farm – her father and grandfather were agronomists. From an early age, she was interested in collecting material and studying the pests that affected the plants on her site. She studied agronomy at Esalq (Escola Superior de Agricultura Luiz de Queiroz), in Piracicaba, thus being the first woman to take an agronomy course in the state of São Paulo and the second in Brazil, in 1937. She was an intern at the Instituto Biológico, in São Paulo , under the guidance of Agesilau Bitancourt. She studied plant parasites and methods to isolate fungi from the genus phytophthora of citrus. She was head and later director of the institute’s plant pathology division, where she conducted a variety of research of agricultural relevance. In 1988, she received the title of emeritus servant of the São Paulo government and, in 2004, she was named Grand Cross of the National Order of Scientific Merit.

The sociologist from São Paulo is considered one of the most influential Brazilian intellectuals of the 20th century. From humble origins, he was a shoeshine boy and later a waiter. He studied sociology at FFLCH (Faculty of Philosophy, Sciences and Letters) at USP and completed his master’s and doctorate at the same institute. In addition to academic research, he defended public, secular and free school as a constitutional right for Brazilian citizens. He helped found the PT and was elected deputy in 1986 by the party. He was re-elected in 1990. His scientific legacy includes the transformation of sociological thinking in the country and a new methodology used in research in the area, combining analytical and critical rigor to the studies. He died in 1995 after complications from a liver transplant.

Doctor, herpetologist and samba dancer, he was born in São Paulo, the son of Italian parents. He attended the Faculty of Medicine at USP and obtained a doctorate in zoology from Harvard University. Back in Brazil, he worked and was director of the Museum of Zoology at USP, in São Paulo. He was one of the founders of Fapesp, an organization that promotes research in the state of São Paulo. In the area of ​​zoology, he dedicated himself to the study of amphibians and reptiles, describing dozens of new species, many of them lizards. He was the author of the important island refuge theory on the formation of Amazonian biodiversity. He also composed works that are part of the cultural heritage of São Paulo, such as “Ronda” and “Volta por Cima”. He received the Grand Cross of the National Order of Scientific Merit. He died in 2013 from complications caused by pneumonia.

Born in Vienna (Austria), she came to Brazil with her family after Nazi Germany occupied her country of origin. In 1948, she entered the medical course at USP, where she met Victor Nussenzweig, her future husband, and the sanitary doctor Samuel Pessoa. Together, they began to carry out research on parasitic diseases, more specifically Chagas disease and the mechanisms of transmission through blood transfusion. Hired as an assistant professor of parasitology at USP, she carried out two years of postdoctoral research at the Collège de France, from 1958 to 1960, and returned to Brazil, where she worked at the Escola Paulista de Medicina. Due to the situation in the country with the military dictatorship, Ruth and her husband went abroad, where they started their careers at New York University and remained there as two of the main exponents of tropical medicine in Brazil.

Little known to the general public, he was an important promoter of science and mathematics education in the country. Born in São Paulo, he studied mathematics at USP and completed his doctorate at the same institution. He then did a post-doctorate at Brown University, in the United States, and joined Unicamp as an associate professor in 1972. He was director of the Institute of Mathematics, Statistics and Computer Science (Imecc) at the same university until 1980, a period in which founded the interdisciplinary laboratory for teaching and curriculum improvement (Limec), contributing to the reduction of failure rates in the institution’s mathematics courses. He worked with Unesco to train doctors in mathematics in Mali (Africa) and later created a similar program in Latin and Caribbean countries. He taught at several educational institutions in São Paulo, including USP, PUC and Universidade Bandeirante de Educação.

The surgeon was recently recognized as one of the most influential scientists in the world by Stanford University (USA). Born on the island of Marajó, in Pará, she studied medicine at USP, where she was the first female surgical resident at the Hospital das Clínicas. She specialized in digestive surgery, having worked in the surgery department of Hospital Alemão Oswaldo Cruz. She was a professor in the department of gastroenterology at USP and published more than 300 scientific articles, receiving more than 50 awards. In 2020, she survived an admission of more than 50 days due to Covid-19.

A great name in Brazilian science, the biomedical doctor and geneticist was born in 1947, in Tel Aviv, Israel, and moved to Brazil in 1955. She studied biology at USP, where she also obtained a master’s and doctorate in genetics. She spent two years at the University of California at Los Angeles to conduct postdoctoral research. Back in Brazil, she helped create important associations for research into genes related to Duchenne dystrophy. In the late 1990s, it catapulted Brazil’s position in human genome studies, making the country the second largest repository of sequences at GeneBank, the world’s main repository of DNA. At the head of the Center for Human Genome Studies since 2000, Zatz was the first to demonstrate the causal relationship between zika virus infection and microcephaly in babies in the country, in 2016. She received the Grand Cross of the National Order of Scientific Merit, in 2000, and the L’Oréal-Unesco Prize for Women in Science in 2001.