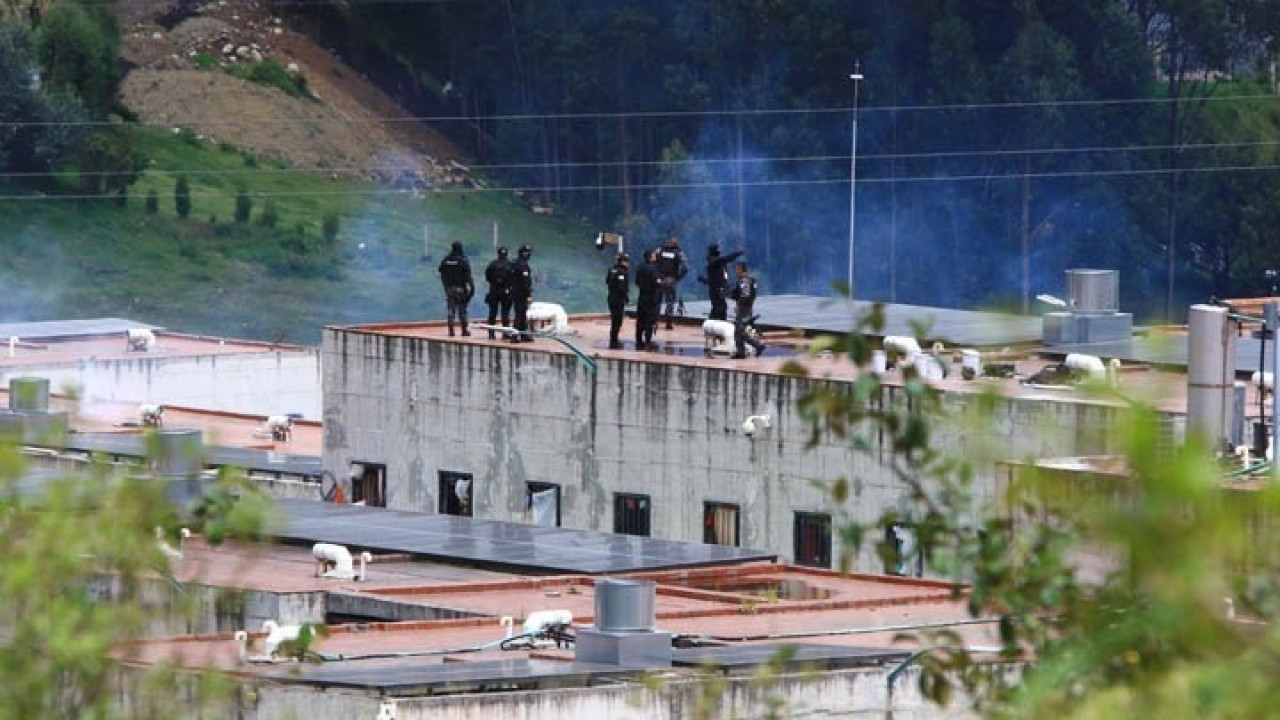 Since February 2021, there have been eight massacres in incidents between inmates in Ecuador’s prison system. In total, the dead have exceeded 400.

Bloody clashes continued on Tuesday in one of Ecuador’s largest prisons, the day after a prisoner clash left at least 15 dead, including an alleged drug lord, and dozens injured.

Since February 2021, there have been eight massacres in incidents between inmates in Ecuador’s prison system. In total, the dead have exceeded 400.

“New clashes” broke out in the prison in the district of the city of Latacunga, about a hundred kilometers southeast of the capital Quito, the penitentiary agency (SNAI) announced yesterday.

According to SNAI, gunshots were heard in the prison’s medium security wing and prison staff were rushed away.

Jail No. 1 on the outskirts of Latacunga houses some 4,300 prisoners. It is among the largest of the Latin American state.

The day before Monday, fifteen prisoners were killed and another 33 injured in the clashes with knives and firearms, which were once again marked by brutality and mutilation of victims. According to a SNAI official, an alleged gang leader and group of inmates known by the nickname “El Patron” is among the dead.

“It’s very sad what I’m going to say, but most of the bodies were dismembered,” said Franklin Poveda, a local official. According to the authorities, knives were mainly used in the clashes.

Some 600 police and military personnel were deployed yesterday Monday to reinforce guards to regain control of the detention centre.

Metal bars were installed in front of the prison, where the endless ballet of ambulances coming and going with sirens blaring continued.

As every time massacres are committed in Ecuadorian prisons, relatives of inmates, with tears in their eyes, seized with panic, desperately asked for news about their loved ones, AFP journalists found.

Relatives called out the names of imprisoned brothers, fathers, sons…

With his stomach in knots, Roberto, 43, recounted how the wait was interminable until he finally heard his nephew, “Chucho,” answer him, “I’m here!” behind the perimeter wall of the prison.

“I’m looking for my brother Carlos Bravo. I came at six in the morning. They called me to tell me to go look for my brother. I couldn’t find out anything, there is no list, nobody tells me anything,” said a woman who did not want to give her details between sobs.

Ecuador’s conservative president Guillermo Lasso sent a message of “condolences and solidarity” to the families of the victims yesterday.

Yesterday’s massacre is believed to have been sparked by the killing of 36-year-old alleged drug trafficker Leandro Norero, or “El Patron”.

Jorge Flores, deputy director of the prison, told the press that “as far as we know (…) citizen Leandro Norrero is among the victims.”

Leandro Norrero was arrested in May in Guayaquil and faces charges of drug trafficking and money laundering after authorities seized $6.4 million, 24 gold bars, firearms and ammunition.

Guayaquil, Ecuador’s largest port, has become a hub for cocaine trafficking to European and US markets.

According to the GK news website, which regularly monitors prison violence, “Patron” was murdered “on the same day” he was to be charged with drug trafficking. He had a “heavy criminal record” and was “the leader of (gang) Los Ñetas, then he founded (gang) Los Chone Killers under the alias Trombudo,” GK explained.

Gangs such as Los Chone Killers, Los Choneros, Los Lobos and Los Tiguerones often manage drug trafficking inside prisons and clash within and outside their walls for market dominance.

The authorities seem unable to stop the violent incidents in the prison system, which are permanently marked by beheadings and other atrocities.

Ecuador’s overcrowding inmate population had been 30% over the prison’s nominal capacity, but was reduced (to 11.3%) following presidential pardons and the implementation of the parole rule.

Ecuador, with almost 18 million inhabitants, between Colombia and Peru, the two countries where the largest quantities of cocaine are produced in the world, has become in recent years a hub for the trafficking of the white powder to Europe and the USA and a field of merciless gang conflicts. In 2021, authorities announced that 210 tons of drugs, mostly cocaine, were seized, a record amount. In the same year, the homicide rate reached 14 per 100,000 inhabitants, in other words almost doubled compared to 2020.