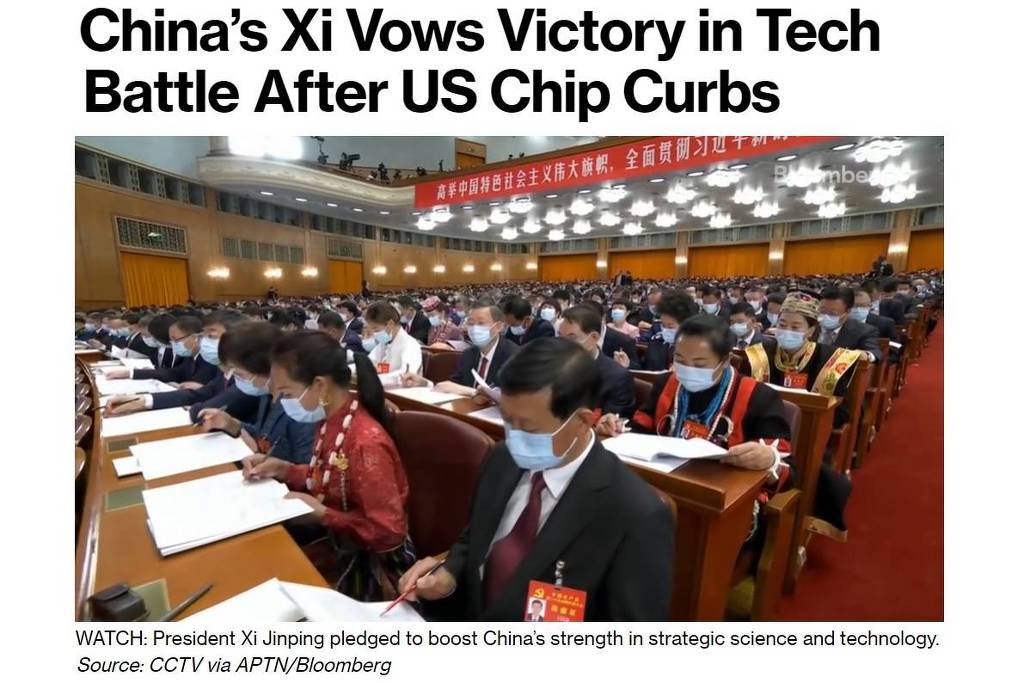 As Guancha recorded then, the Chinese foreign ministry spokesman, when asked about the refusal of visas for Western newspapers last year, replied that Bloomberg, less editorialized, had just received another fifty.

The result appeared in coverage of Xi Jinping’s speech. The financial service blasted through Sunday with headlines detailing what was heralded for “the world’s next number one economy.”

At 2:30 am, the highlight of its American home page was that “Xi says China’s power has increased and warns of storms.” Below, “President Xi: China’s Covid Measures Protected People”.

At 9 am, “Xi promises victory in technology battle after US chip restrictions” (reproduction above). Below, “Xi calls dispute over Taiwan a Chinese issue, responding to the US.”

At 6pm, the American headline was “Xi Tells World China Is Ready to Firmly Defend Its Place”.

And the headline on Bloomberg’s Asian home page was already up for analysis, “Financial traders see focus on tech, more Covid grip after speech.”

“By poring over the nuances of each phrase,” traders turned to the expected developments in technology, highlighted by Peiqian Liu of Natwest Markets, and national security by Hong Hao of Grow Group.

Next to the environment, underlined by Gary Ng, of Natixis, and “long-standing passion for Xi”, according to Bloomberg, are the areas now with the most attention from the government – and eventual gains in the financial market.

In the highlights of the Global Times, linked to the official newspaper Renmin Ribao or People’s Daily, “PC charts course for modern socialist China in all aspects” and “China lays out domestic path to achieve modernization and lead economy to fairer and more innovative growth” .

USA AGAINST THE OTHER RICH

With a photo of Mexico (above) and also citing Brazil, Bloomberg reports that the “emerging ones leave less sore as the dollar’s anger sinks rich nations”.

Surprising Citigroup and others, “much of the pain is actually being felt in the UK and Europe” as well as Japan, which are “starting to hate” the US central bank, according to the Financial Times, over the soaring currency.