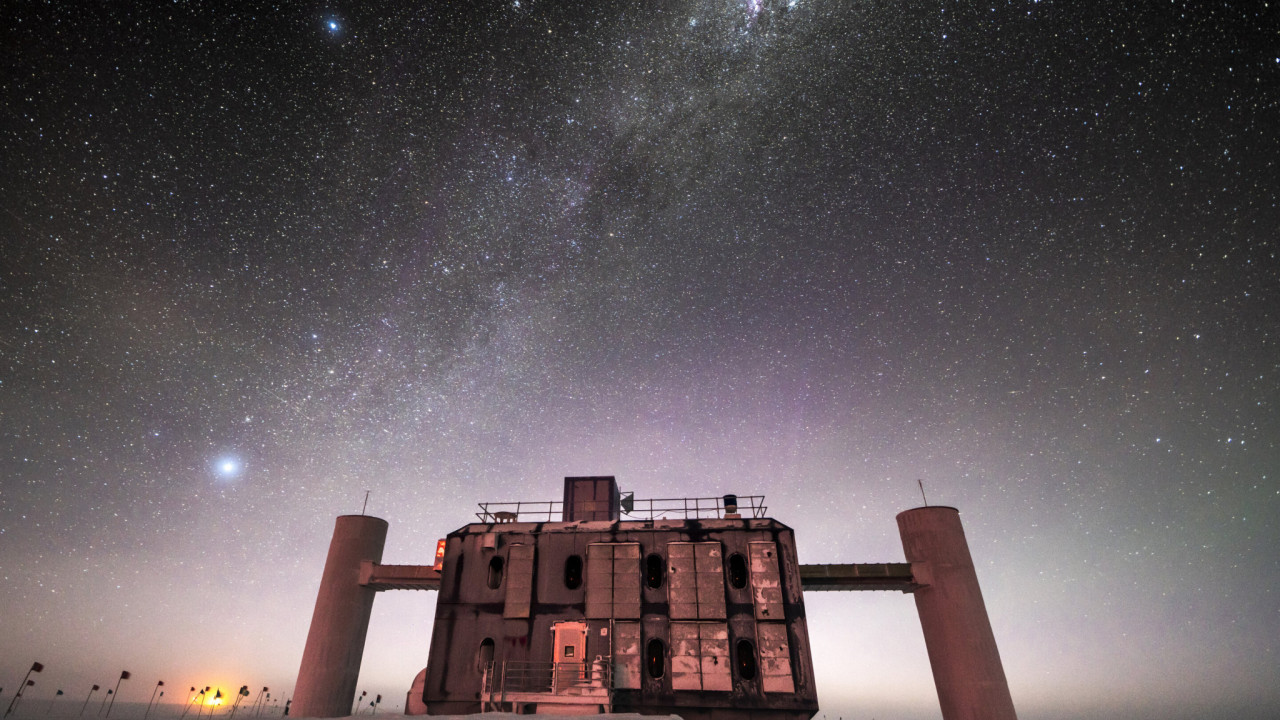 South Pole: Cosmic neutrinos from the depths of a galaxy 47 million light years away detected by the IceCube observatory – video

The detection was made with the IceCube Neutrino Observatory, a unique massive “telescope”, a large part of which, with a volume of about one cubic kilometer, is located 1.5 to 2.5 kilometers below the surface of Antarctica at the Amundsen-Scott Station at the South Pole.

An international team of scientists has announced that they have found strong evidence of high-energy neutrinos being emitted from a nearby galaxy, which have reached our planet. It is only the second time that cosmic neutrinos have been detected on Earth.

The detection was made with the IceCube Neutrino Observatory, a unique massive “telescope”, a large part of which, with a volume of about one cubic kilometer, is located 1.5 to 2.5 kilometers below the surface of Antarctica at the Amundsen-Scott Station at the South Pole.

The source of the neutrinos was the galaxy NGC 1068, also known as Messier 77, in the constellation Cetus, 47 million light-years from Earth. It is a galaxy visible even with large binoculars, which was discovered as early as the 18th century and which for years has been the target of many astronomical observations.

NGC 1068 is a spiral galaxy roughly like our own, but – unlike our own – it is highly active, meaning most of its radiation is not produced by its stars, but by matter falling into a supermassive black hole, with a mass millions of times greater than our Sun and much larger than the dormant black hole at the center of our own galaxy.

The researchers, led by physics professor Francis Halzen of the University of Wisconsin-Madison, who made the relevant publication in the journal “Science”, reported that so far 80 neutrinos with an energy of the order of TeV (teraelectronvolts) have been detected from the galaxy in question.

Neutrinos are subatomic particles with no electrical charge and almost no mass that pass by the trillions every second through our bodies and from every part of the Earth. Because they rarely interact with matter, they are difficult to detect. Unlike light, neutrinos can travel from various parts of the universe to Earth almost undisturbed by the interfering matter and electromagnetic fields of extragalactic space.

Some neutrinos that reach Earth interact with the ice and create other particles (muons), which emit momentary flashes of light that are picked up by IceCube’s approximately 5,000 optical sensors. The patterns of light are then used to make inferences about the direction of origin and energies of the neutrinos.

So-called neutrino astronomy is an additional tool for understanding the most extreme objects in the universe. The first detection of cosmic neutrinos by the IceCube Observatory – which started operating in 2011 – was made in 2018, with a possible source of origin being the distant galaxy TXS 0506+056. The more sophisticated IceCube-Gen2 Observatory under construction, a more sensitive second-generation detector, will be able to “catch” many more neutrinos from cosmic sources such as black holes that accelerate subatomic particles in a manner analogous to Earth-based accelerators such as CERN.

Facebook
Twitter
Pinterest
WhatsApp
Previous article
Staikouras: Freeze interest rates for overdue and settled debts at the tax office for one year
Next article
Another large part of a Chinese rocket will fall uncontrollably to Earth and no one knows where