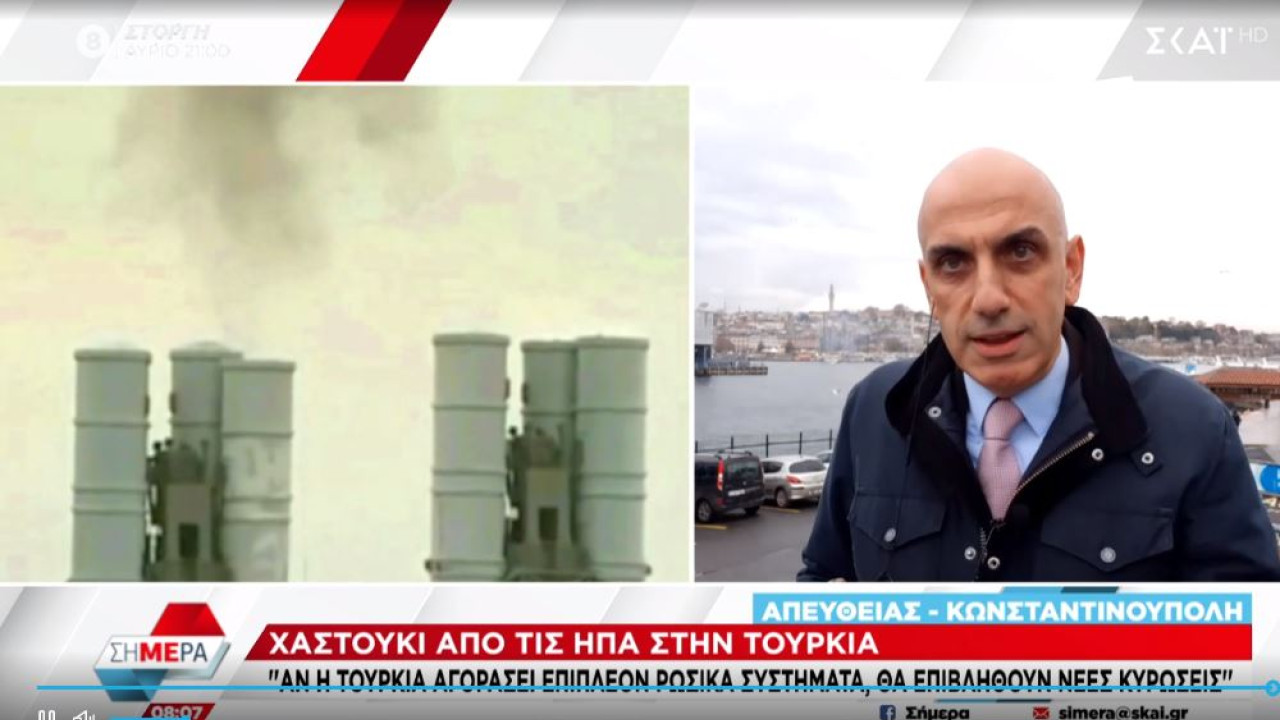 Turkey slapped by the US: They threaten it with new sanctions if it buys additional systems from Russia

The USA is threatening Turkey with new sanctions, as SKAI correspondent Manolis Kostidis reports from Istanbul.

The US gave a harsh response to Turkish Defense Minister Hulusi Akar for the S-400, threatening at the same time with new sanctions, <as SKAI correspondent Manolis Kostidis reports from Istanbul.

The State Department’s position came in the wake of the statement by Turkey’s defense minister, Hulusi Akar, which claimed that Ankara will use the Russian S-400 system. Responding to a question from Greek correspondents, a representative of the State Department clarified that any new transaction with the Russian defense industry entails the risk of additional CAATSA sanctions.

As he noted, “our position on the S-400 system has not changed: the Russian S-400s are incompatible with NATO equipment, threaten the security of NATO technology, and are inconsistent with Turkey’s commitments as a NATO ally.” .

The statement concludes: “We urge Turkey, and all US partners and allies, to avoid future purchases of Russian weapons, including additional S-400s, that provide Russia with revenue, access and influence. Any such transactions they could be subject to sanctions CAATSA separately and in addition to those already imposed.”

Journalist Gürkan Zengin reported: “It seems that because of the S-400s, the fleet of the Turkish Air Force will wear out, and since we will not be able to renew it, the S-400s will be the mechanism and system that will fill the gap in our security.” .

Let’s use it fully with all systems because it is the only real anti-aircraft system that Turkey has, apart from fighters it is the most advanced system in the world. Let’s get it, let’s install it everywhere.”

The director of the Edam political research center Sinan Ulgen said: “But the S-400, of course, I will compare them with the Patriot. Because the S-400 will operate blindly in Turkey. They will be ‘blind’.

“Exactly because they will only operate with their own radars and will not see the targets from our radars” replied Sinan Ulgen.

Erdogan: The West is annoyed

Meanwhile, in a speech yesterday, Mr. Erdogan he said: “They feel uncomfortable with the strengthening of Turkey’s regional leadership. They feel uncomfortable from the millennial presence of our nation in Anatolia. Moreover, they still don’t even see the need to hide all these annoyances, they say it openly.”

The Turkish opposition “reminds” Erdogan what he had said about Sisi. In fact, they also prepared a video with Erdogan’s statements against the Egyptian president.

Meral Aksener, president of the Good Party, said: “Since you would come to this point, why did you cause so many losses in Turkey, Mr. Erdogan. Who will account for our country’s losses in the diplomatic, military and economic fields? You should come out and say ‘I’m sorry, if I hadn’t made this mistake, in the Eastern Mediterranean instead of Greece and Egypt signing agreements, we could have agreed’.