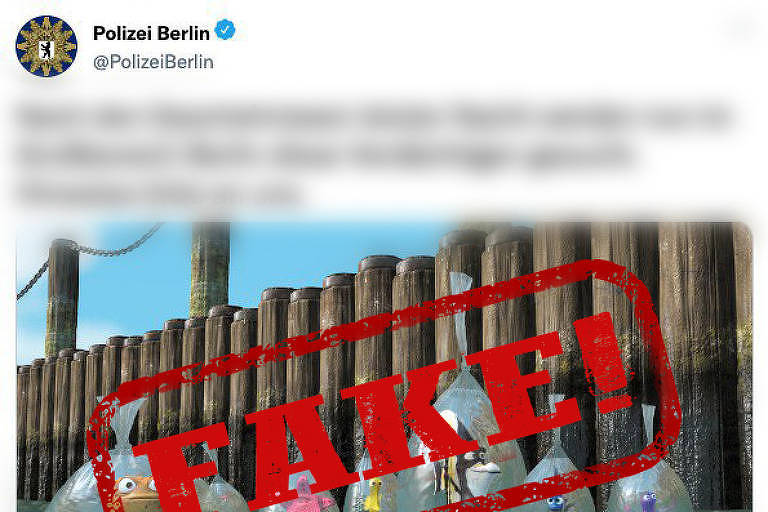 The seriousness of the explosion that killed almost 1,500 fish and spilled more than a thousand tons of water through the center of Berlin this Friday (16) did not stop the internet from reacting as usual – producing memes.

One of them, however, bothered the Berlin municipal police. The montage consisted of a fake tweet from the agency’s official profile showing a scene from the animated movie “Finding Nemo” in which the aquarium fish that had helped Nemo to be reunited with his father appear in plastic bags, floating in the ocean.

The image was accompanied by the message: “Following last night’s incidents, these suspects are now being sought in the greater Berlin area. Please send us any information.”

It was, of course, a joke — one that Berlin officials chose not to endorse. “A fake tweet is currently circulating that shows the Berlin police satirically looking for the suspects in today’s operation at the AquaDom. We expressly dissociate ourselves from it!”, wrote the organ on the platform.

Police also clarified that they are not looking for any suspects in the incident. On Friday itself, she had told the local press that there was no evidence that it had been a planned attack.

The cause of the explosion is still unknown, but it is suggested that the low temperatures in the country caused cracks in the structure, which ended up giving in to the pressure of the thousand tons of water. There are still suspicions that there was material fatigue.

Reynolds Polymer Technology, the American company that built and installed the AquaDom’s acrylic window, sent a team of specialists to the site to investigate the factor or factors that caused the incident.

The German press drew attention to the fact that, by trying to stop the meme, the Berlin police may have caused the so-called “Streisand effect”, which occurs when an act of censorship only increases curiosity about the removed content, making so that it not only continues to circulate, but also gains strength.

The phenomenon got its name from a case in 2003, when a photographer took a picture of the mansion of American singer Barbra Streisand. At first, the image went unnoticed. But when the artist filed a lawsuit against the author, the number of searches for the photo progressively increased.

Despite the jokes, another part of Internet users used social networks to demonstrate against the very existence of AquaDom, accusing the enterprise of infringing the rights of animals. This was the case for Amnesty International Secretary General Agnès Callamard, who said in a Twitter post that the episode was a “metaphor for human arrogance, endless consumerism and the thirst for strong emotions, with devastating consequences for other species.” .

This Saturday (17), activists in defense of animal rights held a vigil in front of the hotel where the aquarium exploded. About 10 demonstrators lined up on the sidewalk in front of the Radisson Blu in the center of the German capital in the early afternoon with signs that read: “Fish are friends, not decoration” and “Rest in peace, family of butterfly fish “. Participants even placed lighted candles on the sidewalk.

Facebook
Twitter
Pinterest
WhatsApp
Previous article
Opinion – From Grain to Grain: Find out if it is worth taking advantage of the PGBL contribution this year
Next article
King Charles invites Prince Harry and Meghan to his coronation