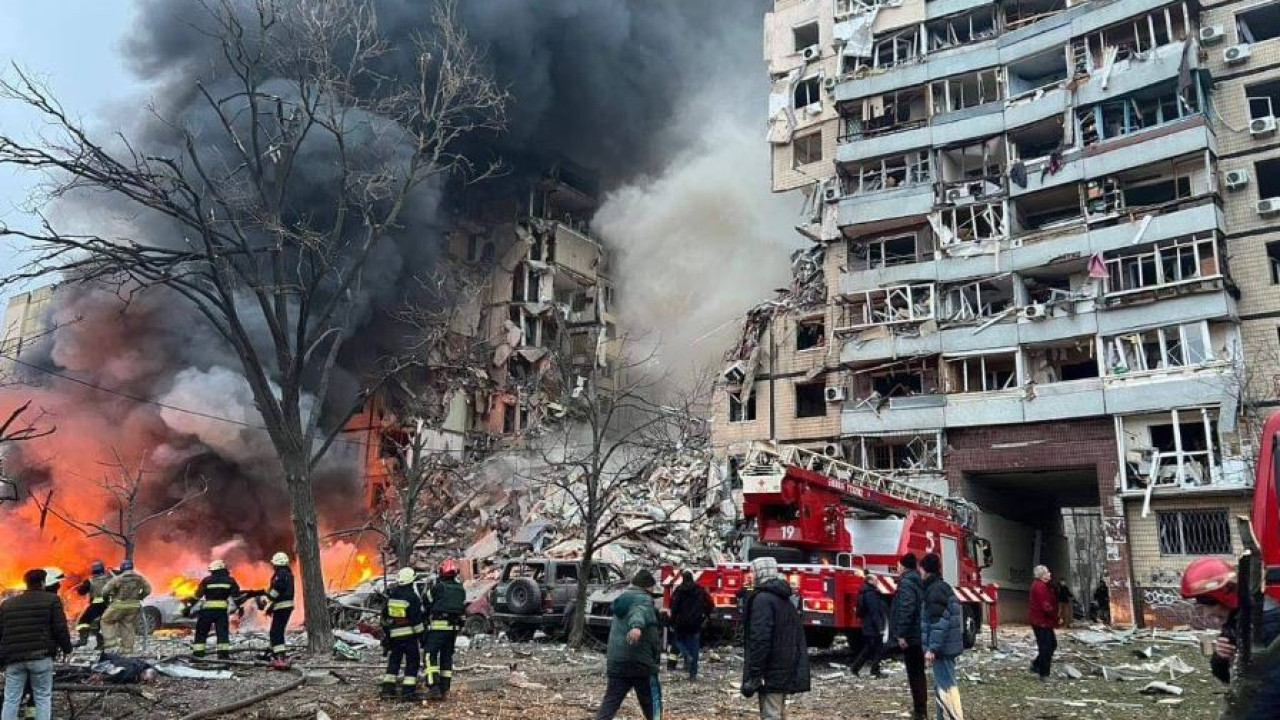 War in Ukraine: The Russians bombed an apartment building in Dnipro – Dozens injured and trapped

At least 10 people, including two children, have been taken to the hospital – Russian pounding in the last hours – Sirens and explosions in Kyiv – We have Soledar, say Ukrainians

An apartment building in the eastern Ukrainian city of Dnipro was heavily damaged in a Russian missile attack today and people are trapped under the rubble, said Kirylo Tymoshenko, deputy head of the Ukrainian president’s office.

“They (the Russians) are just inhumane. At least one stairwell has been destroyed. Under the rubble are people who were in their homes,” he said.

At least 10 people, including two children, were injured in the Russian raid, according to the latest information. Kirylo Tymoshenko, deputy head of the Ukrainian president’s office, said 15 people had been rescued from the rubble so far.

The mayor of Kyiv said that explosions could be heard in the capital and that air defenses were in operation.

Sirens are sounding across Ukraine

Air raid sirens are sounding across most of Ukraine and officials are urging residents to take shelter from possible Russian airstrikes.

We have Soledar, say the Ukrainians

The small town of Solentar in eastern Ukraine, the center of a fierce battle between Ukrainian and Russian forces that Moscow claims it has captured, is still “under Ukrainian control”, the governor of Donetsk region, Pavlo Kirilenko, said today.

“Solentar is under the control of the Ukrainian authorities, our forces are in control of it,” he said, adding that this location and the nearby town of Bakhmut are the “hottest” spots on the front.

Tanks and from London to Ukraine

“During a conversation with Prime Minister Rishi Sunak, I thanked him for taking decisions that not only strengthen us on the battlefield, but also send the right message to our partners,” Zelensky wrote on Twitter.

The military aid of Poland and Lithuania to Ukraine can be an “example” for other countries, Ukrainian President Volodymyr Zelensky had said days earlier.

It is recalled that Poland also plans to send Leopard tanks to Ukraine as part of an international coalition, the Polish president said today.

Kyiv has requested heavy military vehicles such as the German-made Leopard 2, which would be a major boost to Western support for Ukraine.

“A fleet of Leopard tanks will be delivered as part of coalition building,” Andriy Duda said during a visit to the western Ukrainian city of Lviv. “We want this to be an international coalition.”

Polish Prime Minister Mateusz Morawiecki said last Saturday that Poland does not intend to send Leopard tanks to Ukraine without the formation of a wider coalition.

German Chancellor Olaf Scholz said Monday he remains convinced of the need to coordinate with allies on arms deliveries to Ukraine.

However, a German government spokesman said today that he was not aware of any requests from its allies to send Leopard tanks to Ukraine.

In his statements on Polish public television (TVP), Zelenski described the acquisition of Leopard tanks from Poland as “strategic importance”, underlining that “someone must always lead by example” and expressing the hope that “other countries may also follow the footsteps of Poland and Lithuania”.

On Wednesday, the president of Ukraine welcomed his counterparts from Poland, Andriy Duda, and Lithuania, Gitanas Nowseda, to Lviv.

The Polish president briefed Zelenskiy on Warsaw’s decision to deliver Leopard tanks to Ukraine, while his Lithuanian counterpart announced that Vilnius would bolster the Ukrainian army with anti-aircraft weapon systems.

Facebook
Twitter
Pinterest
WhatsApp
Previous article
Harry: I have material for a second book too but if I tell everything they will never forgive me
Next article
Erdogan: At any time we can decide a military operation in Syria