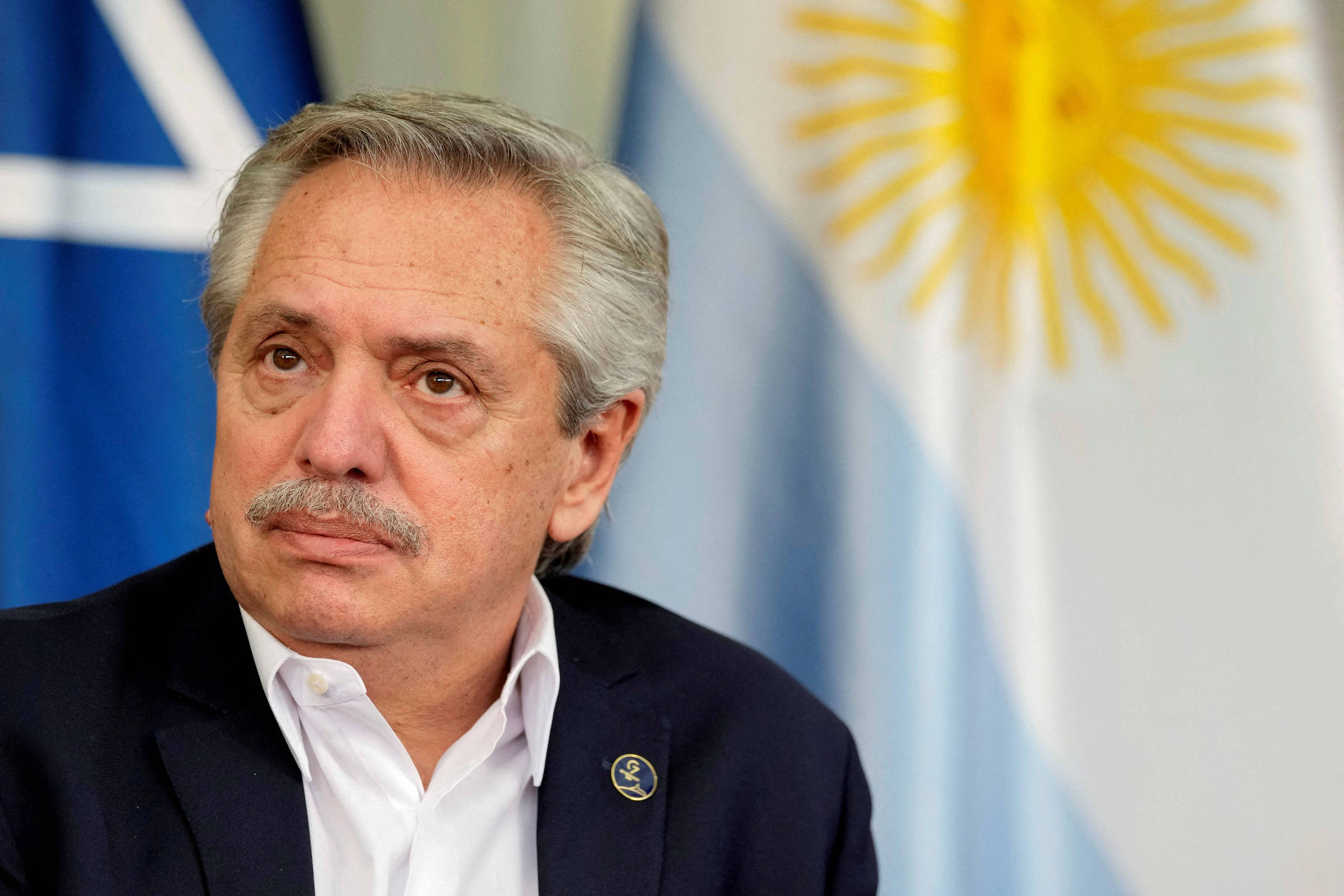 Argentina has Armed Forces aligned with institutions, attack would be difficult, says Fernández

Shortly before receiving Luiz Inácio Lula da Silva (PT) in Buenos Aires on his first trip abroad after assuming the Presidency for the third time and hosting the seventh meeting of CELAC (Community of Latin American and Caribbean States), the Argentine leader , Alberto Fernández, foresees a difficult year.

“The real negative consequences of the War in Ukraine will begin to be seen now, and of the millions that the FAO [Organização das Nações Unidas para Alimentação e Agricultura] anticipated that they will starve, many may be Latin Americans”, he says. “In addition, we have to worry about the institutional framework of our region. What is happening in Peru is very serious.”

The Argentine leader also praised the way Lula reacted to the coup attacks in Brasilia and stated that something like this would hardly happen in Argentina, because the country has, according to him, “Armed Forces aligned with institutionality”. “We must be alert, not allowing this to happen anywhere.”

In an interview with Sheet on Thursday (19), at the residence of Olivos, Fernández said that, despite high inflation —almost 100% a year— and the increase in poverty in the country —more than 40%—, he is certain that his successor will be a Peronist —and does not rule out being the candidate. Argentina will hold presidential elections this year.

What is the importance of Brazil’s return to Celac? I’m ending my mandate at the head of Celac, and, in this difficult time, [o órgão] it was an important mechanism to bring Latin America’s voice to the Summit of the Americas and the G7 and to participate in the discussion on the conflict between Ukraine and Russia. The year that begins is decisive because most of the consequences of the war will begin to be seen now. And when the FAO says that 300 million people will starve, it worries us a lot, because we know that many of those people could be from Latin America. And we live in a particularly turbulent time for the region, in which we have to work to guarantee the institutionality of democracy.

It is a good moment for Brazil to return to Celac. It is too important a country to be absent from international forums, as happened with Bolsonaro. It was very hard not to see the country with the voice it always had. Now, Celac begins a phase of regional integration in which Brazil will play a leading role.

Brazil was also absent from Mercosur, also threatened by Uruguay’s attempts to negotiate treaties outside the bloc. Have you been talking to Lula about this? Yes, these last few years have been bad for Mercosur. But not so much due to the actions of the [presidente do Uruguai] Lacalle Pou. I even think it’s great that Lula visits him soon after. I have a good relationship with Lacalle Pou. I can disagree with ideas, but personally I never had a problem, it didn’t even come close to being similar to what my relationship with Bolsonaro was. With Lacalle Pou I was always able to talk. What I don’t agree with is his method.

Globalization is changing shape. What used to be fashionable, “industrial relocation”, which led German or French companies to produce sneakers or other products abroad, is now experiencing the opposite moment. These companies are returning to their countries, leveraging the regions. Uruguay must understand that it must seek objectives as a partner of a region. This is the role of smaller countries, while that of the larger ones is to address the asymmetries that exist, to remove obstacles for smaller countries.

How do you see the Ukrainian War? Is Argentina going to pronounce again on this? I didn’t stop talking to [o presidente Vladimir] Putin, but we never supported the invasion. The last time I spoke with him, when he called me to congratulate me on Argentina’s victory in the Cup, I said again that it was necessary to sit down to resolve this issue. And I continued to make it clear that Argentina does not support this invasion.

What did mr. What do you think of the violent episodes in Brazil after Lula’s inauguration? Something similar could happen in Argentina? What Brazil experienced should call the attention of the country and the continent. Lula solved the problem very well, summoning the other two Powers and defending Brazil’s institutions. Something like this would hardly happen in Argentina, because we have Armed Forces aligned with institutions. But we had a very serious episode, which was the attack on Vice President Cristina Kirchner. There is a certain sector of the Latin American right that thinks that violence is an adequate way to fight democracy, to threaten society. We must be alert, not allowing this to happen anywhere.

There has been a change in the region right? Yes, in certain sectors some characteristics were enhanced, in the wake of what was the management of the [ex-presidente dos EUA] Donald Trump. In Latin America, we have a right that is very strong. In Chile, Boric won the election, but 45% of the population voted for a proposal with Nazi characteristics [em referência ao candidato derrotado, José Antonio Kast]. Here, I won, but the right had 41% of the votes. In Colombia, the difference was similar. Brazil’s election was also hotly contested. It is more difficult to build large majorities and it is necessary to learn to deal with it and to defend institutionality. It is one thing to have political debate, rivalry, another are threats to institutionality, as has been happening in Peru.

The possible presence of the Venezuelan leader, Nicolás Maduro, at Celac has generated controversy among the Argentine opposition. Why do you defend? Venezuela is part of CELAC, and Maduro is more than invited. As far as I know, it will. Argentina’s position in relation to Venezuela is to encourage, through the Contact Group, the dialogues being held in Mexico. We believe they can give good results. The idea is that Venezuelans decide things among Venezuelans, not with us.

The level of commercial relations between Brazil and Argentina has dropped significantly in recent years. How do you expect to get it back? We will deal with this during Lula’s visit, Brazil is still Argentina’s main trading partner, but much has been lost in recent years. One possibility that excites us is to work harder in the production of electric cars, to use more lithium, which exists in large quantities in Argentina, to further enhance our integrated automobile production.

Is it true that you and Cristina Kirchner are fighting for Lula’s friendship? And that Lula would be worried about the friction between you? no, not at all [risos]. I may have differences with the vice president, but if we have a coincidence, it is that Lula is a very special person for us. There are two parallel links. But it is true that he is concerned that the Peronists stick together.

You are in the last year of your mandate. How do you rate it? Will he run for re-election? Sociologists say that phenomena have to be analyzed at a given time and in a given society, which means that not all of us are the same. I say this because I believe that the disaster of the Macri government was very difficult to succeed. Starting right after the coronavirus pandemic, ruling two years into the pandemic and then entering a war that changed the world’s economic equation. Taking this whole context into account, it is a government that has been working well. It is true that the pandemic affected us a lot, but also that we quickly sought vaccines and provided assistance to Argentines.

Today, the economy has serious problems, but on the other hand there has been a high recovery in employment and for the first time Argentina will grow for three years in a row, in addition to having restructured our debt. Now, if you ask me if I’m satisfied, no, the poverty and inflation figures are very worrying.

Will you be a candidate? Are the chances of the opposition growing? I’m sure the [aliança] Front of All, Peronist, will win. If they think I’m the candidate, I could be, or another of our leaders. The only thing I don’t want is for Macri to win again. Macri or anyone from his circle, Macri and what he represents, which is the opposite of what we did. Everyone is Macri on the other side [em referência a Horacio Larreta e Patricia Bullrich, que manifestam desejo de concorrer].

Graduated in law, he joined the government of Raúl Alfonsín (1983-1989) in the position of Deputy Director General of Legal Affairs at the Ministry of Economy. During the management of Néstor Kirchner (2003-2007), he was chief of staff. He assumed the Presidency of Argentina in December 2019 after defeating Mauricio Macri.