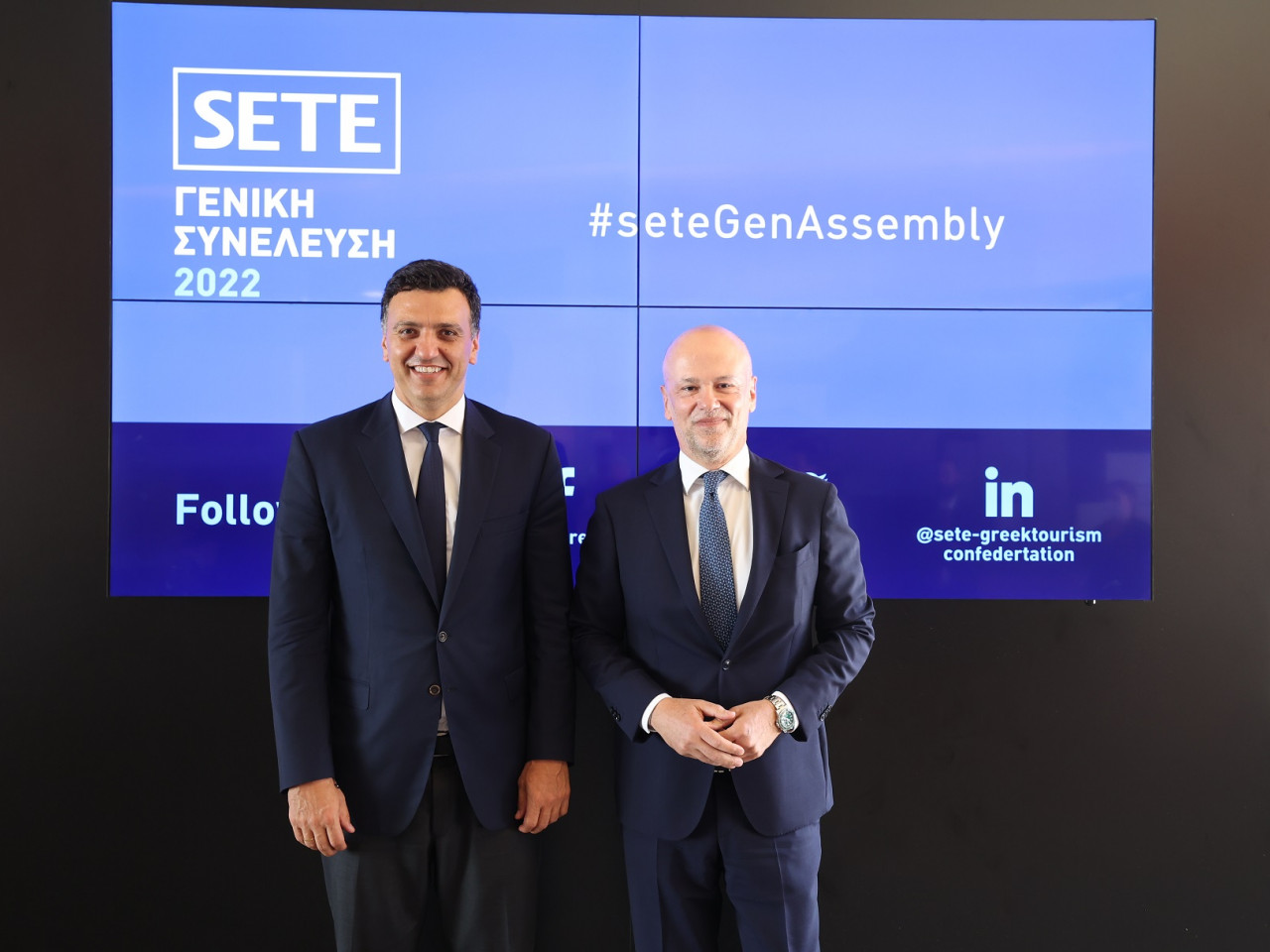 The President of SETE, Giannis Retsos, stood at the evolution of the Greek tourism market during the Annual General Meeting of the Association of Greek Tourism Enterprises

The 30th General Assembly of SETE began with his greeting President of SETEK. Giannis Retsouand continued with the intervention of the Leader of the Official Opposition, Mr. Alexis Tsipras, in a conversation with the journalist, Ms. Stella Gandona.

Afterwards, the speech of the Minister of Tourism took place, Mr. Vassilis Kikilias. The Minister developed “the institutional initiatives and targeted strategies that the Ministry of Tourism has formed, in recent months, for the successful rebranding of the country abroad.” At the same time, he added: “Since last September, still facing the problem of the global health crisis, we have worked hard and worked as a team with a dual goal. On the one hand to be able to open the tourist season earlier and on the other hand to strengthen the conditions for the increase of the travel receipts.

Our ally in this effort is the re-establishment of the country as a modern country that has successfully managed to face the pandemic and open it safely. In this context, we negotiated with the major international market players in order to bring the beginning of the tourist season earlier but also to extend its end to the end of the year. We pressed and managed the airlines to increase capacities and add new routes and destinations. “We talked to the big touroperators about ways to come up with new destinations.”

This was followed by the keynote speech of the President of SETE, Mr. Giannis Retsou, who, among other things, stressed that “Greek tourism is a guarantor of stability, development and social cohesion for all.” At the same time, he referred to the 4 central and timeless as it turns out goals that SETE has set for Greek tourism, which concern:

As he characteristically noted: “Too much has been done, but we must never rest. We must continue to work, to always be one step ahead».

He also referred to the criticism leveled at issues that mainly concern issues of working conditions and pay. In this context, he pointed out: “SETE’s position on such a serious issue is timeless. No violation of labor rules can be tolerated. No derogation from the current legislation is justified. No tolerance for arbitrariness is encouraged. We are clear and unequivocal. Because that’s the only way to protect our product. Quality tourism with workers in gray conditions, can not exist. And for this very reason, the state needs constant and strict control to identify violators and their exemplary punishment. We also need strict observance of the laws, without discounts and exceptions. We are the first to want to separate the rye from the wheat. The professional who pays taxes, who offers jobs and development, from the adventurer who considers tourism as an easy source of wealth. But something else is needed. An open dialogue, without prejudices and blinders, on a new strategy for working in tourism. SETE is ready to start with all interested parties, social partners and the state, a bona fide and honest dialogue, always guided by the good of Greek tourism and the Greek economy “. Then the recorded speech of the Prime Minister, Mr. Kyriakos Mitsotakis was shown.

The General Director of INSETE, Mr. Elias Kikilias, presented the actions of the Institute and underlined that: “The continuous disturbances that shape the international environment require the continuous strengthening of resilience and adaptability for companies and destinations. For INSETE, this environment is a great challenge and we systematically invest in the investigation of the critical factors that already have a primary role in the developments of the tourism sector. “Sustainability, digital transformation, human resources and the use of data, especially bigdata, for strategic information are among our priorities, with the ultimate goal of contributing to the collective effort to maintain and upgrade Greek tourism its leading role.”

The actions of MarketingGreece were presented by the Vice President of the company, Ms. Agapi Sbokou, who stated that: “Our tools at MarketingGreece – and this time – as in any other challenge we have faced are always dynamic, flexibility, professionalism, fast reflexes and empathy. With these weapons, MarketingGreece contributes steadily to the development of Greek tourism. It gains recognition from the market, the State and – above all – gains acceptance in the global market which is what is required. This is one of our timeless goals: our values ​​to make us resilient and effective ..

This was followed by the statements of the President of AEGEAN, Mr. Eftychios Vasilakis, the CEO of Eurobank, Mr. Fokion Karavia and the President and CEO of OTE Group, Mr. Michalis Tsamaz.

The President of AEGEAN, Mr. Eftychios Vasilakis pointed out, among other things: “This year, after two years full of challenges, we have the opportunity to start our activity early by doing what we know best for each traveler and Greek tourism. However, as new challenges emerge, our primary goal is to invest and emphatically support the level of service that both we and tourism operators as a whole have managed to offer in the pandemic and to strengthen the Greek brand, managing better from others the problems we see internationally. Of course, remaining equally committed to the need for longer-term interventions aimed at further diversification and diffusion of the tourist product in more areas and the extension of the tourist season.

The CEO of Eurobank, Mr. Fokion Karavias stressed, among other things, that: “Tourism entrepreneurship, which supported Greece during the crisis, is a leading player today in the development phase. Eurobank, a tourism bank, is on the side of the industry to finance the necessary investments so that all businesses, small, medium and large, can take advantage of the window of opportunity that opens. With the Recovery Fund and other Greek and European programs, with robust banks and international investment interest, we can today upgrade the country’s tourism product and lay the foundations for long-term efficiency and environmental sustainability. So that the records that are expected this year are just the beginning “.

The President and CEO of OTE Group, Mr. Michalis Tsamaz, stated in his speech: “The National Strategy for tourism is a long-term plan in the right direction. Its success depends on all of us. We must all do what we can to strengthen the country’s tourism brandname. The contribution of technology will be crucial. “Network infrastructure, digital maturity and modern applications are now criteria for the Greek and foreign visitor to choose his tourist destination.” He added: “You are not only businessmen and tourism executives, you are the” face of the country “. Your work is doubly important. And all of us at the OTE Group are by your side “.

The General Assembly of SETE was held under the coordination of the General Director of the Association, Mrs. Maria Gatsou.

Facebook
Twitter
Pinterest
WhatsApp
Previous articleMitsotakis: EU to set a milestone for the integration of the Western Balkans in 2033
Next articleMichel: I am convinced that we will grant candidate status to Ukraine and Moldova