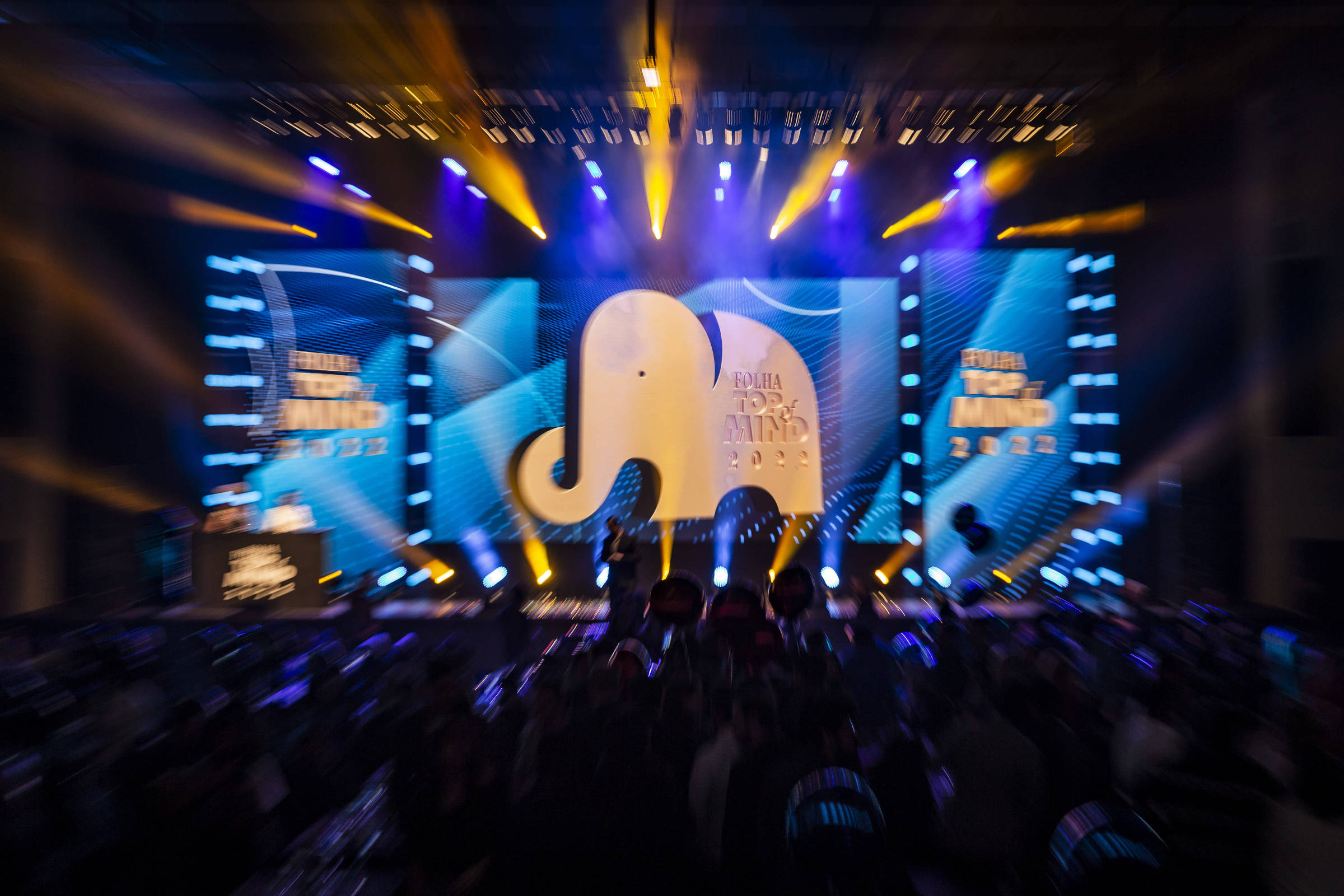 1,500 professionals from the most remembered brands celebrate delivery of the Top of Mind

After two years, the delivery of the Folha Top of Mind awards took place again this Tuesday (25), at Tokio Marine Hall, in the south of São Paulo. The event released the results of the 32nd edition of the survey carried out by Datafolha, the largest and most complete survey of brand recall in Latin America.

In a festive atmosphere, the space brought together around 1,500 people, including executives, entrepreneurs, marketing directors and brand representatives, celebrating winners in the 83 categories listed by the study. Some came with groups in the best organized cheering style, with uniforms, confetti, balloons, vuvuzelas and even mascots.

This energy is felt by Katielle Haffner, head of ESG corporate relations at Coca-Cola Brazil. “For us, being connected with people, being able to live this experience again, is super gratifying”, says the executive, who claims to represent 53,000 employees at the event when she received the award for the brand in the Top of the Top category.

Haffner also comments that the victory takes place on the 80th anniversary of Coca-Cola in Brazil, which in turn coincides with annual investments of R$ 3 billion for social and environmental projects in the country. “It’s a consumer acknowledgment, and that’s what makes it all worthwhile.”

André Natal, interim CEO and CFO of Vibra Energia, talks about overcoming when mentioning the return of the award in person. The group owns two brands featured in this year’s Datafolha survey: Petrobras/BR, leader in the Gas Station category, and Lubrax, champion in Lubricating Oil.

“We were awarded with more than one brand, and we always need to raise the level of attention so that they reach the level they are at”, he says, who highlights the effort of the teams behind the products. Attention to sustainability permeates the work, with Lubrax redoubling its care with the management of manufacturing waste and BR installing 70 electric stations in its network by the end of 2023.

Another one at the top of the Gas Station category and responsible for the first electrified road in the country, Ipiranga was also present. “We are proud to be able to represent our sector”, says Luciana Domagala, vice president of people management at the brand, who adds that the award is a great opportunity to feel the human warmth and recognition of the public.

Anna Karina Pinto, corporate marketing director at Samsung Brazil, agrees with the statement. She comments that she considers the event to be fundamental: “We already have a history of years in the Top of Mind, it is an incredible and fantastic recognition and Samsung understands that this type of award brings very important visibility.”

Samsung, according to her, works on translating technology and innovation to empower people. The company, which won a total of six Top of Mind awards, is still concerned about a sustainable future, having announced in September a new environmental strategy that involves zero carbon emissions by 2050.

Who shares this pillar is Omo, present in the Top of the Top for 29 consecutive years. Vinicius Menezes, the brand’s marketing manager, is grateful for the recognition of the work on the subject of sustainability: “It is an honor to be remembered by our consumers as a brand that is always concerned with delivering excellent products and that made history in Brazilian communication.”

Beatriz Seabra, marketing manager at Comfort, celebrates the achievement in Top Fabric Softener, which returns after seven years. “Comfort was the first brand of fabric softeners in Brazil, it is very nice that until today it is the most recognized and loved on the market”, she says. This accompanies the renewed care for the environment, for which the brand has launched packaging made with 100% recycled and recyclable plastic.

For Stephanie Arnesen, Nestlé’s milk marketing director, the return of the in-person event marks the celebration of Ninho with the results, reaching 17 victories in 2022 in 27 editions of the Milk category. It is a consecration of the strategy’s reorientation towards the theme of sustainability: the brand encouraged the adoption of good practices among suppliers, launched products of plant origin and worked on advertising to educate the public on issues such as the conscientious use of water.

“Being recognized as Top of Mind is very relevant because it shows that all this work that we have been doing to deliver the best milk is also recognized by the consumer”, he explains.