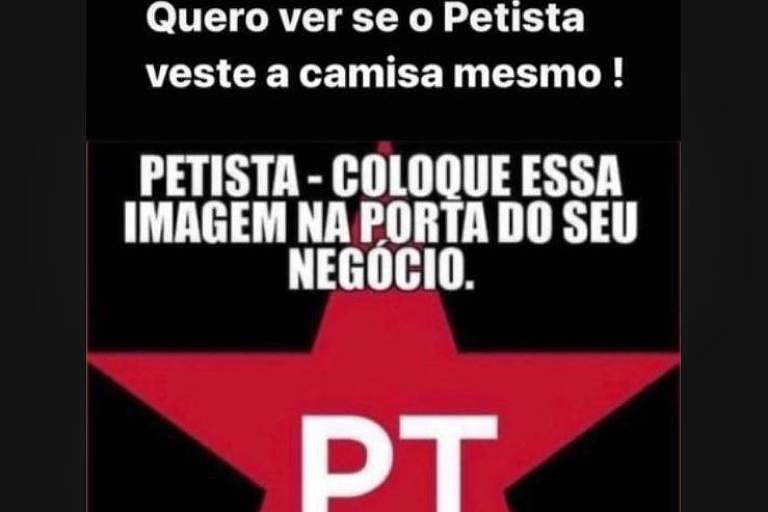 After the second round of the elections, the spirits between Bolsonaristas and PT show no signs of cooling off. At the same time that supporters of President Jair Bolsonaro (PL) occupy highways and stage coup demonstrations in front of barracks, voters of former president Luis Inácio Lula da Silva (PT) report situations of harassment and even inclusion in lists of professionals and companies that should be boycotted.

In the calculations of businesswoman Laís Savassa, 32, from Boituva (SP), the attacks that began on Monday (31) have already left a loss of about R$10,000 in the two stationery stores in which she is a partner. The day before, voting day, she got together with friends to follow the count.

“On the day, we celebrated, we made posts on social networks. The next day, we were on that list”, he says. “My profile was closed and I never linked the stationery to anything. It was a manifestation of an individual.”

Boituva’s “PT trade list” is not the only one. There are reports of similar relationships in several states. On Twitter, a parody profile of Sleeping Giants (which pressures companies to remove ads from sites that publish fake news or hate speech), called “Sleeping Zap Brasil”, is publishing profiles of companies and their owners. These are people who, according to them, deserve to be “demonetized”.

In Dourados, the second largest city in Mato Grosso do Sul, a 47-year-old consultant says she was on the list of professionals and companies to be boycotted after she criticized the existence of these surveys.

The company her husband works for also ended up in the boycott relationship, she says, after he reacted to a xenophobic comment on the neighborhood WhatsApp group. The consultant asks not to be identified for fear of further retaliation against the couple and their children.

Anna Clara Brito, 25, also from Dourados, received the news on Sunday that she might need to change her apartment. “As soon as the result came out, the owner of the property sent a message saying that he was going to increase the rent and that if we wanted to leave, that was fine too”, she says.

She and her husband have no doubt that the request is related to the couple’s political position. In the message that communicated the readjustment, the owner of the property quotes the current president, who was defeated at the polls. “Since Bolsonaro lost, I want to save money,” he wrote.

In addition to boycotts, Bolsonaristas also encourage employee layoffs. On Monday, the tag #DemitaUmPetista came to be among the most cited terms by users.

A 21-year-old saleswoman told Sheet being fired on Monday on the grounds that she doesn’t fit the company’s standards. For the young woman, there is no doubt that the dismissal was politically motivated. Minutes before being notified of the layoff, she overheard her boss asking a manager “if she had seen the salesperson’s Instagram.”

The publications, according to her, were from a party where she celebrated Lula’s victory with friends. The young woman asked not to be identified, as she fears not getting a new position.

Tiago Botelho, a law professor at UFGD (Federal University of Grande Dourados), and who was a candidate for the Senate in this year’s elections, says he has received messages from residents of various regions reporting layoffs and even pressure from employers for their employees to participate in anti-democratic demonstrations started on Sunday night.

“I realize that people are very afraid to appear. They are already dealing with the damage of being on these lists, many have lost jobs and don’t want to risk not getting another one,” he says. “This gains a much larger proportion in conservative states.”

The MPT (Ministério Público do Trabalho) in Mato Grosso do Sul says that it is monitoring suspected cases of electoral harassment, but that, so far, it has not received reports of dismissals motivated by voting or participation in celebrations for the victory of any candidate.

Across Brazil, labor prosecutors this year registered an explosion of complaints of harassment committed by employers or superiors against employees to influence the vote. As of 12 pm on Thursday (3), 2,647 complaints had been made against 2,019 companies across the country.