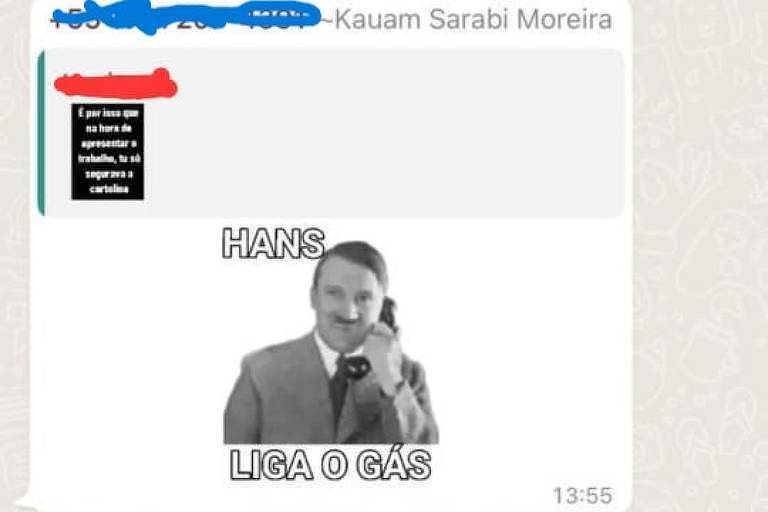 Banco do Brasil said it had removed one of its managers denounced by employees of its department for racial discrimination.

Kauam Sarabi Moreira made a Nazi joke in a professional WhatsApp group at the bank.

Wanted, he denied the removal. He said he is on vacation and will return to work normally in a month. He declined to comment on the messages on WhatsApp.

Through its advisory, BB said it repudiates any manifestation of discrimination and does not condone the apology against racial, cultural, religious or social groups, as provided for in its Code of Ethics.

According to reports made to the SA Panel, on Wednesday (9) bank employees were talking in the group about matters not related to work.

Moreira, who has a leadership position, responded to a comment with a montage of Adolf Hitler talking on the phone.

The text on the sticker made a request: “Hans, turn on the gas”. The reference goes back to the gas chambers in which Jews were killed by Nazis during World War II.

After what happened, no one reprimanded Kauam, a boss identified as abusive and with a history of moral harassment within the institution. The case, however, was reported to the internal ombudsman and is under investigation.

The bank has not yet authorized Kauam’s vacation. He was separated from socializing with employees, but must attend work normally until the vacation request is analyzed.

This Monday (14), one of the administrators of the group in which the conversation took place, sent a message to employees saying that the bank’s WhatsApp channels would be disabled and Microsoft Teams will be the only official channel for work-related matters.