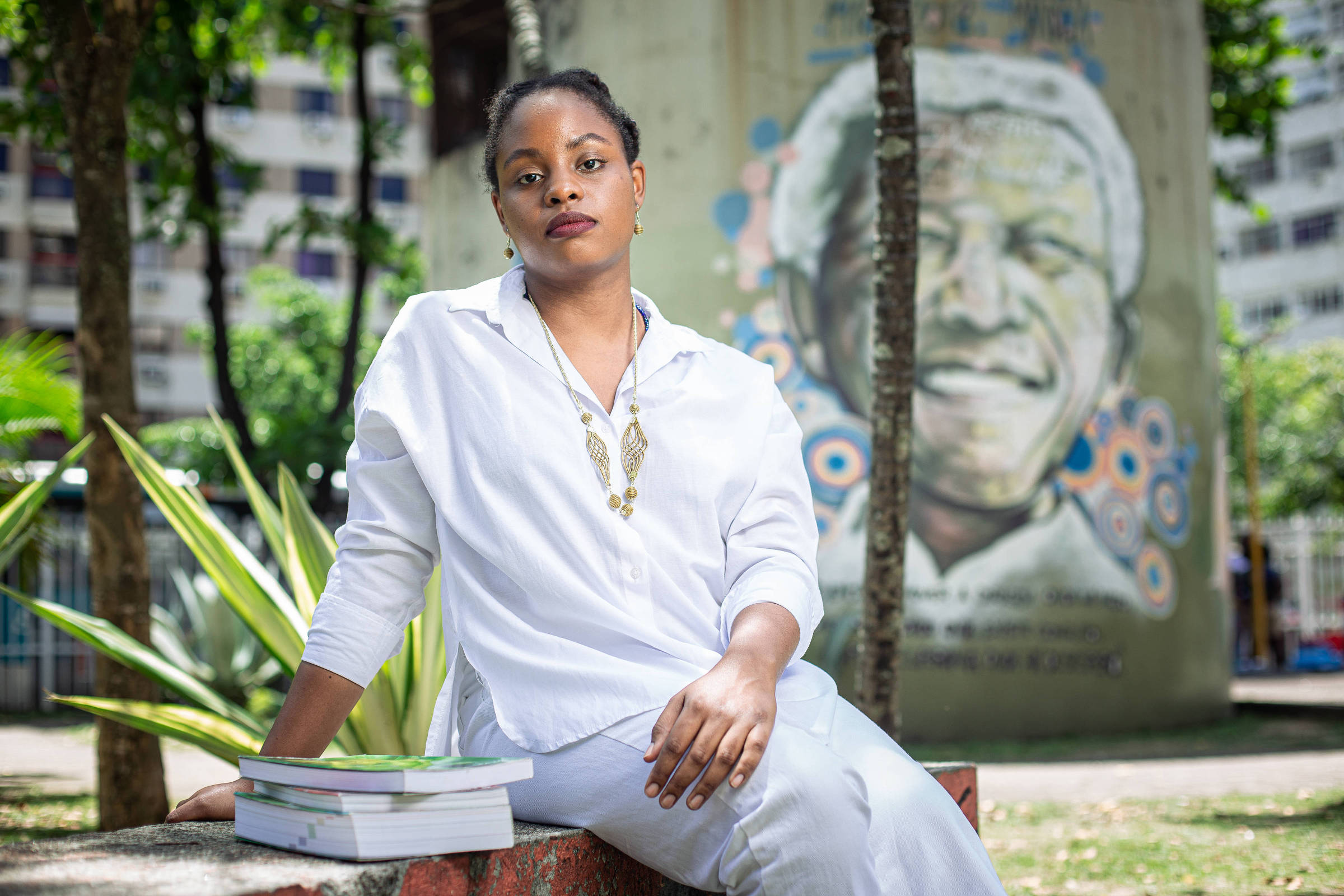 Completing a master’s degree in communication at UFBA (Federal University of Bahia), Mariana Gomes, 24, comes from a family that has been transformed by education. Her grandfather left the interior of Bahia to become a doctor, which encouraged the next generation to have a higher degree and, then, the generation of grandchildren.

As a quota holder, she was able to share graduation chairs with other black students. “My generation already has the reference of the university as a real possibility of maintaining this process of ascension and conquering basic rights.”

Now, in addition to seeing the need to maintain and improve policies on access to higher education, she wants to think about the next day. “It is necessary that more blacks and browns perceive education as a possibility to safeguard rights and advance in job opportunities and autonomy.”

Despite advances in increasing diversity in higher education, if the current pace is maintained, Brazil will take almost 116 years for blacks and browns to have access to the same opportunities as whites, according to the most recent edition of Ifer (Index Sheet of Racial Equilibrium).

While policies, such as the racial quota system, helped to improve the indicator of racial balance for education —and even so, the gap with whites should only be overcome in 34 years— the reduction in income inequality and longevity disappoints.

When considering income, the time required to break even is 406 years. In the case of survival or longevity, most of the country’s states are in relative racial balance, but the indicators have worsened towards imbalance, according to Ifer.

The index is a tool whose methodology was developed last year by Insper researchers Sergio Firpo, Michael França —both columnists at Sheet— and Alysson Portella.

It helps to measure the distance between racial inequality in the country and a hypothetical scenario of balance, in which the presence of blacks in the ranges with better living conditions would reflect their weight in the population aged 30 or over.

Its components are complete higher education, survival and presence at the top of the income pyramid, based on the PNAD (National Household Sample Survey), by IBGE (Brazilian Institute of Geography and Statistics). Throughout this month, other reports will detail what happened to these items.

The result is an indicator that varies from -1 to 1. The closer to -1, the greater the representation of whites in relation to blacks; the value very close to 1 points to a hypothetical scenario, in which the black population would have more representation.

To estimate the time remaining until equilibrium is reached, a calculation is made using the timeline of the data and considering the linear trend that is closest to what happened in the period. This trend is then extrapolated into the future, so you know how long it will take to reach zero.

IMPROVEMENT IN INEQUALITY IS TIMID, NUMBERS POINT OUT

In the most recent version of the index, the researchers compared the indicators for a period from 2001 to 2021 and concluded that the reduction of racial imbalance in the country progressed modestly.

In two decades, the general indicator improved by 0.071 points, going from -0.389 to -0.318, also pointing to the greater representation of whites compared to blacks.

During this period, the North region was the only one in the country that managed to reach the level of relative racial balance, which varies from 0.2 to -0.2. In the northern states, the general Ifer indicator went from -0.301 to -0.196 points.

“These are poorer societies too, with little room for very visible inequality. There is a certain homogeneity, including racial, in deprivation. They are economies with lower growth and income”, says Firpo, who is also a columnist for Sheet🇧🇷

Of the 27 Federation units, 22 improved, 4 worsened (Ceará, Santa Catarina, São Paulo and Sergipe) and 1 remained stagnant (Espírito Santo). In the case of states, as the sample base for some FUs is very small, we chose to use three-year moving averages, and the series ranges from 2004 to 2021.

When looking at the country’s general data, the small improvement was driven by the indicator that points to access to higher education, with an improvement of 0.223 points, from -0.598 to -0.375.

“Brazil still does not give blacks access to the elite. This has been reduced, but at a very low speed, which makes it clear how necessary it is to increase the number of inclusive public policies”, says Firpo.

He assesses that the reflection of the reduction of inequality should only start to appear more clearly in the other indicators after greater investments in professional qualification.

“Facilitating access to public universities is a historic and important demand, but the most efficient way to reduce inequality of opportunities is to integrate blacks and whites, rich and poor from an early age, to make the most excluded part of the population live with people who will expand your possibility of access to a set of opportunities ahead”, he says.

In this case, the calculation of income considers the proportion of blacks and browns who reach or exceed the income (including wages and other income) that separates the richest 10% whites from the remaining 90%, in addition to their population weight.

Survival data —despite remaining at the level of balance between blacks and whites, in most cases— point to a worsening: it was -0.052, in 2001, and went to -0.130 two decades later.

The calculation of the survival component in Ifer is similar to what is done for the income indicator: the group of 10% older whites is extracted and the age that separates them from the remaining 90% is calculated.

The negative highlight is also the Southeast, where the Survival index went from -0.104 to -0.202, moving from the equilibrium level to that of greater white representation.

Even celebrating the advances in part of the indicators, the experts heard by the report highlight the need for public policies aimed at combating racism, both in the labor market and in the public service network, so that the other indicators also advance.

“It’s not enough that only education improves, each one of the components has the same weight and should be consistently observed by public policies to reduce inequality”, says França, who is also a columnist for Sheet🇧🇷

He also points out that the worsening survival rate in the period, which is heading towards an imbalance, may indicate the difference in access to private health plans, a factor in which the white population always has an advantage, and the lack of adequate investments in the SUS. (Health Unic System).

“As for the income component, it is necessary to start discussing more seriously the barriers that exist for blacks. We expanded access to higher education, but this is still not reflected in better jobs in the labor market”, he adds.

In addition to education, health and income, factors such as privileges linked to skin color and economically healthy family structure help to explain the timid fall in the imbalance between blacks and whites”, says Portella. “Reaching the 10% most privileged in Brazil is difficult. In such an unequal country, small gains are often not enough to place [os negros] on the top.”

Regarding regional differences, he adds that places with a higher concentration of income, such as the Southeast, have additional obstacles for the black population, given the economic privilege of whites.

“Really rich people have networks of contacts that play a very important role [na ascensão social]🇧🇷 So, for a black person from the periphery, it will be very difficult to access a network that will allow you to join this group; as a white person it is easier to stay there, “he says.

“The population [negra] it also ends up being more vulnerable to economic cycles and government decisions”, evaluates Marcelo Paixão, economist and professor at the University of Texas. According to him, despite symbolic and material improvements in the imbalance between whites and blacks in Brazil, times of economic crisis or high inflation, tend to affect black people more.

For Paixão, inequality goes through cycles, in which it can decrease and worsen in different historical periods. However, the lack of a more organized family structure, the difficulties in accessing the formal job market and Social Security are greater for blacks.

“Equity is giving specific tools to groups that had an inequality of opportunity at the beginning. If you are born into a family that manages to overcome the inefficiency of the public sector, your child leaves in front”, says Carla Beni, economist and professor in the FGV MBA ( Getulio Vargas Foundation).

She points out that discrimination also impairs the relative balance between blacks and whites. “The fallacy of meritocracy makes it difficult to deepen the debate and create new policies to increase the representation of the black and brown population in the country”, she says.

For economist Mário Theodoro, author of “A Sociedade Desigual – Racismo e Brânquitude na Formação do Brasil”, there is still a lack of policies aimed at reducing inequality.

“A study I did during President Lula’s previous administration showed the reduction of poverty among blacks and whites, but now it is necessary to think about mechanisms that favor the poorest blacks. Universal policies are fundamental, but if they are not complemented by policies of combating racism, the level of difference will remain.”

Facebook
Twitter
Pinterest
WhatsApp
Previous article
Opinion – The World Is a Ball: No time for the World Cup? 1st phase has 48 games; see those from Brazil and two more
Next article
Tragedy in Arta: The 60-year-old accused of murdering his brother was given a deadline of Monday