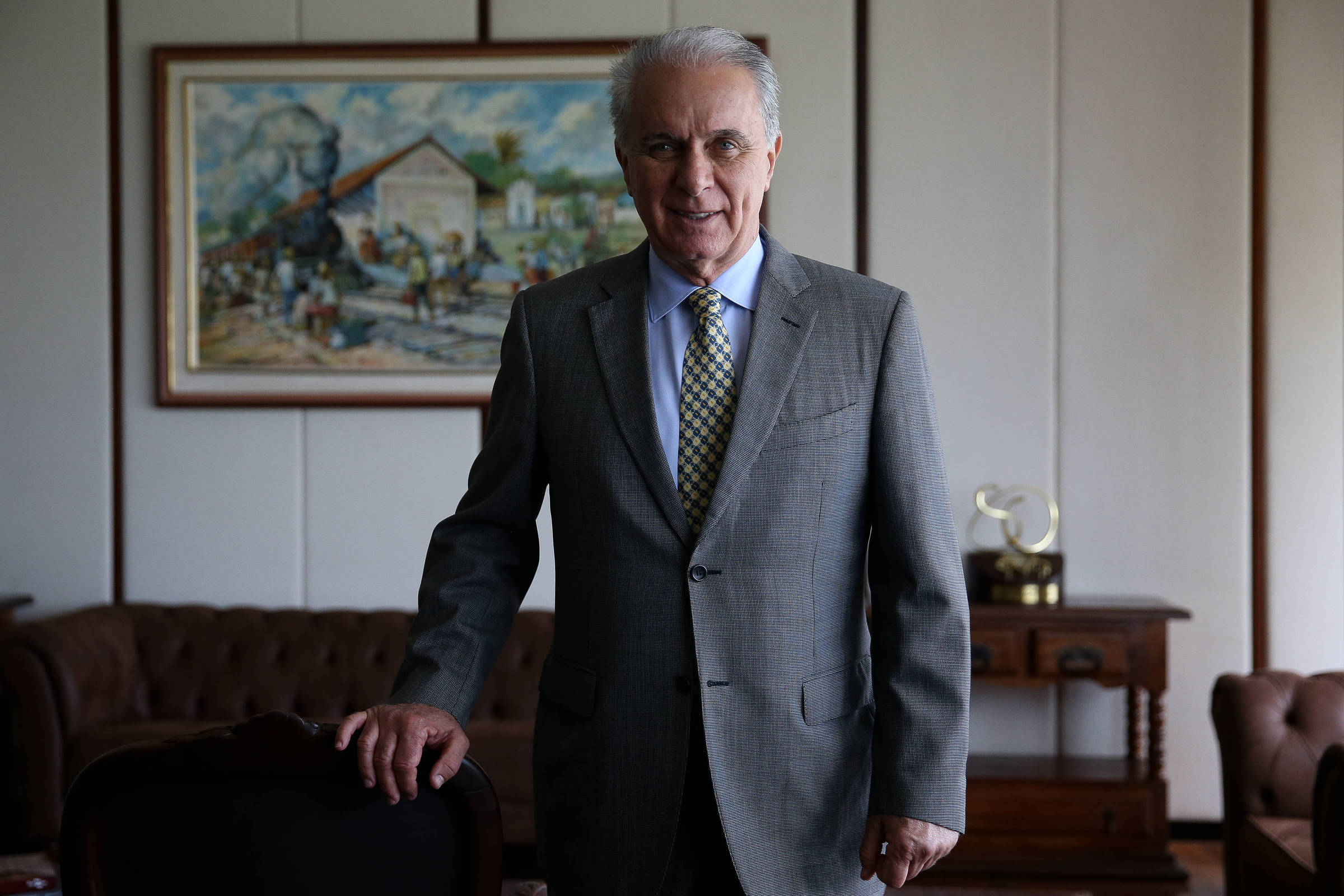 The Minister of Agriculture under the Jair Bolsonaro (PL) administration, Marcos Montes (PSD-MG), claims that the government of President-elect Luiz Inácio Lula da Silva (PT) “has everything to work out”, and that the names aired to replace it in the folder from next year are “excellent.”

“The names that are there are names that I applaud. I will not mention any because there have already been about five. What I suggest is that the president who will take over gives the same attention to the ministry that President Bolsonaro gave”, he says in an interview with Sheet🇧🇷

Marcos Montes claims that, in addition to choosing a minister who knows the sector and has the support of the ruralist caucus, Lula must avoid the war between agriculture and the environment, in addition to not bowing down to countries that “scream out there”, but “don’t do absolutely nothing.”

The former number two of then Minister Tereza Cristina (PP-MS) also condemns the road blockade and says he sees no evidence of participation by agro companies in financing anti-democratic protests —although investigations point to the opposite.

What assessment do you make of the Ministry of Agriculture in the government of Jair Bolsonaro? We have to do a retrospective of the beginning, when the president looks for the Parliamentary Front [da Agropecuária] and asks for the nomination of a minister. It was already a great gesture for the sector.

Another important point was that, out of 50 positions, there were two political nominations, Jorge Seiff for the [Secretaria da] Fishing and Nabhan’s [Garcia, para a Secretaria de Assuntos Fundiários]🇧🇷 In the context of family farming, the resources of the Safra Plan were greater and the interest rates lower compared to the past. Almost 500,000 settled families were granted title. We have opened more than 230 markets. Apart from the crises we faced: pandemic, war, the fertilizer business, we did a great job.

What do you expect from the ministry in the Lula government? I don’t know who will be nominated here [para ministro]🇧🇷 I say this: the names that are there are names that I applaud. They are excellent names. I won’t mention any because there have already been about five. I don’t know who it will be, but they are all very good.

What I suggest is that the president who will take office gives the same attention to the ministry that President Bolsonaro gave. If he does that, with capable people —and I am sure that a capable person will come here—, I think he will be able to work together with the Parliamentary Front for Agriculture, with the CNA [Confederação da Agricultura e Pecuária do Brasil] and the OCB [Organização das Cooperativas Brasileiras]🇧🇷

Former minister Neri Geller said that agro resistance to Lula is already diminishing. I think Neri is right, the resistance has to decrease, but it will only decrease with gestures. If what was done in the past is maintained, the sector will get goosebumps. Especially with this issue of legal uncertainty, land invasion.

Now, this speech cannot be blaming the rural producer for the environmental slips that still exist. In the past, it was a deadly war between the environmental issue and production. Production can coexist perfectly with the issue of sustainability, and the world needs it. So I think it has everything to work out if he [Lula] have these positions.

But do you agree that resistance in agriculture is decreasing? Resistance exists, you can’t deny it. And it breaks with acts of trust. The president will have to give signs. I am hopeful that agro can have that level of confidence in him as he had with the president [Bolsonaro]🇧🇷 But it is necessary to attend and value the sector. You can’t value just a little piece. The very family agriculture that they had as their flag was never valued. It was valued now that it has the Safra Plan, it has resources, it has title.

I won’t call it resistance, I’ll call it fear. The world works against us in some sectors because we are competitive. They use sustainability, the environmental issue, to take away our strength. He cannot get into this area that France does, that mainly the European Union does. He has to understand that first he has to protect and honor our sector, not those who scream outside about the environmental issue. They do nothing, absolutely nothing. They neither pay Brazil nor do it on their land. They are afraid of Brazil being competitive. And here we do our homework. Brazil has advanced a lot in these things, but it still has a way to go due to the potential that we have.

What was seen in the Bolsonaro government was the weakening of the Ministry of the Environment. I think we had to be more severe with environmental irregularities. I had to punish because many times it is the logger who is doing this, not the cattle rancher. Mining, wood, agro people who are doing it wrong have to be punished too.

Now, it’s not punishing for anything. It’s not about going there, looking, and setting the tractor on fire just for nothing. The issue of illegal deforestation, for example, has to reach zero. And not accept the discourse of countries that criticize Brazil and do absolutely nothing. We have to be much more partners in our production. Demanding abroad and not bowing to the opinions of countries that, I repeat, are not thinking only about the environmental issue — they are also thinking about Brazil’s competitiveness. Penalties, inspections existed, but the discourse was not compatible with what was being done.

Officials from Ibama and ICMBio denounced the weakening of inspections, former minister Ricardo Salles defended passing the cattle. That was unfortunate, a very bad term. I don’t want to defend him, but the term was not good. A term like that is not correct, but it was not with bad intent. What he could be saying is that he has a lot to approve.

Regarding the employees, I see the following: they were overvalued, their functions were oversized. It suddenly took some of the power away from these officials. They didn’t want to know about Brazilian production. They would go there and put the iron, excuse the expression.

I am a witness to many cases. The Ministers of the Environment I met, almost all of whom passed through [governos petistas] sometimes they had positions that were much more ideological than this joint action with production. The whole world is coming here to say: ‘produce, produce, we need to have food security’. Now, we need to produce sustainably. I disagree politically with the president-elect, I’m on the opposite side, I’ve been my whole life. But, with my experience, I have to give people credit.

What explains the sector’s support for the president? Is there an ideological question behind it, like the armaments issue? The armaments issue for the sector is so small, so irrelevant. The people who are passionate about this represent so few people in the industry. and defend [isso] because they went through personal problems. But this is not the industry’s main agenda.

Now, I think it’s absolutely right to have a gun on the farm. You are isolated, the guy goes in there, you have to scare the guy. But that is not the sector’s problem.

The support is what the agro has gone through in these four years. And legal certainty. What’s most on the producer’s mind is the issue of land invasion. That is really worrying. The MST [Movimento dos Trabalhadores Sem Terra] participating in the transition is a shot in the heart of the producer.

The information sent to the STF indicates the participation of companies in the sector in the protests in front of barracks and in the blockade of roads. How do you see this? I think [Ministérios Públicos e polícias] they are wrong. There may be rural producers helping the protesters, but not companies. It is impossible for you to agree to block roads.

Now, if the guy is there doing a peaceful demonstration and the person goes there and wants to help, says he’s going to have a barbecue, I don’t see anything wrong. ‘Oh, they are encouraging the military coup.’ How encouraging? Will the Army be induced to step out of line because of popular pressure? If so, we’re screwed. The Army cannot be subordinated to popular pressure.

The agro is participating, but not with companies. You are participating individually. Let’s assume that people are going to demonstrate near my farm. I can say: ‘I’m going to kill an ox and make a barbecue for these people’. I don’t do it, because I’m not going to give anyone an ox [risos]🇧🇷

In the Ministry of Agriculture since the beginning of Jair Bolsonaro’s government as Tereza Cristina’s number two, he took charge of the folder in March of this year. Federal deputy between 2007 and 2019, he chaired the Agriculture Commission and the FPA (Agricultural Parliamentary Front). Anesthesiologist and rural producer, he was mayor of Uberaba (MG) for two terms.

Facebook
Twitter
Pinterest
WhatsApp
Previous article
Can Argentina be eliminated from the Cup in the 2nd round? see scenarios
Next article
Barcelona coach says he presented project to Endrick