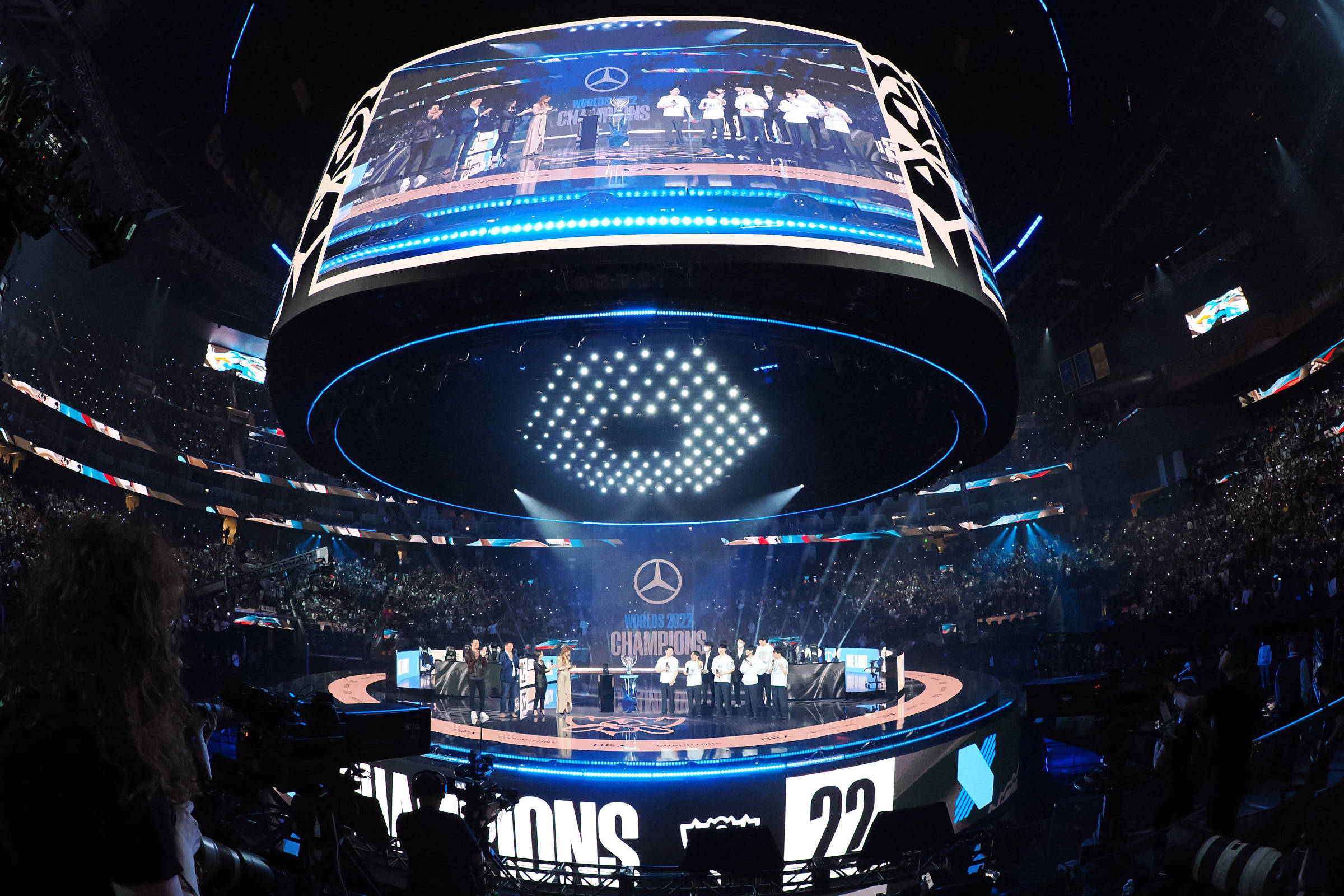 The tense and close matches had already lasted more than three hours – as shown by the huge screen at the Chase Center in San Francisco – when the crowded audience of spectators, who brandished inflatable batons and enthusiastically shouted, seemed to feel that victory was close at hand.

A South Korean esports team, DRX, led their video game characters into the opponent’s base, the T1 team, and shattered the opponent’s Nexus, a blue gemstone, winning this year’s League of Legends world title. .

Fans cheered with jubilant roars, fireworks went off, winners hugged each other and losers shed tears over their keyboards. Executives from Riot Games, the maker of League of Legends, presented members of the DRX team with Mercedes-sponsored diamond rings to celebrate the athletes’ arrival at the top of the gaming pyramid.

The event was carefully choreographed, and it was the kind of spectacle video game companies promised investors in traditional sports when they first tried to lure their money into this fast-growing sports sector in the mid-2010s.

“I remember seeing a team leaving, and fans going wild, asking for autographs. I thought to myself that this was very similar to our experience,” said Zach Leonsis, son of Ted Leonsis, owner of the Washington Wizards, the NBA, and the Washington Capitals of the NHL. Leonsis Jr. decided to invest in an esports team in 2016.

Most of those who have invested have yet to make a profit or see returns on their investments, and the video game companies that run North America’s biggest competitive leagues, like Riot and Activision Blizzard, are operating those leagues at a loss or just now exiting. from red.

While major esports events fill arenas like the Chase Center and draw tens of millions of spectators in China, tickets cost less than traditional sports games, and the number of Americans watching esports is much lower than 124 million viewers who watched the NBA Finals in 2022 or the average of 17 million viewers that NFL regular season games recorded in 2021, a difference that means less interest from advertisers.

Crucially, leagues like the NBA and NFL make billions of dollars a year from their television broadcast contracts, while many esports tournaments are streamed for free on sites like YouTube and Twitch. Some initial revenue projections overestimated the value of selling streaming rights to Twitch and YouTube, and these contracts turned out to be less profitable and less frequent than expected.

Naturally, investors in esports did not expect the segment to supplant traditional sports in just a few years. But even so, some of them were still disappointed with the first returns obtained.

“We were told the growth of these leagues would be meteoric, and we all believed those estimates,” said Ben Spoont, chief executive of a sports organization called Misfits Gaming, which counts among its investors the owners of the NBA’s Orlando Magic and of the NFL’s Cleveland Browns. “What happened is that growth didn’t materialize as quickly as we had hoped.”

There are other challenges. Most League of Legends competitions in North America take place at the Riot arena in Los Angeles, where many teams are based. This deprives sports teams of an opportunity to earn money by hosting games or building a following in a specific region.

Activision planned to change this situation by creating leagues based on the combat games “Overwatch” and “Call of Duty”. The two leagues would have teams playing at home and away, and would involve teams from all over the world, in a system similar to that of traditional sports. Activision has put Overwatch league quotas up for sale for $20 million.

But the league was just starting to gain momentum when the Covid-19 pandemic forced the cancellation of in-person events. Since then, it has been struggling to gain momentum. Activision has allowed teams to defer paying their league participation fees and is now helping them cover their costs by contributing around $1 million (R$5.3 million) to each team’s league budget. this year, according to a person familiar with the league’s finances.

“Even with the calibration that had to be changed due to the pandemic, we filled arenas and registered record audiences”, said Joe Christinat, spokesman for Activision, adding that there was “overwhelming enthusiasm” for the new games of “Overwatch” and “Call of Duty”. “Our fans want these leagues, and we remain committed to them.”

Investors have also noticed that video game makers’ incentives don’t necessarily align with theirs. Publishers can afford to operate loss-making sports leagues as long as those leagues spark interest in their profitable video games, and so they sometimes prioritize growth over revenue. Riot, for example, might be hesitant to sign an exclusive deal to stream League of Legends on YouTube or Twitch because that would prevent viewers in China, where both services are blocked, from watching.

This conflict of objectives sometimes results in tense negotiations.

Video game executives ask for patience. It is said that esports, popular for decades in Asia, is still nascent in North America and should be considered more of a high-growth startup than a fully mature business. US viewers watched 217 million hours of esports content this year, according to an estimate by data firm Stream Hatchet, up from 147 million hours in 2018. we were still in the era of NFL leather helmets,” said Naz Aletaha, President, Worldwide Esports, League of Legends.

Many investors in this segment still believe that esports will eventually become a dominant and profitable sector. But in the short term, some of them feel “very frustrated,” said John Needham, president of esports at Riot, adding that his company has worked to convince investors to adopt a different monetization model.

While sponsorships still account for the majority of revenue, one of the cornerstones of Riot’s strategy is microtransactions: selling League of Legends recreational items to player avatars, themed around real-world sporting events like the League of Legends world championship.

This appears to be a narrow source of revenue, but the first numbers have been very positive. When Riot hosted the 2022 championship for Valorant, another esport, it made around $40 million (R$211.7 million) from microtransactions alone. Half of the total went to championship teams through a revenue sharing agreement.

“This is where we’re going to mess up the traditional broadcast television revenue formula, because we can gain scale,” Needham said.

For now, the costly process of building competitive esports teams simply serves as a catalyst for actual revenue-generating operations in many esports organizations. Prominent teams like FaZe Clan and 100 Thieves have morphed into broader lifestyle brands offering viewers “livestream” clothing and entertainment. FaZe Clan, which went public this year in what was seen as a milestone for the industry, is losing money and cutting costs as its share price plummets.

Felix LaHaye, chief executive of United Esports, a gaming marketing agency, compared competitive esports matches to a car company maintaining a Formula 1 team — an expensive project, but one that attracts attention and prestige.

“The team creates value elsewhere in the company’s ecosystem,” said LaHaye. “It’s worth taking a loss from a product that creates a brand, and later allows normal products to be sold to people.”

Even Team Liquid, regarded as one of the most competitively focused esports organizations, derives much of its revenue from other sources, and now has nine separate sources of revenue, including an esports encyclopedia website. , said Mark Vela, chief executive of Axiomatic Gaming, which owns Team Liquid.

“It’s a natural evolution,” Vela said. “Everyone is having to step back and figure out what really works for us in the current situation.”

Team Liquid, which posted more than $38 million in revenue last year, is still not profitable, but Vela, whose ownership group includes the Leonsis family, said esports continued to be profitable. seductive because of the rare type of spectator they attract: young and well-heeled.

Spoont is also optimistic about the long term, but he is not willing to wait. In July, he sold his European League of Legends team to a Spanish esports group for an estimated $35 million. He said he was refocusing Misfits to focus on content creation, in part because it could take a decade for competitive esports to reach its potential.

“We’re trying to accomplish, as an industry, what it took the NBA 50 years to accomplish, but we want to do it in a five-year period,” he said, referring to the many NBA teams that didn’t immediately become profitable businesses. “Unfortunately, things like that don’t happen.”