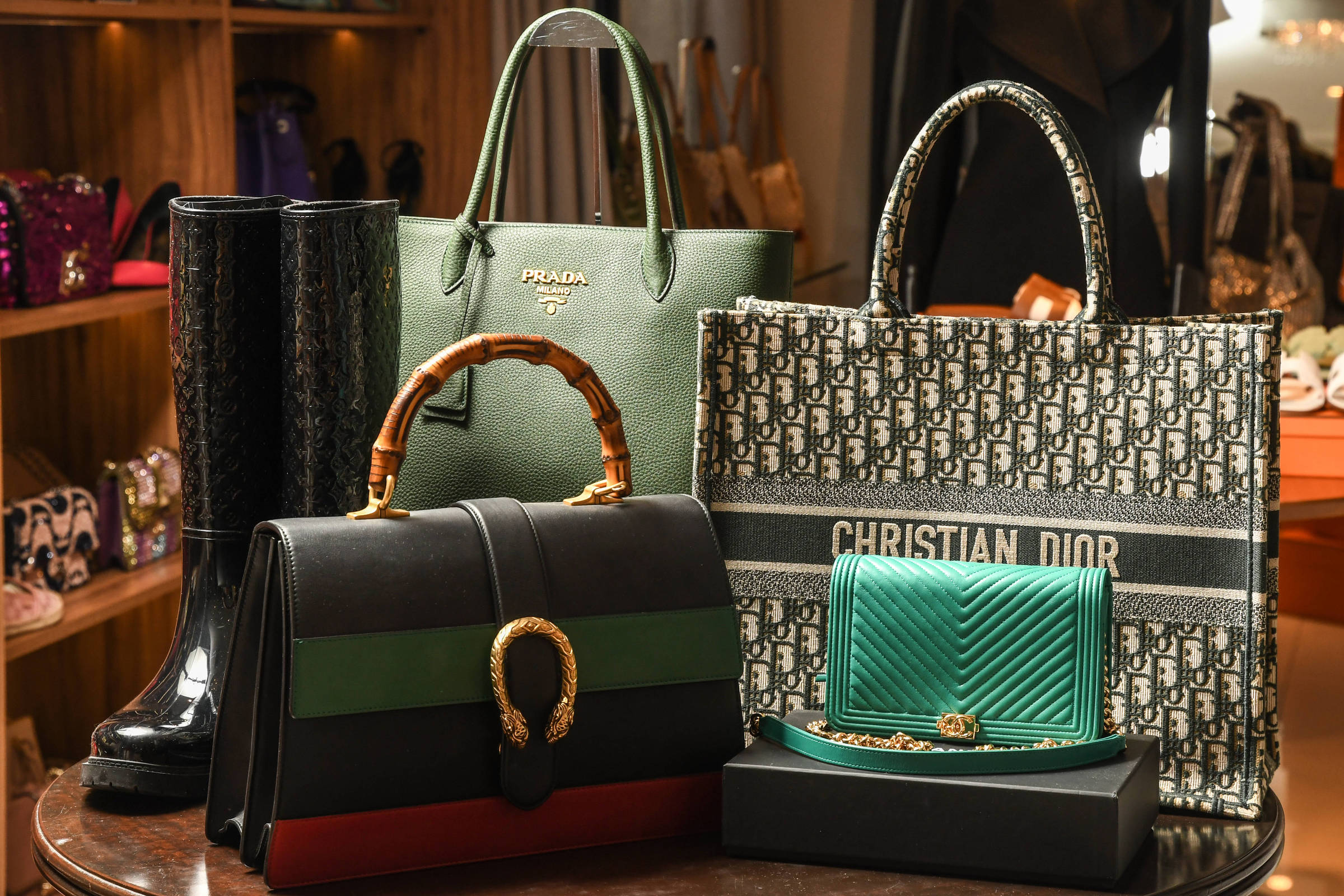 Understand luxury thrift stores, where a used bag can be more expensive than a new one

Luxury and crisis are two words that do not fit in the same sentence. In 2022, the war in Ukraine generated negative impacts on several production chains around the world, especially in food and energy, which contributed to the rise in inflation at the global level. In addition, the persistence of Covid-19 continued to paralyze part of activities in China and the forecast is that the global GDP (Gross Domestic Product) will grow 3.2% this year, according to the IMF (International Monetary Fund).

But the luxury market should see an increase of between 19% and 21% in the sale of watches, jewelry, handbags, cars, wines, yachts, arts, hotel accommodation, gastronomic and tourism experiences, capable of reaching the impressive figure of 1 38 trillion euros (R$ 7.6 trillion) around the world, according to a study by Bain & Company and the Altagamma foundation (an Italian luxury brands committee).

For luxury to remain luxury, it needs to be accompanied by scarcity. The more exclusive, the more expensive. Although they leave a part of the clothing collection to the outlets, the biggest names in the luxury market are not going to sell off exclusive handbags, watches, perfumes and coats that have not been bought: this would irremediably affect the ‘inaccessible’ aura of the brands.

The path was literally to burn stock: according to estimates by the French government released in 2020, more than 650 million euros (R$ 357 million) in new consumer products are destroyed or thrown away every year in France. In 2018, the Burberry brand was involved in a scandal, when it was discovered that more than R$ 140 million in stock was incinerated.

To combat the issue, on January 1 of this year, an anti-waste law came into effect in France, which prevents unsold products from being destroyed. The initiative gave new impetus to the promising market for second-hand luxury products (second-hand, in English), a kind of luxury thrift store, in which billionaires or millionaires discard what they no longer want for less well-off rich people.

But that’s not all: the luxury brands themselves have been investing in the second-hand market, buying specialized sites or establishing partnerships. According to sources in the fashion market, it is a camouflaged way for them to get rid of stranded products, by simply removing the label as a new item.

At the same time, the second-hand market is the perfect alternative for brands to achieve their ESG goals (which defines better environmental, social and governance practices), betting on the circularity of the pieces. Most clothes are made of polyester, a material that takes 200 years to decompose and releases plastic microparticles when washed. On top of that, they meet the desires of the new generations of well-heeled consumers, concerned about the future of the planet.

According to a study carried out by consultancy GlobalData, in 2022, the global second-hand fashion market should move US$ 119 billion (R$ 620 billion) this year, an increase of 24% over last year. The expectation is that in 2026 this business moves US$ 218 billion (R$ 1.13 trillion). Values ​​are boosted by the presence of luxury brands.

In December last year, Farfetch, the largest global platform in the luxury market, bought Luxclusif to also lead the sale of second-hand luxury goods. Also in 2021, Kering, owner of Bottega Veneta, Balenciaga, Alexander McQueen and other brands, became a partner of the French Vestiaire Collective, a luxury thrift store present in dozens of countries. In the same year, Gucci created the Gucci Vault, the brand’s website dedicated to vintage, offering “collectors’ items”, such as handbags from the 1950s, 1960s and 1970s.

According to Maya Mattiazzo, professor of the Fashion and Luxury postgraduate course at ESPM (Escola Superior de Propaganda e Marketing), what you see in the second-hand market is an inflation similar to that observed in car resale. “The used ones are getting more and more expensive, there is a disproportionate valuation”, she says.

Lawyer Michelle Marie Hirome Sacchi, 42, is one of the supporters of the second-hand market, which in Brazil is operated by sites such as Gringa, Tecla Única, Front Row and Peguei Bode.

She has just sold an Hermès Kelly bag that her ex-husband gave her ten years ago. At the time, it cost about R$ 17 thousand. “I resold it for R$50,000 for a second-hand and I know that the bag has already been sold for R$80,000”, says Michelle.

In Maya Mattiazo’s opinion, one of the explanations for the phenomenon of luxury thrift stores lies in the embarrassing effect that the big brands cause in simple mortals. “There are people ashamed to enter a luxury store, people who have money, but do not feel like they belong in this environment, especially in the interior of the country”, says the specialist.

“High luxury brands, like Hermès, understand that the customer needs the brand more than they need the customer”, says Maya. In these cases, it is common for stores to select who they want to see bearing the brand in more exclusive items, such as handbags and watches, for which there is a queue.

In this case, she says, it is much easier for those who have money to simply order their favorite piece over the internet, with all the photos and videos that guarantee the origin of the product.

The problem is that the digital luxury second-hand market has to deal with counterfeits, many of them perfect, of luxury goods. That’s what happened to business administrator Lilian Marques Peixoto, 33. “A few years ago, together with my brother, I bought a used Chanel bag as a gift for my mother. I saw the photos on Instagram of the thrift shop. R$ 15,000 at the time. When the piece arrived, it wasn’t the same as the photos”, he says.

The experience encouraged her to create a second-hand business with verification of the origin of the products. This is how Front Row was born, which operates online and has a physical store in São Paulo, in Itaim Bibi. Times need to be scheduled in advance and only three consumers are served simultaneously. On the shelves, items such as Rolex watches from R$ 39,000 to R$ 200,000, or Hermès bags from R$ 22,000 to R$ 350,000.

“Since Black Friday, we’ve been selling one Hermès a day,” says Lilian, who has 1,900 registered customers, both in Brazil and abroad, from places like London, Miami and Portugal. The average ticket, which was BRL 1,500 when the store was created, is now BRL 18,000. The store divides the payment into up to ten interest-free installments.

Most of the pieces are on consignment – ​​either with individuals or with other registered thrift stores. Front Row takes the commission on the sale.

“There is a great demand for new parts, in the box”, he says. “People want to buy exclusive things, but in an environment where they feel welcome. Many luxury brand stores adopt a snobbish posture, an air of superiority, which bothers part of consumers.”

At Hermès, for example, one of the highest luxury brands in the world, there is a score for each customer. People buy designer handbags, and end up receiving recommendations to buy other items – clothes, shoes, home accessories. The more they buy, the higher the score.

Some consumers buy the product, even without wanting it, just to have a higher score that favors them when it comes to “being chosen” to purchase a more exclusive item. Then they try to get rid of these other items in luxury thrift stores.

But the great differential of Front Row’s business, says Lilian, is in guaranteeing the origin of the pieces. “There are gangs in China, Turkey and Europe that specialize in counterfeiting watches and handbags,” she says. “The core of our business is authenticity.”

Front Row has an exclusive professional to check the authenticity of the pieces, specific software and even a kind of scanner that validates the original pieces. Any product only enters the Front Row mix if it passes this scrutiny.

For Luciana Batista, partner at Bain & Company, the global leader in retail ESG consulting, there are three factors sustaining the growth of the second-hand market in the world: concern for sustainability, the expansion of online retail and the desire to be authentic.

“Customers who buy a second-hand product want to create unique looks, combine pieces and styles in their own way,” he says. “It’s exclusivity no longer for the value of the piece, but for the authentic look, a concern mainly for younger consumers.”

Luciana agrees that, in this movement, guaranteeing the origin of the pieces becomes a priority. Even for the brands themselves, who are not interested in seeing a sea of ​​fake products stamping their name.

In April 2021, international luxury industry leaders such as LVMH, Prada, Cartier and Mercedes-Benz created the Aura Blockchain consortium to help track products. Through the decentralized data storage system, it is possible to track the origin and destination of items. At the end of last year, Bain, through its division specialized in the luxury market, started to support the consortium.

“It is also a way for the brands to understand the behavior of consumers, from the point of view of the pieces”, says Luciana.