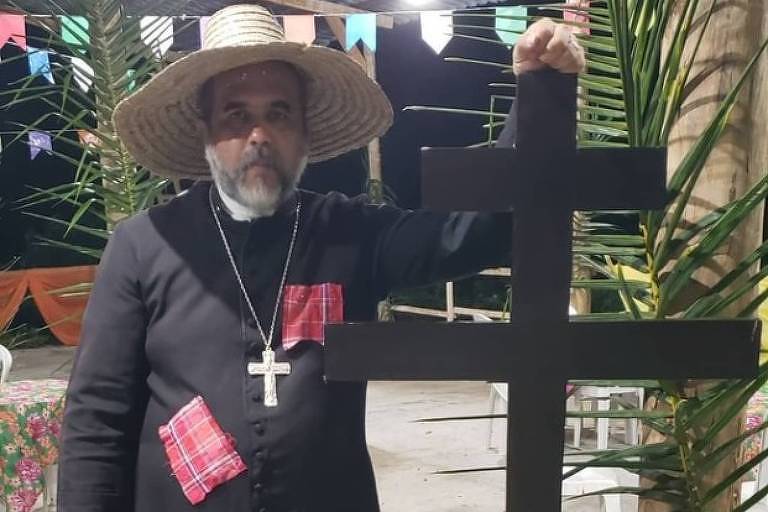 Appointed as a ‘festival priest’, Kelmon goes viral with a character photo

In this Thursday night’s debate (29), on Globo, the PTB candidate for the presidency of the Republic, Padre Kelmon, was called “the priest of the June festival” by the candidate Soraya Thronicke (União Brasil) during a clash between them. And that rocked the internet.

However, this Friday morning (30), Soraya herself published a photo of the priest dressed in character. The image is real and can be found on his social media. Kelmon appears with June patches on his cassock in an environment all decorated for the June festival. And he even invited people to join in the celebration: “You’re just missing here.”

“I didn’t lie,” Soraya wrote in the post with a photo of the priest also wearing a straw hat. Quickly, more memes were created. After the debate, Kelmon became a joke on the networks between anonymous people and celebrities who watched the Globo Debate.

Celebrities compared Kelmon to Father Adelir de Carli who died after flying attached to a thousand colored balloons in April 2008. “Socoooooorro, the priest is back!!! The balloon is rising, the drizzle is falling!”, tweeted actress Heloisa Périssé. “And we thought that the dumbest priest in Brazil had flown with balloons. In fact, he was the greatest Brazilian of all time: it leaked!”, commented comedian Paulo Vieira on Twitter.

Comedian Marcelo Adnet wrote on the networks that President Jair Bolsonaro (PL) avoids a clash with former President Luiz Inácio Lula da Silva, chooses D’Ávila and sends the priest to the slaughter. “Kelmon dick effect can turn against Jair”, he wrote in the networks. “Padre de festa junina”, he added.

Facebook
Twitter
Pinterest
WhatsApp
Previous article
Three rules that every fashion expert follows
Next article
Hurricane Ian: 21 dead in Florida – With a speed of 136 km/h, it is heading towards South Carolina