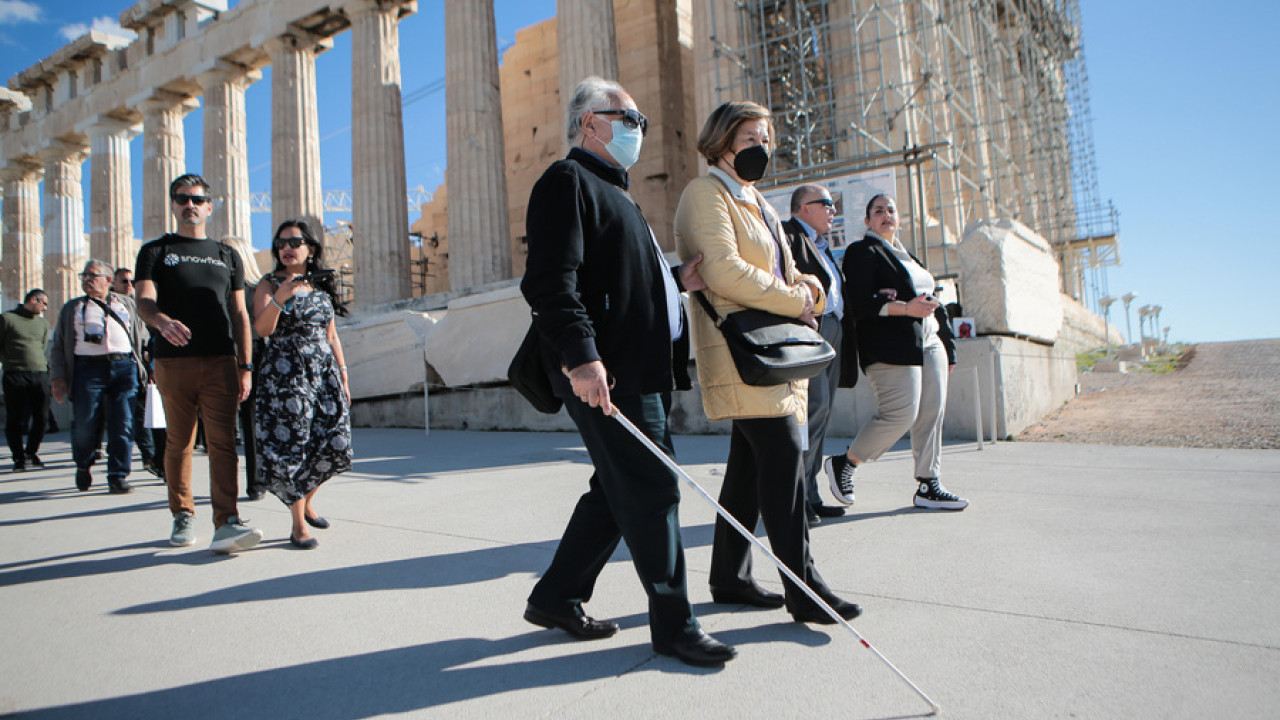 The Acropolis is now accessible to visually impaired people

As stated by the Minister of Culture and Sports, Lina Mendoni, “today is a special day, a day of joy for the Ministry of Culture, but also for the government.”

Accessible to visually impaired people now the Acropolis of Athens, with an overall program that includes a tactile route, special printed and specially designed aids and was implemented by the Ministry of Culture and Sports and the Ephorate of Antiquities of the City of Athens, in collaboration with the Lighthouse of the Blind of Greece and with the support and sponsorship of the Onassis Foundation. The route was inaugurated today by the Minister of Culture and Sports Lina Mendoni, in the presence of the president of the Onassis Antonis Foundation S. Papadimitriou and the president of the Board of Directors. of the Lighthouse of the Blind of Greece Maria Tzevelekou.

As stated by the Minister of Culture and Sports, Lina Mendoni “Today is a special day, a day of joy for the Ministry of Culture, but also for the government. Since July 2019, Prime Minister Kyriakos Mitsotakis has made universal accessibility for the disabled a priority. Obviously, equal access to cultural goods is a goal, a purpose, a bet for the YPPOA and its services. We started in July 2019 to make the accessibility of the Acropolis archaeological site a reality for the disabled and disabled. With the cooperation and partnership of the Onassis Foundation, which I thank in the person of its president for the cooperation and for the generosity with which it covers our initiatives in the Acropolis, the slope lift was built, which serves hundreds of visitors, Greeks and foreigners, daily and the new routes, which allow the movement of wheelchairs and unhindered walking for those with any form of mobility disability and generally for disabled people. But it is not only the Acropolis. In the three and a half years that have passed, we have taken many initiatives and our archaeological sites, with priority always being the sites included in the UNESCO World Heritage List, are gradually becoming accessible to as many groups of our fellow citizens as possible. We have an excellent cooperation with ESAMeA, with the Blind Lighthouse and with the other organizations of our fellow citizens, who have visual impairment problems. Continuing this work, we are today launching a pilot program at the Acropolis for the visually impaired.

The fact that today the Acropolis is still accessible by a group of our fellow citizens is for us a huge satisfaction and a very great joy. In the person of the head of the Ephorate of Antiquities of the City of Athens, I thank all the staff for the sensitivity and responsibility with which they deal with accessibility issues without any deviation from the current institutional framework”.

The president of the Onassis Foundation, Antonis S. Papadimitriou, made the following statement: “The new initiative of the Onassis Foundation ‘Accessibility of the visually impaired’ comes as a natural continuation and complement of the interventions that preceded it in the last two years: The lighting of the Acropolis with the innovative design of Eleftheria Deco, which was awarded internationally . The new routes for People with Special Needs and the slope lift that made the Sacred Rock accessible to all. The new symbolism, which we are now strengthening with the action for the accessibility of people with visual disabilities, does not concern only Greece. It also applies to foreign visitors, as the capital writing is translated into six languages. For the Onassis Foundation, access to culture, health and education is of the utmost importance and underlines that for us the measure of all things is man.”

The president of the Board of Directors of the Blind Lighthouse of Greece, Maria Tzevelekou, said: “One of the jewels of the world’s cultural heritage is finally universally accessible. It is a huge step for a truly inclusive society, where disability will not create stereotypes but channels of cooperation and meaningful communication. This modern project is the effort and result of people who had faith and worked hard so that today we can tour the Holy Rock of the Acropolis independently, with dignity, to admire the masterpieces of our ancient Greek heritage. I hope that this project is the starting point for a series of such actions and that every archaeological site becomes accessible, that we also have the possibility of equal access for our cultural heritage. I thank from the bottom of my heart the Ministry of Culture, the Ephorate of Antiquities of the City of Athens, the Onassis Foundation and of course the Lighthouse of the Blind of Greece who with love, zeal and respect all worked together for this innovative project, which I consider to be the ultimate expression of empathy”.

The tactile route provides for:

Finally, special training was carried out for prison staff to acquire special knowledge and familiarize themselves with techniques-tools for the management of visually impaired visitors.