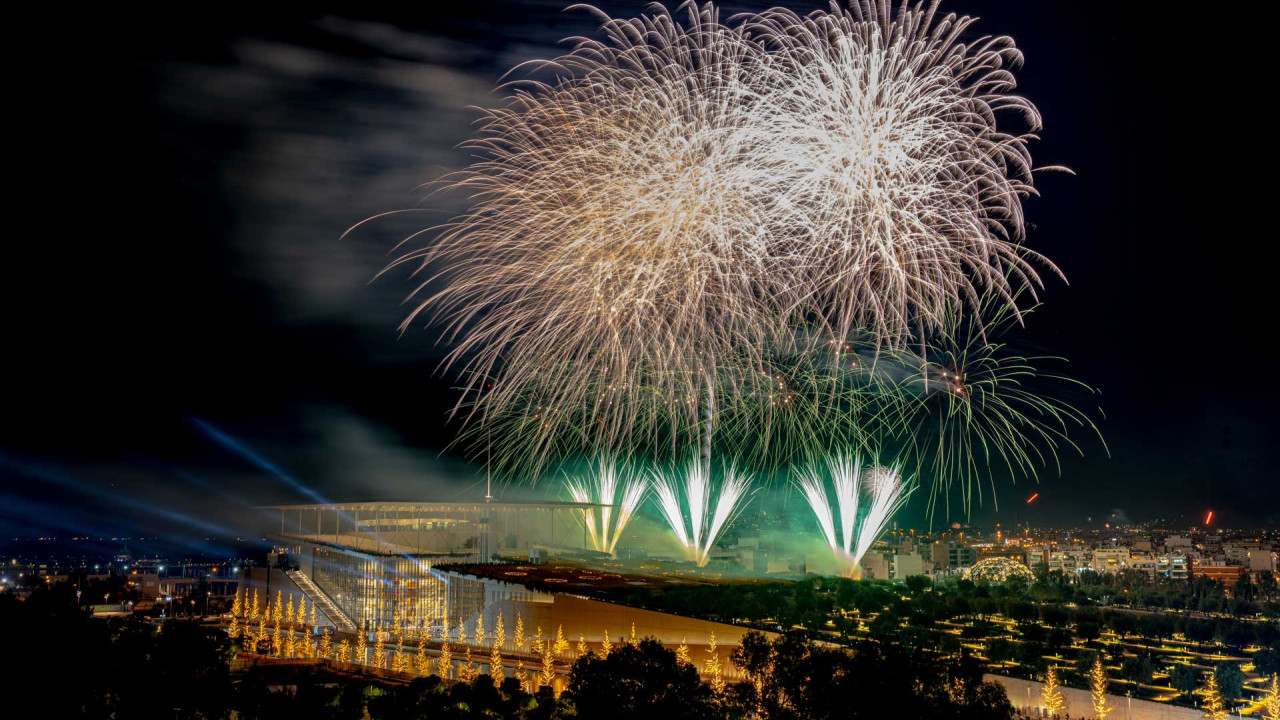 The hostess of the glamorous celebration is the actress Nadia Kontogeorgi.

As every year, the Stavros Niarchos Foundation Cultural Center (SNFCC) wears its festive clothes and welcomes the public for the change of time.

The New Year’s Eve program opens at 22.30 Jerome Kaluta and his Big Band with a unique concert with soul and funk hits.

Time changes with a spectacular fireworks show that will light up the Attic sky, while, in the first minutes of the new year, the starting signal is given for the first race of the year, the now established “SNF RUN: 2023 FIRST RUN” of the Stavros Niarchos Foundation (SNF). Afterwards, a big party is set up in the Agora with the Italian DJ Beppe Loda.

The impressive choreography of the Fountains in the Canal could not be missing from the program.

The hostess of the glamorous celebration is the actress Nadia Kontogeorgi.

At the same time, the Ice Rink and Stavros Niarchos Park remain open, only for this evening, until 02.00 in the morning for those who want to welcome the new year by making figures on the ice or playing with the impressive Lighting Installations. Balloons for the children, treats and many more surprises complete the New Year’s Eve scene at the SNFCC.

The festive program of the SNFCC will be broadcast live on ERT2 and on the snfcc.org website.

All New Year’s Eve events are held with free admission thanks to the exclusive donation of the Stavros Niarchos Foundation (SNF).

The New Year’s Eve program at the SNFCC is as follows:

Just before the turn of time, the explosive Jerome Kaluta takes the stage at the Agora with his 10-piece Big Band for a concert of the greatest soul and funk hits that bring the Motown era into today. All time classic hits by James Brown, Stevie Wonder, Marvin Gaye, Ray Charles, Manu Dubango, Curtis Mayfield, Aretha Franklin, Blues Brothers and many more legendary artists invite us to dance on the best night of the year.

With the arrival of 2023, Agora welcomes the legendary Beppe Loda in a surprise DJ set with disco as its main component. A pioneer of the Afro movement in the mid-80s in Northern Italy and the main DJ of the now legendary club Typhoon, Beppe Loda is considered by many to be one of the most influential and eclectic DJs of the last 30 years. He experimented by seamlessly mixing various genres of music that had never been heard before on the dancefloor worldwide – such as funky, afro, kraut, weird electronics, post wave, Brazilian music and obscure disco – thus creating a hybrid that later prevailed as cosmic. His presence is constant in the best clubs and festivals around the world and his DJ sets at MOMA’s PS1 are described by many as simply “mythical”.

The first race of the year starts at 00:04, just after the time change and the spectacular fireworks show and covers a 3km course. This year’s race has a special significance, as 2023 marks the 150th anniversary of the birth of Spyros Louis, the First Marathon Runner, at the first Modern Olympic Games in 1896 in Athens. To mark this anniversary, commemorative cups will be awarded to the first and first finishers.

The race has a charitable character again this year.

With the amount of money that will be collected from the symbolic participation cost (minimum subscription 5 euros), two non-profit organizations that dedicate their work to children will be supported: Karkinaki and SVOURENIO KDAPAmeA of the Municipality of Kos.

Like every New Year’s Eve, the SNFCC Christmas World reaches the height of its brilliance with a spectacular display of fireworks, but also with choreography from the Fountains on the Canal.

The Fountains also welcome the new year with bright choreographies and invite us to enjoy an unforgettable spectacle with favorite melodies.

More information can be found at snfcc.org/NYE and on the @SNFCC social media pages.