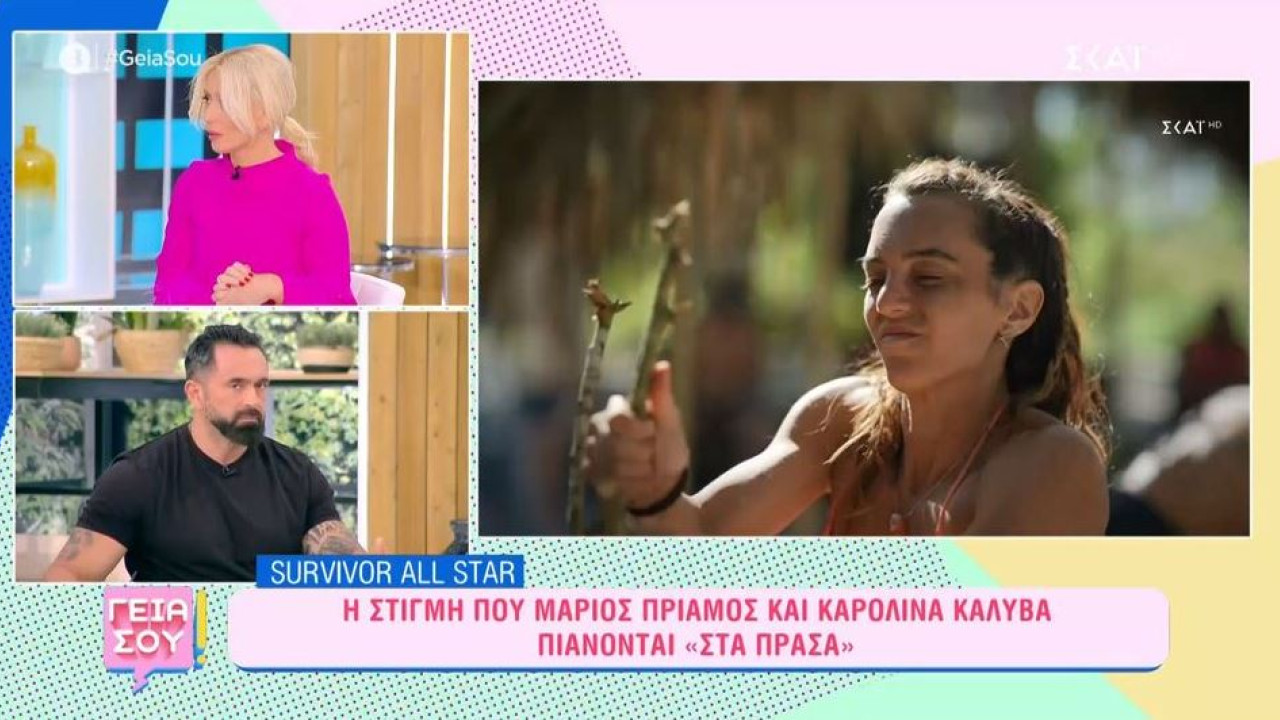 Bo on ‘Hello’: ‘was’ fits my relationship with Carolina better – Priam and Hutt meet secretly in the jungle! (video)

Guest on the show “Hello” and Maria Bakodimou was the famous singer Bowho found himself in the unpleasant position of commenting on all the latest developments in “Survivor All Star”.

Its new trailer “Survivor All Star”, on SKAI, shows his partner, Karolina Jacqueline Kalyvato have secret meetings with Mario Priamos Ioannidis in the jungle.

Specifically, the two players get lost in the jungle and meet in a hut located there. In fact, the comments of their teammates imply that they have become closer, despite the fact that Kalyva is in a relationship with Bo.

Maria Bakodimouafter first thanking him for not canceling his appearance on the show after the latest developments, as expected, the singer answered everything, without mincing his words.

“These things happen. They are just happening in front of all of Greece. It’s not nice, it’s ugly, it’s something that makes you sad, because it’s also very fast. Suddenly within 10 days everything changes. Where a week ago we made an effort to help our man, all of a sudden, you see this thing,” Bo said with disarming honesty.

He even explained that for him their relationship is now in the past. “It was” suits my relationship with Karolina better”, while for Marios Priamos Ioannidis, he said: “Our relationship was good. I believed that the reason he has is in and that what he says, he means it, as it happens between friends. Nor is Marios alone in life. They say it happened all the time, that they didn’t get caught once. I heard some things, but I was sure that they were talking, he was paying attention to her, what Marios had told me as a friend. The kid I delivered to Acun Media that day has nothing to do with what I see in the game. Carolina used to say that she is very much in love with me. I don’t think it’s a misunderstanding,” Bo said.

“I felt bad. I think it’s a big mistake to themselves first of all, because they didn’t respect people, their families, it’s not just me, but her family too. Her mother, her friends, her brothers. I spoke to everyone, they can’t believe it and are shocked. Her mother gets upset, it’s like she’s exposing herself. I didn’t regret supporting her. From my side, what I gave was very real and I did things that I don’t do in general”, he added.

He also revealed that he is not thinking about entering the game. “I don’t know how I will react when I see them. It seems they are lying, there is confusion. These things will only harm them. They are getting it very wrong. It is a pity”.

When asked if he would give Carolina a second chance, his answer is blunt: “I can’t, there’s no way.”

In the episode of Sunday, January 22, George Lianos seems to make a remark to Marios Priamos Ioannidis and Karolina Jacqueline Kalyvas. As seen in the trailer, the host will talk to the two players as they secretly meet in the jungle.

“Why do they disappear at a certain time when the sun goes down?”, asks Nikos Bartzis in turn. At the island council, George Lianos will reprimand the two players for their meetings. “As you well know, Survivor has some rules and they were specifically broken by two players,” the host appears to say.

“I don’t even consider it a violation, I didn’t leave to go to any village, any city, I didn’t get food, so…” Marios Priamos Ioannidis answers, with the presenter asking him the reason for his meeting. Then, Karolina Jacqueline Kaliva answers him: “We have a special sympathy with Mario.”

Facebook
Twitter
Pinterest
WhatsApp
Previous article
The facts about Larin-Kenziora in PAOK
Next article
Economou on Turkish provocations: Greece is not intimidated by anyone in any way