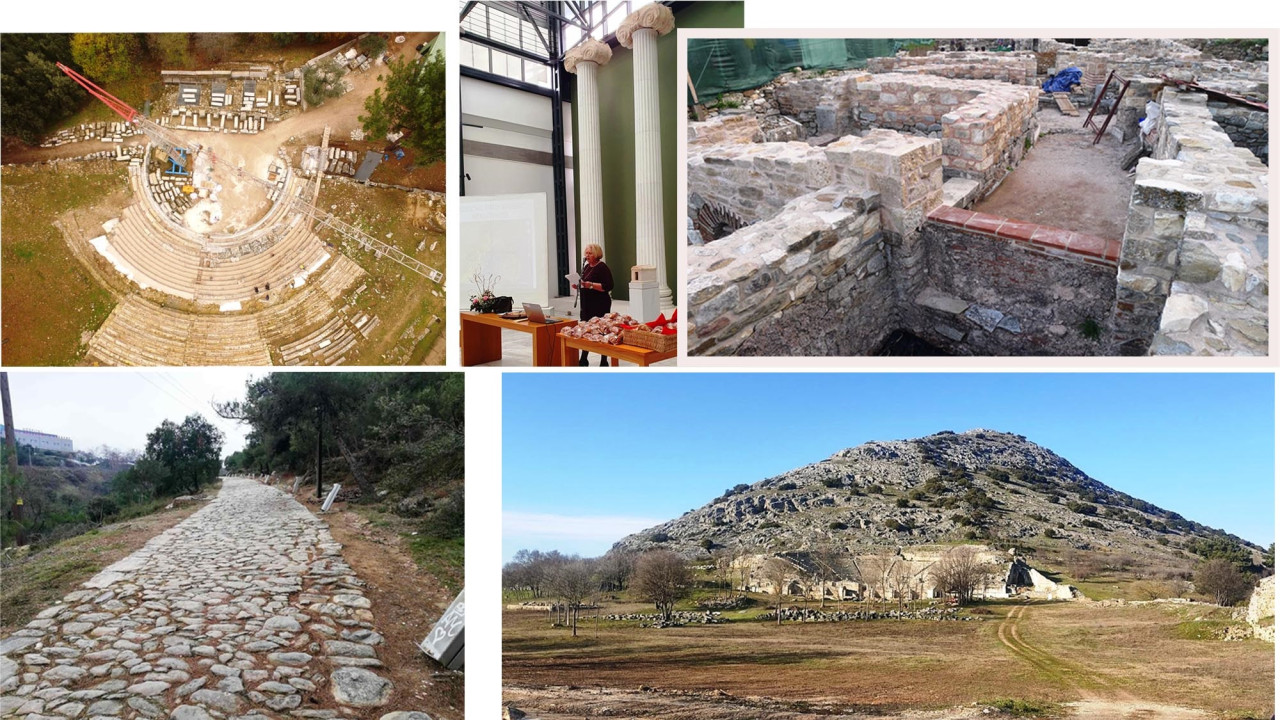 Kavala: The unification of the archaeological site of Philippi is progressing

The emblematic site of the Ephorate of Antiquities of Kavala – Thassos, this year will open for visitors, as the consolidation and enhancement projects carried out in recent years progress.

The Superintendent of Antiquities of Kavala – Thassos, Stavroula Dadaki, in her annual report during the event of cutting the New Year’s pie hosted in the imposing new wing of the archaeological museum of Kavala, referred extensively to the work carried out at the archaeological site.

Speaking to APE-MPE, he revealed that the work of consolidating and highlighting the ancient city of Philippi after the removal of the asphalt from the old Kavala-Drama highway (which passed through the archaeological site), significantly improved its image on many levels. “At the end of this year”, he noted, “the first section of the site consolidation work will be completed, while we are already preparing the studies for the second section that will be included in the new financing program”.

After removing the asphalt, the archaeological shovel brought to light an extensive complex of public buildings, which is an integral part of the ancient city. At the same time, thanks to the consolidation works, the existing routes have been improved and new ones created, while now the ancient theater is visible in its entirety both from the parking area and from most of the ancient market.

Mrs. Dadaki also underlines that the second section of works includes the creation of a new entrance to the archaeological site, as well as the highlighting of the early Christian Basilica I.

Restoration of the Second Basilica

At the same time as the unification, restoration projects of the early Christian Basilica II are being carried out by the Department of Restoration of the Ministry of Culture at the archaeological site. The ruins of the large and impressive temple, which is believed to have been built in 550 AD. but was destroyed before the interior work was completed as the dome collapsed, they have undergone a major restoration in an effort to preserve and preserve them.

In fact, what is being done is a restoration of the southern walls of the old temple, ensuring greater support for the remaining parts of the Basilica and at the same time offering the visitor a better picture of what the temple that dominated the most central point of the ancient city was really like.

In August, the ancient theater of Thassos reopens

The second big “bet” for the Ephorate of Antiquities of Kavala – Thassos this year is the reopening, after ten years, of the ancient theater of the island.

“The theater project was joined with a study approved under many conditions, the implementation of which had many difficulties”, noted the head of the Ephoria and continued: “The removal of the metal structure highlighted the serious mistakes of the past, which took us years to heal . The Ephoria completed a large number of studies in June 2022, which were approved by the KAS, without comments. Thanks to the scientific training, the methodical, industriousness and team spirit of the supervisor Constantina Panousis and her scientific team, we reached the point of seeing the achievement of the goal of restoring the theater with its marbles.”

Mrs. Dadaki’s intention, as she pointed out speaking to APE-MBE, is that in August 2023, the ancient theater of Thassos will open in order to host, under conditions, a performance of ancient drama or Attic comedy after the hollow has been restored and it will have clean up the orchestra, and the existing construction sites will not prevent a performance.”

It should be noted that the initial ambitious study envisages the restoration of the ancient theater and the lining of the hollow with the world-famous white marble quarried on the northeastern Aegean island.

The proto-Byzantine urban mansion of Thassos

Last year, the Ephorate of Antiquities of Kavala – Thassos had an active presence in a number of other projects, such as the highlighting of the part of ancient Egnatia and the restoration of the walls and buildings inside the so-called KREEH plot in the urban center of the city, which it is adjacent to the medieval aqueduct of Kavala (Kamares).

Also, under the supervision of Mrs. Dadaki, a systematic excavation was carried out in Thassos in the so-called proto-Byzantine urban mansion, an important secular (private) building, the only surviving visible one in Thassos. Thanks to the prize the excavation achieved in 2017, he proceeded to purchase a small section of the court and completed his excavation, revealing the courtyard peristyle. At the same time, he completed a cycle of maintenance in the excavated part of the house, which is of great interest and in which mosaic floors and samples of wall paintings were found, which prove that this is the mansion of a wealthy inhabitant of the island.

The work of extinguishing the fire of the archaeological site

The Ephorate had a contribution (in the part of preparing the studies) and in the large project of the construction of a fire extinguishing network of the archaeological site of Philippi, which will be financed by the Recovery Fund in an effort to protect and preserve the famous ancient city and the surrounding area.

Last year, two very interesting exhibitions were organized, which had a positive effect on the attendance of the archaeological museum of Kavala, which significantly increased the number of visitors during the autumn months. Also, in the last quarter of the year, the Ephoria implemented an educational program that is still ongoing, on the subject of ancient currency.

The problem is the lack of staff

Having under its supervision three large museums (Kavala, Philippi and Thassos, with a total area of ​​6880 sq.m.), a famous archaeological site included in UNESCO, many more scattered archaeological sites, the Ephorate of Antiquities of Kavala – Thassos is the largest in the whole Region of Eastern Macedonia and Thrace.

However, as Ms. Dadaki pointed out, the lack of sufficient staff (currently only 23 people are employed in all sectors: archaeologists, security guards, engineers, administrators) and the large volume of work create delays in the smooth service of citizens and institutions which together with the implementation of the archaeological legislation are a priority. In many cases, however, the employees of the Ephorate go beyond themselves in order to respond to the increased maintenance and decency obligations of all archaeological sites and primarily to serve the citizens.

Facebook
Twitter
Pinterest
WhatsApp
Previous article
Politico: Eva’s sister Kaili tries to ‘disappear’ her company from EU transparency files
Next article
Theodorikakos: “Provocative and unprecedented lies of SYRIZA – They will be ashamed in the future”