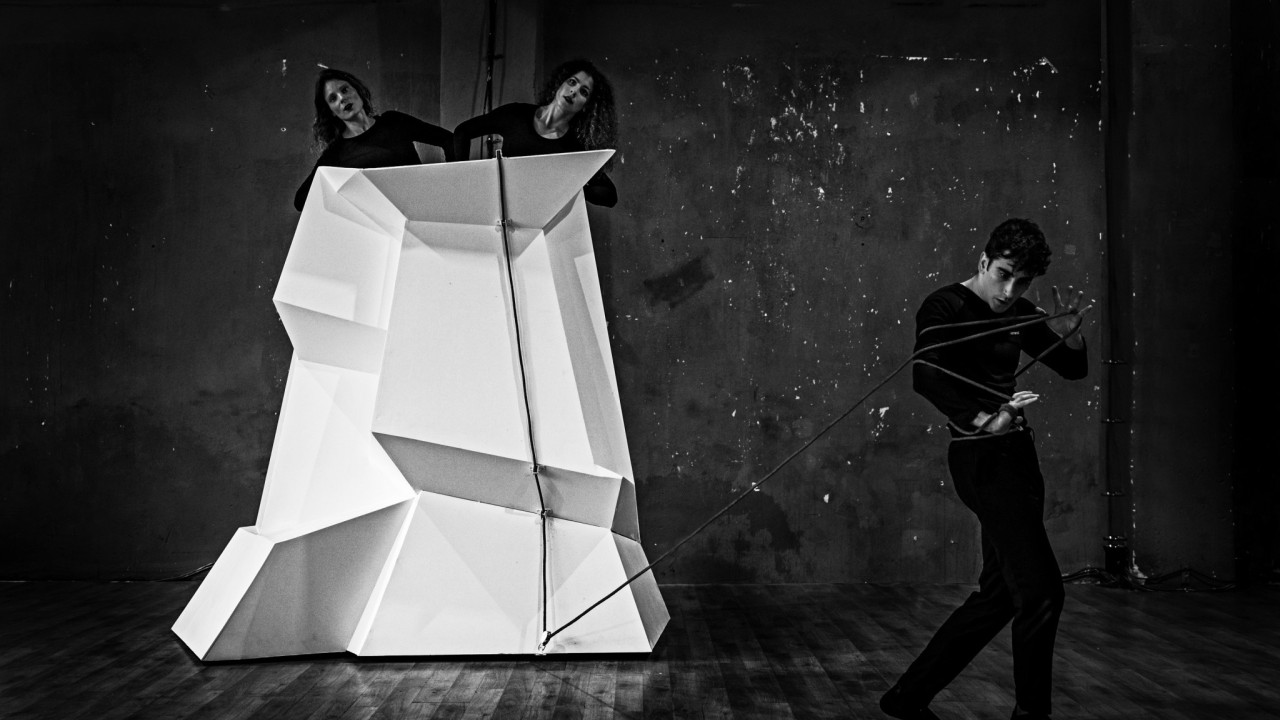 His cascading monologue Samuel Beckett “Not I” (1972), from the most haunting and demanding pages of the world theater repertoire, comes to the Alternative Stage of the National Opera at the SNFCC from February 18 and for six performances, until March 3, 2023, in co-production with the Zero Point Group.

This new reading of one of the most emblematic post-war works, commissioned by the ELLS Alternative Stage to the innovative composer Zisis Seglia and the director Savvas Stroumbo, a persistent and uncompromising worker of the research theater, confronts the limits of an intractable enigma, but at the same time with a stimulating challenge.

In the daring approach of the two artists, the Beckettian sonic and semantic “abyss” is rendered not by a single mouth, as in the creator’s original writing, but by two bodies in vocal and kinesthetic counterpoint, at the same time abstract and condensed to the highest degree. The new translation, made especially for the performance, is signed by Thomas Symeonidis, a deep connoisseur of Samuel Beckett, while the musical direction has been undertaken by Nikos Vassiliou, known for his interpretations of contemporary music works. It features a nine-member musical ensemble.

Written in 1972 with the actress Billie Whitelaw in mind, Samuel Beckett’s “Not Me” is a woman’s verbal torrent triggered in the wake of a traumatic event, inscribed on the body and repressed for years from memory. Through his abstract stage poetics, the Irish dramatist captures the torrential diarrhoea of ​​a floating female mouth in the wake of an unspecified event, under the gaze of a mysterious, featureless listener figure. In its stripped-down theatrical performance, the duration of the monologue is only fifteen minutes, while the author’s instruction is for the actress to deliver it breathlessly. The play premiered in 1972 at the Forum Theater of Lincoln Center in New York and, from every point of view, physical, intellectual or emotional, it is one of the most demanding monologues in world theatre.

The musical challenge of the project

The demanding musical composition of the show bears the signature of Zisis Seglia, whose work focuses on the relationship between sound and the semantics of the voice and the integration of musical language and speech. Regarding his encounter with the work of Samuel Beckett, the composer points out: “The musical dimension in “Not I” is ultimately nothing more than an expansion of the space where this meta-mouth is located. In the authentic performance, we have a mouth and a silent figure-listener in the utter darkness, the utter abyss, the nowhere; in our testimony, we keep the treaty as it is, not on the surface but at its core. What changes through musical theater, physical and dramaturgical work is the space that surrounds this condition, as in the effort to listen to Beckett inevitably – but also in vain – this space reveals its multiple dimensions”.

Directing “Not Me” as a crater with two bodies

The director and founder of the Simio Miden Group, Savvas Stroumbos, known for the serious, collective and laboratory work on the texts and expressive means of the actors that he has been faithfully carrying out for years, notes: “In our performance of “Not Me”, the role of the mouth is played by two actresses with whom we have been working for nine years: Elli English and Evelyn Aswad. These are two excellent collaborators who have traveled miles of stage presence in the shows of the Zero Point Group, facing interpretive challenges that often exceed the humanly possible. The role of the figure is held by Babis Alefantis, also an excellent actor with whom we have been working for the last few years. The two women belong to the same body. They emerge from a crater, creating the condition of a strange, modern and wounded Prometheus. The idea of ​​the stage installation was developed by my collaborator, stage designer and costume designer Katerina Papageorgiou. The illumination of the world of the Beckettian explosion of the memory of the trauma was realized by my constant partner, already since the founding of Simeio Miden in 2008, Kostas Bethani.

Facebook
Twitter
Pinterest
WhatsApp
Previous article
Bartholomew on the Ukrainian Autocephalous: “The Church of Russia has papal claims, not the Ecumenical Patriarchate”
Next article
Intra-governmental fight in Britain over the length of stay of foreign graduates in the country