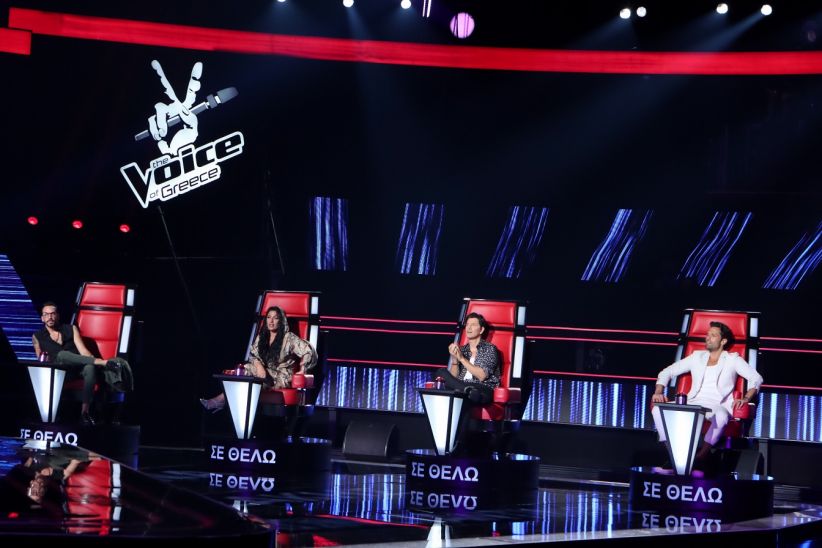 The Voice Of Greece: First on TV this weekend (pics)

The Blind Auditions were completed and the fanatical viewers of The Voice of Greece tuned in to the Knockouts with high ratings this weekend as well.

Specifically, The Voice of Greece with Giorgos Lianos was first on TV on Saturday both in the general audience with a percentage of 24.8% and in the dynamic audience (18-54) with 20.3%.

The viewing of the program moved to high levels on Sunday as well, with the top talent show being first with 24.7% in the overall total and 19.9% ​​in the dynamic audience. Indicatively, we mention that on Sunday, 3,219,847 viewers watched The Voice of Greece, even for the 1st time.

On Saturday, Konstantinos Argyros, Panos Mouzourakis, Elena Paparizou and Sakis Rouvas completed their teams by carefully selecting the voices that deserved the qualification. On Sunday, the coaches joined forces with four talented artists who were by their side for the knockout phase: Eleonora Zouganeli, Kostis Maravegias, Christos Dantis and Marina Satti!

The highlights of the night include the on-stage appearance of Sakis Rouvas with guest coach Marina Satti in an explosive performance partnership.

The knockouts had anxiety and great performances and the coaches had to make the difficult decision of who would go on to the talent show by choosing between three people on their team each time and hoping that one of the other coaches would give a second chance to a contestant making use of steal. As Elena Paparizou did in the case of Aria Kavalaris, whom she “stole” from Sakis Rouvas’ team when he chose to continue with Irini Stillo.

We also had the first steal from Konstantinos Argyros who stole Eva Mavrantonaki from Elena Paparizou’s team. The enjoyable moments were many, but the appearance of Sophocles Christodoulou certainly stood out, who had fun with “Journey to find you” and after the decision of Panos Mouzourakis to choose him for the sequel, he made an original gift to Sakis Rouvas!

After the completion of the first episode of Knockouts in the next phase of the Battles continue:

With the team of Panos Mouzourakis: Maria Symeou and Sophocles Christodoulou.

The Knockouts at The Voice of Greece continue this weekend with shocking matches and a surprise duet!

Facebook
Twitter
Pinterest
WhatsApp
Previous article
Temporary restriction on the marketing of cosmetic products for professional use SKY
Next article
What are the 3 most wasted signs?