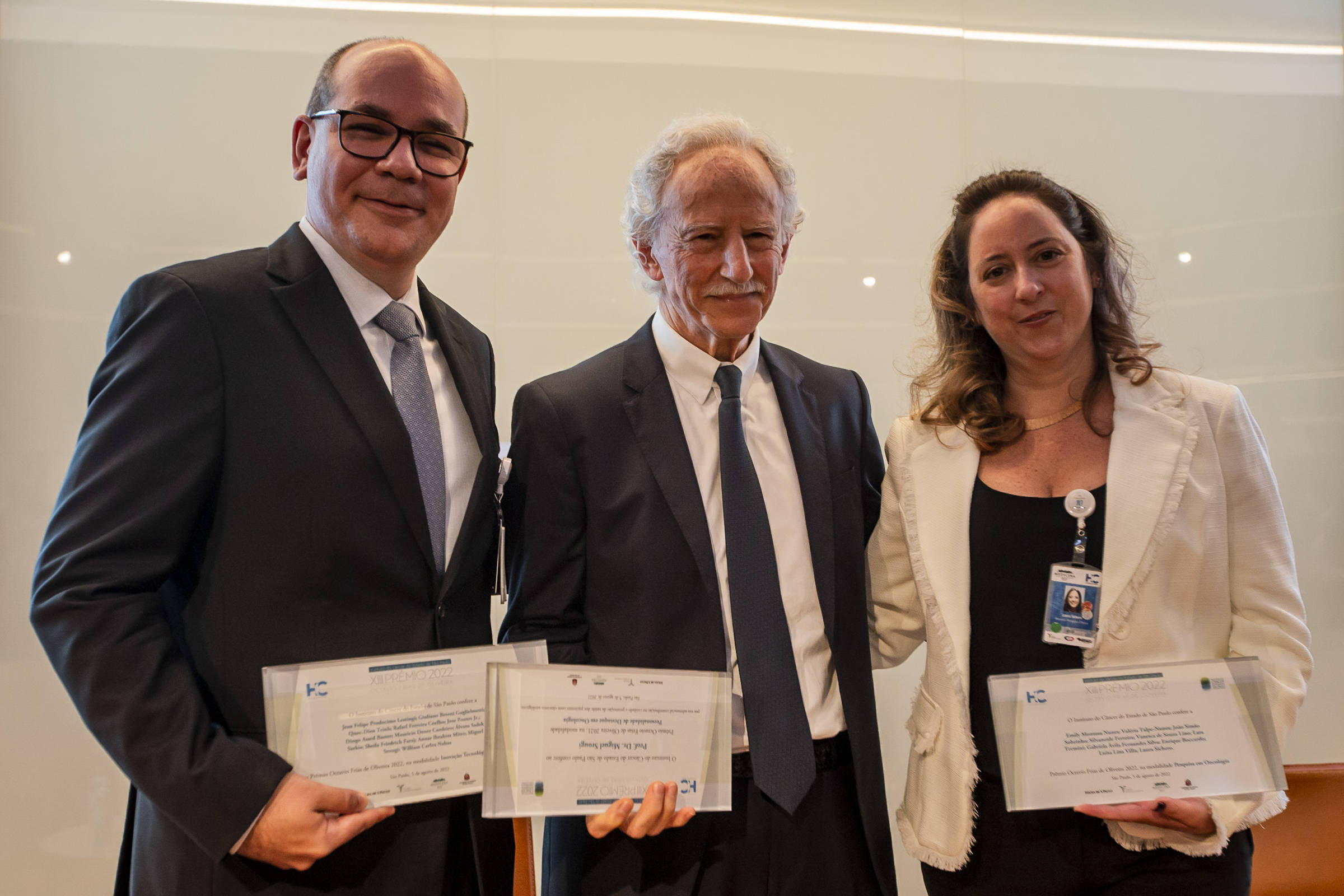 Research on the influence of the HPV virus on the development of cancers and another on the importance of removing pelvic lymph nodes after severe cases of prostate cancer were awarded this Friday (5th) at the 13th edition of the Octavio Frias de Oliveira Award. The award for Outstanding Personality in Oncology went to renowned urologist Miguel Srougi.

The awards were delivered at the ICESP auditorium, in São Paulo.

At the opening of the event, the chairman of the board of directors of ICESP, Paulo Hoff, said that the quality of the works presented has increased year after year. “A lot of them [dos trabalhos inscritos] could have received the award this year, for the quality of what is being done in Brazilian universities, with great difficulty. We live in a strange moment, in which science has to keep proving itself sequentially and is very questioned.”

The editorial director of Sheet, Sérgio Dávila, recalled that the award takes place annually on the birthday of Octavio Frias de Oliveira, who was born 110 years ago. “With the award in the name of ‘your Frias’ [como era carinhosamente chamado] the meeting between research and journalism is summarized. Between the best knowledge and the best way to treat it: in the sunlight, in a way that people, even non-specialists, can understand its challenges and its admirable advances.”

The award in the Research in Oncology category went to scientist Laura Sichero, who coordinates the Molecular Biology Laboratory of the Center for Translational Investigation in Oncology at ICESP. The researcher and her team were awarded for the look they directed towards variants of HPV (Human Papillomavirus).

There are more than 200 types of HPV described. There are also variants, that is, HPVs that are of the same type, but with slightly different genetic codes.

Some of these types of HPV are associated with certain cancers. For example, HPVs-16 and 18 (the numbering indicates a type of virus) are more commonly found in cases of cervical (also called cervical) cancer.

For certain variants of HPV-16, the scientific literature has more clear the oncogenic potential and the higher risk of developing cervical cancer. For type 18, however, there are still conflicting data.

Sichero’s team then decided to analyze the evolution of the characteristics of cells with persistent infections by the A1 and B1 variants of HPV-18 and verify the potential for the evolution of cancers from them.

The researchers evaluated, in in vitro studies, the “hallmarks” of cancer, that is, “marks” that differentiate cancerous cells from common ones. Among them are immortalization —the ability of cancer cells to replicate indefinitely—, the ability to invade other tissues, and migration.

By analyzing these “hallmarks” in cells infected by the two variants, the team was able to understand a little better what leads the A1 strain to have a greater oncogenic potential — that is, to increase the chance of cancer — in relation to B1.

According to Sichero, from this greater knowledge of the cellular processes that lead to a type of cancer, it is possible to begin to imagine therapeutic targets to stop the evolution of the disease.

“It’s a very long-term process to get out of basic research and into [prática] clinical trial,” said Sichero, about the possibility that this type of study could result in treatments.

Sichero highlights that the award is a reward for years of dedication to cancer research. “I do it with a lot of passion and dedication.”

The effort also has a personal component: the researcher’s father, Gustavo Sichero, died of cancer when she was 16 years old. “I promised him that I would work the rest of my life fighting this disease.”

The award for Technological Innovation in Oncology went to Jean Felipe Lestingi. The ICESP urologist was awarded for the research he led on the importance of more extensive removal of pelvic lymph nodes in operations for severe prostate cancer (in general, this disease is the second type of tumor that most kills men in Western countries).

Lymph nodes are, in short, lymphatic drainage stations that house the body’s defense cells, especially lymphocytes. The problem is that cancer cells can spread to other areas of the body in addition to the original site of the disease (such as the prostate, for example) – what is known as metastasis – and one of the possible sites of invasion and installation is the lymph nodes.

“The need to remove these lymph nodes in the treatment of patients with prostate cancer has been discussed for years,” said Lestingi. “But you didn’t have a study that showed whether you needed to take it out, there was a lot of controversy about it.”

With that in mind, the researcher and his team designed and started, with the support of ICESP, about a decade ago, a randomized study (in which patients are chosen and distributed among the research arms at random) and with a control group (a slice of the participants do not receive the studied treatment — in this case, the extensive removal of lymph nodes — and, therefore, it serves as a basis for comparison for the effectiveness of the treatment).

Although, until then, there was already an indication for extensive lymph node removal, there were no studies with more robust evidence on the benefits of the practice, said Lestingi.

In the research for which he was awarded, Lestingi recruited, from May 2012 to December 2016, 300 patients with intermediate or high-risk prostate cancers and candidates for surgical treatment. Of this group, 141 patients had the most extensive lymph node removal and 149 the most limited. Study participants were further followed for five years after prostate cancer surgery.

The ICESP researchers observed that in the most severe patients, the more extensive removal led to a lower recurrence of PSA (prostate-specific antigen) – a protein used as one of the indicators of the presence of prostate cancer -, that is, this group, after surgery , had a lower chance of remaining active with the disease.

“This suggests a potential benefit of removing lymph nodes in a complete manner in these patients with a more severe initial biopsy,” said the urologist.

The study also showed that the wider removal of lymph nodes allows a better staging of the disease, which can be translated into a better diagnosis of the spread of cancer in the patient’s pelvis, considering that imaging tests are still unable to verify the extent of the problem, according to the researcher.

Lestingi stressed that the potential benefit of lymph node removal does not apply to all patients, but rather to the most severe cases of prostate cancer.

Urologist Miguel Srougi, 75, was chosen as Outstanding Personality in Oncology at the 13th edition of the Octavio Frias de Oliveira Award.

Srougi is considered a reference in the urological area in Brazil and accumulates thousands of patients. According to him, there are more than 6,500 operations for prostate cancer and more than 5,000 for bladder cancer.

“Each patient I help is a punctual action, but around this patient there is a community of people. I understand now that it was not 6,000 people that I cured. It was a large population of people who benefited from this”, said the urologist. “It gives me a feeling of continual happiness, because I managed to change the world a little on my way.”

Graduated in medicine at USP (University of São Paulo) in 1970, Srougi did his residency in surgery-urology at the HC (Hospital das Clínicas) of the USP School of Medicine from 1971 to 1974.

From 1976 to 1977, he spent a postgraduate internship in urology at Harvard Medical School, in the USA. Then came the master’s, doctorate and full professorship, again at USP.

The affection for USP, however, remains strong. This Friday, during a conversation with the award winners, Srougi revealed that he arrived an hour and a half before the award time.

“I’ve been walking through the halls of college [de medicina da USP, que fica quase ao lado do Icesp]. I almost cried. It’s part of my story. I lived glorious moments of my youth, where naively…”, said the urologist, who interrupted the sentence emotionally. Then, he happily told, in a joking tone, that he discovered that he had a free pass to attend USP’s medical school for the next few years.