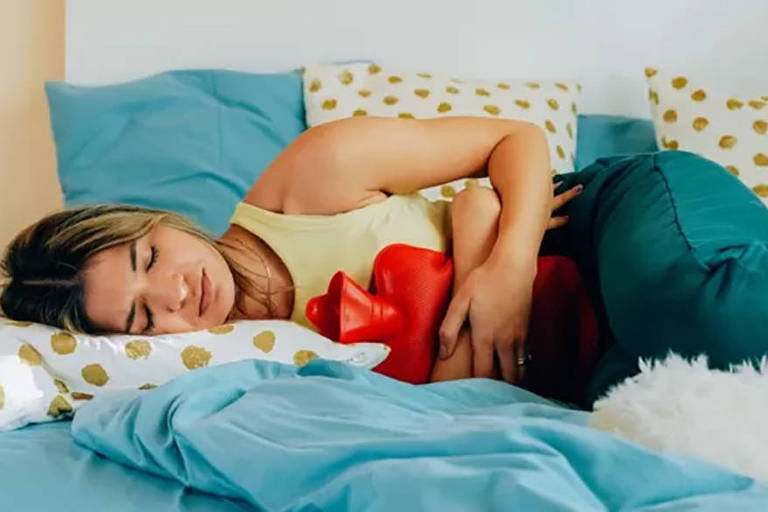 Colic: When Should We Worry About Pain During Menstruation?

Most women experience pain during their menstrual cycle.

This pain is usually felt as abdominal cramping, which can spread to the back, thighs, legs, and other parts of the body. It may be experienced moderately and steadily during your period, or as stronger, more painful spasms. Women may also experience nausea, diarrhea and headaches.

The truth is that pain during menstruation varies a lot between women, from the exact place on the body where it is felt to the intensity with which it occurs.

Why do we have menstrual pain?

“Between 30 and 50% of women have painful periods, and some are so bad they affect their lives,” Katy Vincent, a pain researcher at the Nuffield Department of Women’s and Reproductive Health, told the BBC.

“When we are menstruating, the uterus contracts so that the blood can come out,” she explains. “And that feeling of lightheadedness and uneasiness that you feel is associated with the expulsion of the clot. It’s probably the cervix opening up a little bit to let the clot through and that’s accompanied by a contraction.”

It is also known that a lot of inflammation occurs during the period.

The tissues of the uterus release chemicals that cause pain, and at the same time, the body produces so-called prostaglandins, which increase during the menstrual period. Prostaglandins are fatty compounds that are produced in cells and have a wide variety of functions in the body.

During menstruation, for example, they cause the uterine muscles to contract and are involved in the inflammatory response, which causes pain. Prostaglandins are not hormones, but they are often associated with them because of the way they work.

“We definitely think that prostaglandins are one of the factors that contribute to the increase in inflammation and pain during menstruation,” says the doctor.

But what is the function of this inflammation?

“Inflammation has a lot of positive functions. When you’re injured, inflammation occurs that carries out a process that helps the tissue heal and makes you realize that the injury hurts to protect the tissue while it’s healing,” says Vincent.

It is a necessary process that allows the body to repair itself. So, during menstruation, all the cramping and all the pain is a result of the fact that prostaglandins help the lining of the uterus to heal properly and ensure that all menstrual fluid is expelled from the uterus.

The problem occurs when this process occurs in excessive amounts.

When to be concerned about menstrual pain

For many women who experience pain during menstruation, the condition can be relieved with pain relievers or anti-inflammatory drugs.

But in some cases, menstrual pain can be caused by an underlying medical condition.

One such disorder is uterine fibroids, also called fibroids, which are non-cancerous growths that can grow in or around the uterus and can make menstrual periods heavy and painful.

Menstrual pain can also be caused by pelvic inflammatory disease (PID), a bacterial infection of the uterus, fallopian tubes, or ovaries.

PID is often caused by bacteria from sexually transmitted infections such as chlamydia and gonorrhea. And having unprotected sex with someone who has these infections can cause PID.

Menstrual pain can also occur due to the IUD, the intrauterine device that is used for contraception and is inserted into the uterus to prevent pregnancy.

But perhaps one of the most important causes of pelvic pain is endometriosis.

“We define endometriosis as the presence of tissue from the lining of the uterus – the endometrium – outside the uterus, in abnormal locations such as the pelvic region, ovaries, bladder or bowel,” explains Andrew Horne, Professor of Gynecology and Reproductive Sciences at the University of Edinburgh. , Scotland, which has been researching the causes of endometriosis.

In addition to pelvic pain, endometriosis can cause problems conceiving and even miscarriage. The disease affects between 6 and 10% of women,

The exact cause of endometriosis has not yet been found.

“We shouldn’t underestimate the impact endometriosis can have. It really is a terrible disease for people who have it. But our understanding of why this disease causes pain is quite limited,” says Horne.

According to the specialist, one of the main problems faced by women with this disease is the difficulty in diagnosing it.

“Symptoms of endometriosis are often ruled out because they are considered normal (with menstruation),” she notes. “The other big problem is that endometriosis often has the same symptoms as other disorders like irritable bowel syndrome or painful bladder syndrome. So it’s not an easy disease to diagnose.”

The “classic” symptom, explains Horne, is cramping during menstruation. But colic can also appear outside the period, when defecating, urinating or during sexual intercourse.

Also, endometriosis cannot be diagnosed with blood tests. A laparoscopy is required to confirm the presence of the disease. This is a surgery in which a small abdominal incision is made where the surgeon inserts an observation instrument – a laparoscope – to detect endometriosis within the pelvic cavity.

There is no cure for endometriosis, but several treatments can relieve symptoms.

Endometrial growths can be removed with surgery. In severe cases, a hysterectomy may be done to remove the entire uterus. And there is also a hormonal treatment.

But the goal of endometriosis research is to develop a cure for this disorder: a drug or treatment that can stop the disease and ease the pain for many women.