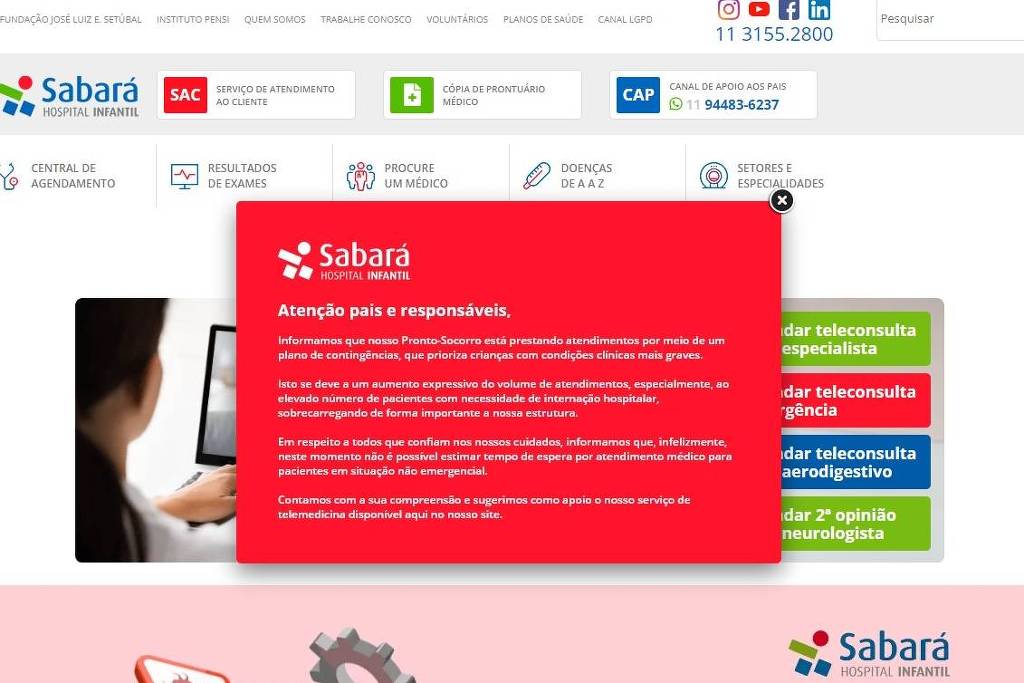 The increase in the number of flu cases in the state of São Paulo was reflected in the corridors of emergency rooms, igniting an alert for the possibility of a new outbreak in the country.

In children’s hospitals Sabará, Darcy Vargas and Cândido Fontoura, in the capital of São Paulo, the increase in demand for care was 20%. The growth was repeated in the pediatric units of the Albert Einstein Hospital and of the NotreDame Intermédica network, which is also located in the city.

According to Marcelo Gomes, coordinator of InfoGripe, an initiative conducted by Fiocruz to monitor SARS (Severe Acute Respiratory Syndrome) cases in the country, about 20% of laboratory tests carried out in the last four weeks in SARS cases in the state of São Paulo had results. positive for influenza, an increase, he said, unusual at this time of year.

At the moment, the cases are more concentrated in children and in the capital, but they can spread to other age groups and regions.

“Any respiratory virus that begins to circulate with greater intensity in São Paulo can spread to other capitals because the flow of people is very large. It serves as a sentinel for the rest of the country. so we don’t miss the opportunity for action”, says Gomes.

Researchers expected the virus to manifest itself more strongly at the end of the first semester, but it did not. At the time, cases associated with the flu began to rise, but soon those of Covid started to grow again and dominated the scenario.

Shortly after, with the end of the school holidays, many children became ill, but influenza was not identified as the dominant virus, which began to change in recent weeks. “We began to observe, mainly in São Paulo, a new growth, with positive laboratory results for influenza A, mainly H3N2”, says Gomes.

According to the researcher, there is still no clear reason for breaking the seasonality of influenza. Mask use and social distancing imposed by the Covid-19 pandemic have drastically reduced the circulation of respiratory viruses, but since these precautions have been reduced, viruses seem to circulate differently.

“If we think about the end of November, beginning of December of last year, there was a very strong behavioral variable: it was when we started to circulate and to expose ourselves more. The H3N2 virus that was waiting there came and we had an outbreak of flu out of season . This year, we no longer have a change in behavior”, he adds.

One hypothesis is that the viruses would compete with each other and that the greater circulation of Sars-CoV-2 at certain times could generate a kind of barrier for other respiratory viruses, but studies are still needed to demonstrate this effect. “The fact is that, yes, the seasonality of the flu has been broken. Whether it will return is something that time will tell”, says Gomes.

The increase in out-of-season cases is worrying because the beginning of spring is a period traditionally associated with an increase in respiratory problems in children. “Usually, we have two more critical periods in the year: from March to June and then in October. However, we are observing a high demand since August of last year”, says Thales Araújo, medical manager of the emergency room of Sabará.

Araújo reports that, especially in the last five days, there has been an increase in children who arrive with nasal congestion and high fever and who test positive for influenza.

The discharge was also observed in the emergency rooms of Darcy Vargas and Cândido Fontoura hospitals, state references for pediatric care. According to the Secretary of State for Health, the main diagnoses are cases of flu, basically involving fever, cough, runny nose, sore throat and wheezing.

According to the folder, with the reduction and fluctuation of temperatures at this time of year, it is common for children to be hospitalized for SARS.

In the case of the Menino Jesus Municipal Children’s Hospital, a reference in the care of children and adolescents in the capital of São Paulo, 40% of the demand for care is associated with respiratory symptoms, which may be related to allergies and viruses. There was, however, no increase in the flow of patients in recent weeks.

Gomes and Araújo emphasize the importance of vaccination, even more so at times like this. At the end of June, flu vaccination coverage in the capital was at 55%, well below the target of 90%.

For him, it is necessary to use not only the coronavirus as a parameter of care at the population level, but also viruses such as syncytial, which can lead to complications and hospitalizations of children. He defends maintaining the learning provided by the pandemic and the use of masks in times like this, of increased influenza and risk of a new outbreak in the country.