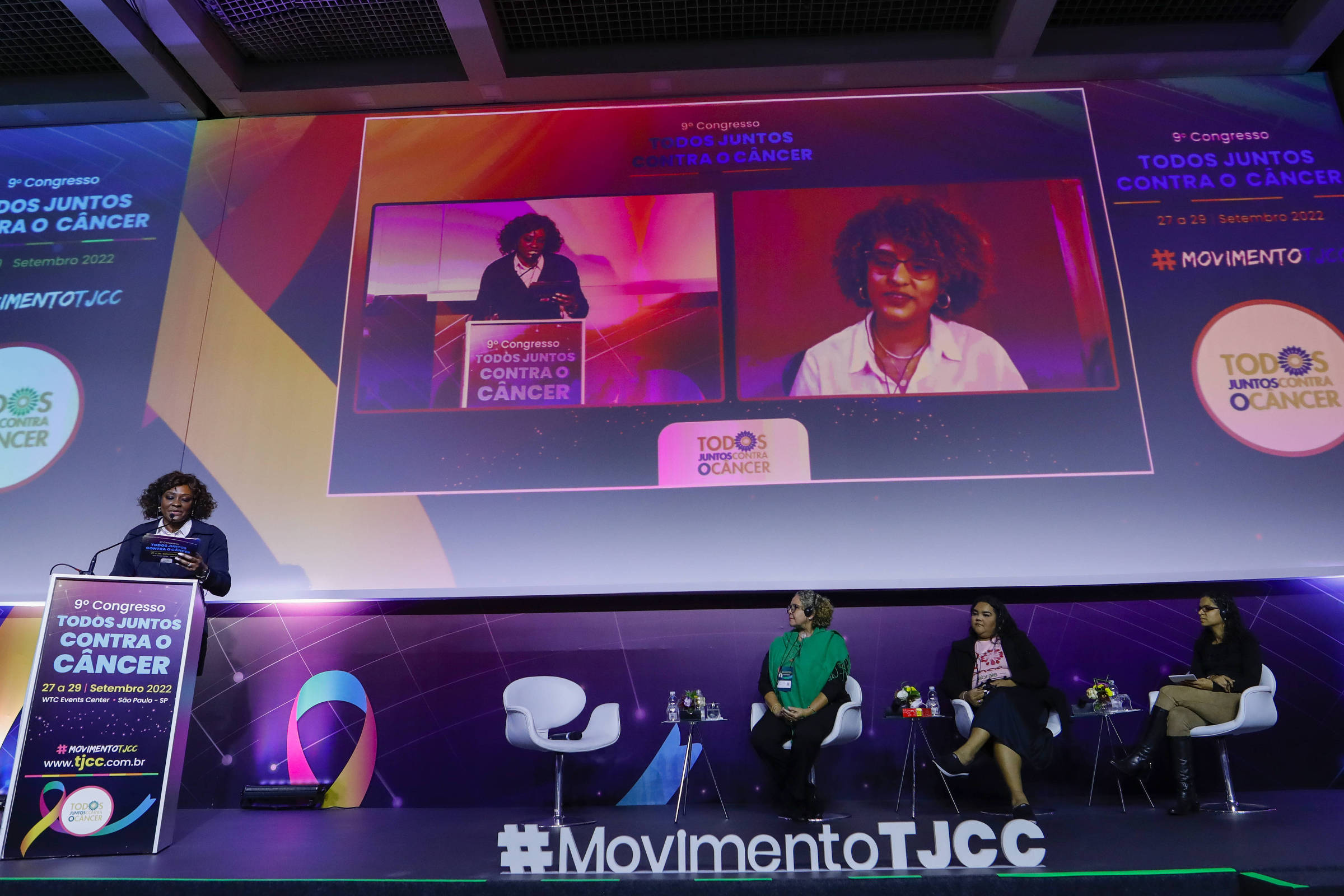 More than 11 million women are single mothers in Brazil, of which 7.8 million (61%) are black and, among them, 63% are below the poverty line, according to the IBGE (Brazilian Institute of Geography and Statistics).

In this context, the chances of late diagnosis of cancer increase due to the lack of access to consultations and exams in the SUS (Unified Health System), and the treatment, which is more complex, requires that the team also pay attention to social issues.

With the mediation of Joyce Ribeiro, journalist and presenter of Jornal da Tarde, on TV Cultura, specialists and patients discussed the challenges of cancer treatment for single mothers during a panel held this Wednesday (28), second day of the 9th Todos Juntos Contra Cancer, promoted by Abrale (Brazilian Association of Lymphoma and Leukemia).

Social vulnerability is directly linked to the origin of diseases, says Ana Amélia Almeida Viana, an oncologist specializing in female tumors at the Hospital das Clínicas at UFBA (Federal University of Bahia).

In the case of single mothers, for example, there are not always conditions to practice physical activities and have a good diet due to overload of tasks, lack of time to take care of themselves and insufficient financial conditions. Consequently, these women are more exposed to risk factors for cancer, such as physical inactivity, diabetes and obesity.

Another problem is the lack of access for black and peripheral women, the main users of the SUS, to consultations and exams in a timely manner.

Thus, they are also subject to the aggravation of diseases, explains Denize Ornelas, family and community doctor and coordinator of the black population health working group at SBMFC (Brazilian Society of Family and Community Medicine).

When it comes to health services, this group is not taken seriously because of stereotypes that black women feel less pain, she says.

Pain and physical suffering need to be seen as a consequence of social problems such as hunger and violence, says Ornelas. In order to have an intersectional approach in the care of single mothers with cancer, health professionals must know the impact of inequalities caused by racism and social vulnerability.

For Melissa Medeiros, 51, founder and president of ACBG Brasil (Brazilian Association of Head and Neck Cancer) and laryngeal cancer survivor, the reception of single mothers with the disease must consider the context.

As they are breadwinners, they cannot stop working to dedicate themselves only to treatment. A humanized care must include, he says, issues such as displacement so that patients do not abandon treatment.

Nursing student Itaciara Monteiro, 36, a patient with chronic myeloid leukemia, knows the impact of cancer on families supported by single mothers from different perspectives. As a daughter, still in childhood, she saw her mother leave her job to accompany her from Manaus to São Paulo in search of treatment — the father did not travel and was responsible for taking care of his youngest son, but he divorced shortly afterwards.

The separation led to a drop in income, and Itaciara had to work since adolescence to help support the household and pay for medication. Today, as a single mother of a 13-year-old boy, she, who works in the marketing area, is primarily responsible for taking care of herself and her son.

Accountant Cristiana da Silva Gomes, 44, diagnosed in 2018 with breast cancer, underwent surgery, chemotherapy, radiotherapy and, in all these moments, had only her son, who is now 18, cared for. For her, the journey of the cancer patient is hampered by barriers to access, in the SUS, to exams such as mammography, essential for the early identification of breast tumors.

There is also a lack of studies with a racial focus for cancer to be effectively screened among black women, experts say.

Viana, who is also a member of the SBOC (Brazilian Society of Clinical Oncology) in Salvador (BA), states that, although the black population is smaller in the United States than in Brazil, North Americans produce more research on illness with a racial background. , including to understand its relationship with cancer.

This makes it possible to verify the incidence of the disease in more depth, he explains. During her speech, the oncologist showed that, in the USA, black women are more exposed to infectious agents such as the HPV and HIV viruses, in addition to the bacteria H. pyloritriggers for tumors, respectively, in the cervix and stomach.

In Brazil, this type of information would help patients and physicians to pay attention to symptoms and improve clinical outcomes. One of the ways for this to occur, says Ornelas, is to encourage students and researchers to develop studies on health based on race or color.

Facebook
Twitter
Pinterest
WhatsApp
Previous article
Controlled inflation is the most important for jobs, says Campos Neto about Lula’s plan
Next article
Volkswagen tells MPT it is not responsible for slave labor on a farm in Brazil