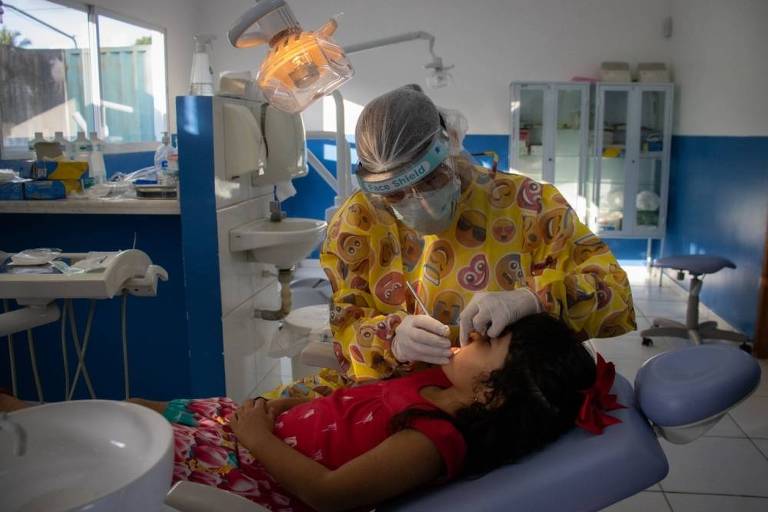 A study that followed 800 children shows that the inclusion of sugars in the diet accompanied by the early interruption of breastfeeding are the main factors that contribute to the incidence of caries up to 2 years of age. The World Health Organization (WHO) recommends exclusive breastfeeding up to six months of age and, in addition, for at least 24 months. The WHO also recommends that sugars not be introduced before the age of 2.

The work was carried out within the scope of the MINA Study —Maternal and Child in Acre: birth cohort of the western Brazilian Amazon, which follows a group of children born between 2015 and 2016 in Cruzeiro do Sul (AC) and is funded by FAPESP (read more here and here).

Results were published in the journal Community Dentistry and Oral Epidemiology.

“Some previous studies have pointed to the association between prolonged breastfeeding [após 1 ano de idade] and the occurrence of caries, without adequately assessing the role of early sugar consumption by these children. Our work identified that the effect of prolonged breastfeeding on the increased risk of dental caries was mediated by sugar consumption”, explains Marly Augusto Cardoso, professor at the Faculty of Public Health at the University of São Paulo (FSP-USP) and project coordinator.

“The results corroborate what is known about the role of free sugars in the development of caries. On its own, lactose in breast milk does not cause this type of problem. Practically all children in the study were exposed to sugars at an early age”, summarizes Jenny Abanto, first author of the work, carried out during a postdoctoral internship at the Department of Epidemiology at FSP-USP, and currently a professor at Faculdade São Leopoldo Mandic, in São Paulo.

Among the 800 children monitored, the prevalence of caries was 22.8%, that is, two out of ten. Seen in isolation, the numbers show that those breastfed after 24 months of life would be at greater risk than those who received breast milk for 12 months or less. However, the incidence of caries in breastfed children up to 2 years of age decreased with lower sugar consumption.

“We observed that breastfeeding up to 24 months reduces the consumption of ultra-processed foods or foods with added sugar, thus acting as a protective factor against cavities”, says Cardoso.

Information on food consumption was obtained through interviews, in which mothers or caregivers reported what the children had eaten in the previous 24 hours. In various types of food and drinks, such as teas, juices, milk and porridge, for example, the researchers also recorded the amount of added sugar.

The occurrence of caries was lower when taking into account family income, schooling and skin color of the mother or caregiver. Children of black, poorer women who attended school for less time formed the group with the highest frequency of caries.

The high consumption of sugars results in the formation of a cariogenic dental biofilm, better known as bacterial plaque, which contributes to caries. In it, human milk can change its characteristics and help in the demineralization of the enamel. However, it is the consumption of sugar that starts this process. The increased frequency with which plaque is exposed to human milk is probably responsible for the caries risk observed in breastfeeding from 12 months of age.

The researcher also argues that, in the first years of life, eating habits begin to consolidate. The foods that children become accustomed to at this stage therefore influence their preference throughout life. Which is one more reason to avoid sugar consumption before age 2.

Currently, even juices with 100% fruit are not recommended by the WHO, the Ministry of Health and the Brazilian Society of Pediatrics in the first year of life. Although these products do not have added sugar, when the fruits are squeezed the sugar is freed from the fibers and causes an effect similar to sucrose obtained from sugar cane, for example. WHO recommendations do not apply to the consumption of intrinsic sugars present in fresh (whole) fruits and vegetables, but only to juices or concentrates.

“The WHO recommends exclusive breastfeeding for the first six months of life and continued until the age of 2, with the introduction of fruits and food from the age of six months, in addition to not consuming sugars before the age of 2”, concludes Cardoso.

The article Prolonged breastfeeding, sugar consumption and dental caries at 2 years of age: A birth cohort study, can be read here.

Facebook
Twitter
Pinterest
WhatsApp
Previous article
Jim Carrey: He revealed that he was trained by a CIA agent for the film “The Grinch”
Next article
National Gallery: The trial of the 50-year-old oil painter begins for the “theft of the century”