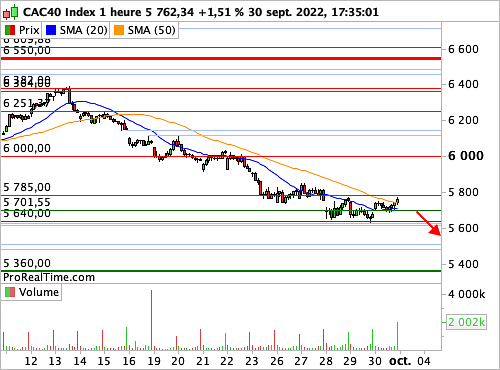 (News Bulletin 247) – The CAC 40 (+1.51% to 5,762 points on Friday) ended a trying month of September, which saw it bluntly break the symbolic threshold of 6,000 points, against a backdrop of a toughening tone bellicosity of the major central banks, fears of an imminent entry into recession of the main economic poles of the planet, and an increase in geopolitical tensions. Over the month as a whole, losses on the flagship Parisian index amounted to nearly 6%, in accelerating volumes. Among the main victims on compartment A of the Parisian coast, the shares of automotive suppliers, like Faurecia (-23.19%), Valeo (-18.55%), or Plastic Omnium (-27.78 %).

The risk of capitulation cannot be ruled out, even as a high-risk earnings season looms. “Central banks reminded investors that inflation was their number one priority. Despite the deterioration in major economic indicators, the Fed hinted that its inflection point was far from being reached. he summer quickly dissipated and volatility returned to the markets,” summarizes Vincent Manuel, Chief Investment Officer, Indosuez Wealth Management.

In terms of statistics, the prospect of a restrictive monetary policy for the coming months is reinforced by the publication on Friday of PCE inflation (Personal consumption expenditures price index), the Fed’s favorite measure in its assessment of the inflation. However, prices have once again exceeded the values ​​expected on average by the economists and analysts surveyed.

Tensions on interest rates are bound to rise and – isn’t that the almost avowed goal? – weigh on growth. But to what extent? “This is a major unknown” for Jean-Marie MERCADAL, Deputy Managing Director in charge of management and Eric BERTRAND, Deputy Managing Director and Director of OFI AM Management. “There is currently a lag between the strength of the labor markets, with rather low unemployment rates, and the rapid deterioration of the leading indicators of the economy. Several explanations can be put forward: companies have until now financial situations rather healthy, so much so that they do not lay off workers because of the subsequent difficulty in finding qualified labour.This shortage, which generates wage increases, is moreover one of the major concerns of fed.”

A point on the other risky asset classes: around 08:00 this morning on the foreign exchange market, the single currency was trading at a level close to $0.9810. The barrel of WTI, one of the barometers of risk appetite in the financial markets, was trading around $81.80.

To be followed in priority on the statistical agenda this Monday, a battery of PMI industrial activity indicators in the Euro Zone, as well as the American ISM manufacturing PMI at 4:00 p.m.

The symbolic 6,000 points were broken under validating conditions of volume and volatility, and the new work zone identified between 5,785 and 6,000 points will have been crossed in one go last week. At this stage, the possibility of a technical reaction will take shape. We lacked the materialization of the conditions for its implementation.

We mentioned Monday morning the possibility of a candle in harami or sharp downward acceleration from the start of the session. It is actually in “inverted hammer” which comes to give us a signal of the same nature. Unfortunately it was not validated by the next candle, red and without any lower shadow. Only the ability to close above the September 26 highs would reinforce the idea of ​​a rapidly developing technical rebound. We are not there yet.

It is now the observation of gaps (common, shortness of breath), which will be essential to “timer”, if necessary, the birth of a short movement of capitulation. It is time, more than ever, to identify the files (at high Beta) that will rebound the most after this capitulation.

This bearish scenario is valid as long as the CAC 40 index is trading below the resistance at 5785.00 points.

Facebook
Twitter
Pinterest
WhatsApp
Previous article
“Super agers”: The “super-secret” of the 80-year-olds who have a very good memory
Next article
Registration for the INSS 2022 contest ends this Tuesday