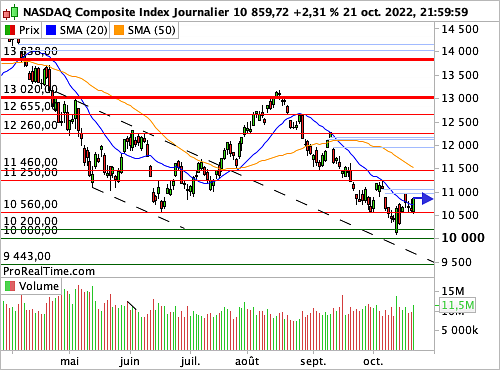 Nasdaq Composite: Drifting below the remainder of the 07/10 gap

(News Bulletin 247) – A bit of air against a background of (slight) easing in yields on 10-year sovereign bonds, the Treasuries 10 years pointing in the immediate vicinity of 4.20%, in a market attentive to the slightest weak signal allowing to consider a slowdown, if not a pause, in the process of very firm tightening of the monetary tap on the part of the Fed.

Investors are clinging to information from the Wall Street Journal according to which some members of the Federal Reserve would not be against the idea of ​​slowing the pace of its monetary tightening from December before stopping the hikes in key rates at the beginning of next year. Also according to this article, the institution would be heading for a rate hike of 0.75 percentage point at its next meeting in early November.

“Fed members were hinting that future rate hikes would be smaller than previous ones and leaving the door open for a 25-50bp hike in December. However, at the last FOMC, and according to the last dot plot published in September, cumulative rate hikes by the end of the year were expected between 100 and 125 bps.” notes Vincent BOY, market analyst IG France… Consequently, great volatility will remain relevant.

To be followed statistically, the PMI indicators in first estimates for the current month, at 3:45 p.m. The industrial component is expected at 51.0, and the services component at 49.6.

The gap of October 07 could not be fully filled at this stage, even though the opportunity was clear last week, proof that any attempt to regain control of the buying camp is fragile. The candles in doji of indecision on Wednesday 19 and Thursday 20 clearly illustrated this. A drift phase under this remaining gap is the preferred short-term scenario. The market bottom matrix remains bearish.

Facebook
Twitter
Pinterest
WhatsApp
Previous article
World Cup 2022 table
Next article
Jennifer Aniston: She came one step before giving up acting – The profession she had chosen to do