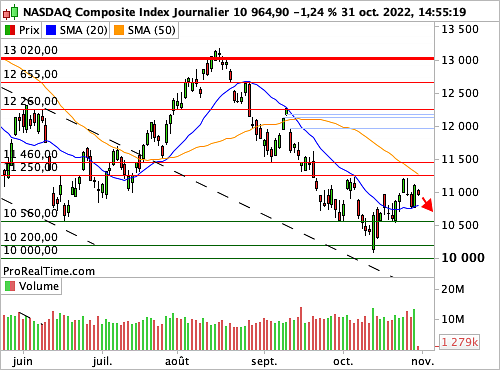 Nasdaq Composite: FOMC and NFP on the menu for a hearty week

(News Bulletin 247) – First of all, it should be noted that the East Coast of the United States will switch to winter time next weekend, throughout the week, Wall Street will open at 2:30 p.m. (Paris time) instead of 3:30 p.m.

Helped by Apple (+7.56%), rare tech star to be applauded on the stock market, the Nasdaq Composite, on fragile foundations, managed to gain 2.87% on Friday. On the other hand, the atmosphere should be much cooler on Monday, with the approach of a major monetary meeting, the FOMC of the Fed, which ends on Wednesday.

“The Federal Reserve should once again raise rates “jumbo” (75 basis points) at its meeting ending November 2.”, anticipates, like many analysts, Thomas Costerg, Senior US Economist at Pictet Wealth Management.

“Despite growing political pressures, including open letters from some Democratic senators fearing collateral damage to the economy, the Fed should stay ‘right in its boots’ given the persistence of inflation.”

The Fed will be able to rely on the PCE indices published on Friday. Consumer prices according to this index (Personal Consumption Expenditures Price Index) have indeed increased by 6.2% over one year, where the consensus was expecting 6.3%. Over October, prices rose 0.5%, within target.

The Fed will naturally take into account, moreover, tensions on employment, while the monthly figures (NFP) are expected for Friday. On Wednesday, the survey of the private firm in HR ADP will give a valuable taste.

“The Fed is also looking particularly at employment gains, which are still very resilient (the unemployment rate is at a low of 3.5%), as well as consumer inflation expectations (in particular those of the Michigan survey). The latter remain relatively high at 5% (October figure), and particularly feed fears of inflation which would become entrenched because it is rooted in mentalities”, adds Mr. Costberg.

In the immediate future, the publication of the Chicago PMI activity index has just fallen, down to 45.2, the lowest since June 2020.

The flagship index of technology stocks of the American dimension traced, on the amplitude of the body of the candle of the day before, a candle in doji tombstone, which illustrates the breathlessness of the reaction started on 13/11. This candle was confirmed the next day by a marubozu elongated, graphic illustration of a continuous mobilization of the sales camp. Friday’s session did not allow the weekly highs to be exceeded.