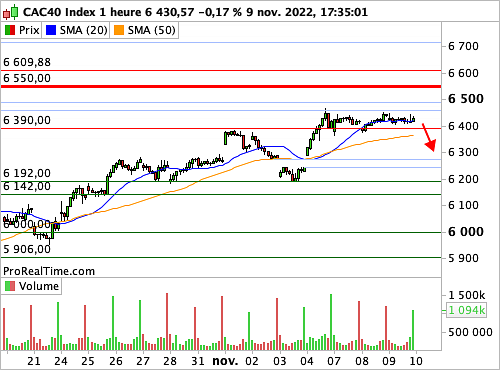 (News Bulletin 247) – The CAC 40 index (-0.17% to 6,430 points) plotted a so-called candle combination in harami in a bearish cross on Wednesday, under the influence of Wall Street, which the results of the midterm elections did not inspire. At this stage of the count, the Republicans have a slight lead over the Democrats (49 seats against 48) in the Senate. Final results for the powerful upper chamber will not be known until next month. Georgia will indeed have to vote again. Note that in the event of a 50-50 tie, the Democrats would retain control in the Senate thanks to the vote of Vice President Kamala Harris. The Republicans, on the other hand, have a clear head start in the House of Representatives, without the announced tidal wave having taken place.

In the immediate future, operators will focus on the US inflation figures, the second highlight of the week, and an essential working basis for the Fed in the construction of its monetary policy. The consumer price index will be published at 2:30 p.m. Paris time. On an annualized basis, and for the broadest basket of products (food and energy included), prices are expected to rise by 7.9%, compared to 8.2% last month.

“U.S. inflation data released this week will come under scrutiny, after the latest jobs data confirmed the continuing labor shortage. policy of extreme tightening”, note the strategists of the BlackRock Investment Institute, in the conclusions of their forum on the “new market regime”.

Something to shed new light on the latest FOMC. The different readings that can be made of it are indeed far from being binary, and the components of the equation are becoming more complex. César Perez Ruiz, Head of Investments and CIO at Pictet Wealth Management notes that J Powell “suggested that the final Fed Funds rate – estimated at 4.6% in the central bank’s dotted trajectory – could be revised at the end of the day. rise (the market currently anticipates a final rate close to 5.2% in mid-2023).”

“The process of raising rates could therefore be slower, but also longer, while aiming higher,” analyzes the asset management decision-maker.

On the stock side, Scor closed sharply up 7.6%. On the occasion of the publication of its quarterly results, the reinsurer unveiled an action plan over the next year to refocus, reduce the volatility of results and boost its profitability. Ipsen for its part gained more than 4%, the pharmaceutical laboratory published positive phase III results (last stage of clinical trials before possible marketing) for Onivyde in pancreatic cancer.

A point on the other risky asset classes: around 08:00 this morning on the foreign exchange market, the single currency was trading at a level close to $1,0000. The barrel of WTI, one of the barometers of risk appetite in the financial markets, was trading around $85.70.

To follow as a priority on the statistical agenda this Thursday, the consumer price index in the United States at 2:30 p.m.

Note that despite Friday’s public holiday (November 11, Armistice 1918), the Paris Stock Exchange will be open, under the usual opening hours and listing conditions.

the harami cross identified above, in association with the volume dynamics of the last 4 sessions, further weakens the short rally of October.

After a gap of shortness of breath (01/11), the barometer traced on Tuesday November 1st a doji with a very pronounced high shadow, uninviting. The confirmation was clear on Wednesday 02/11 with a bearish engulfing combination in slightly rising volumes, then Thursday with a bearish gap. However, the opening in island reversal on Friday and the gains made during the session itself, only confirmed the nervousness and the contrarian nature of the short-term market. Friday’s session is therefore not predictive. Overall, the index is skating on resistance levels (6390 – 6550 points), in trading volumes which contract very significantly as major deadlines approach.

This bearish scenario is valid as long as the CAC 40 index is trading below the resistance at 6550.00 points.

EUR/USD: Negative technical signals at the top of the pattern