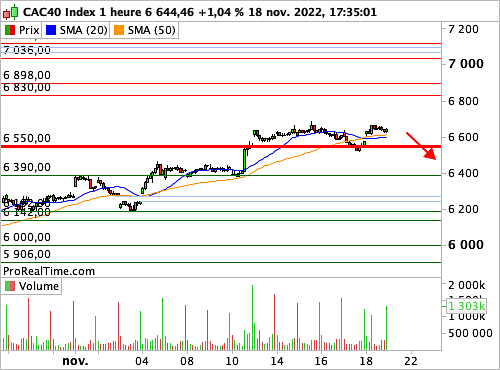 CAC 40: The engine experiences some misfires around 6,600 points

(News Bulletin 247) – Market psychology remains just as nervous near 6,600 points, against a backdrop of intense questioning about the trajectory of Fed Funds. On Friday, the flagship index of the Paris stock market, the CAC 40, gained 1.04% to 6,644 points.

While the slowdown in the progression of US CPIs had augured, two weeks ago, a relative easing of the Fed’s monetary policy, the signs of a continuation of the tightening have subsequently multiplied. James Bullard, chairman of the St. Louis branch of the US Federal Reserve, known for his “hawkish” positions, said rates should move above 5% to curb inflation. It is the same observation that was drawn up by Christine Lagarde. The President of the European Central Bank insisted on Friday on the continuation of interest rate hikes to calm the rise in prices.

In terms of macroeconomic statistics, the menu was not very rich on Friday. We should nevertheless mention the monthly sales of existing homes in the United States, showing almost no deviation from the target.

On the values ​​side, Sopra Storia took 2.55% to 144.90 euros, the market appreciating the announcement of the planned acquisition of the Belgian company Tobania, which will allow the country to double in size across Quiévrain. On the other side of the spectrum, Unibail-Rodamco-Westfield lost 1.5%. The title of the shopping center giant was downgraded by Goldman Sachs, which lowered its recommendation to “sell” with a target also reduced to 39 euros.

A point on the other risky asset classes: around 08:00 this morning on the foreign exchange market, the single currency was trading at a level close to $1.0260. The barrel of WTI, one of the barometers of risk appetite in the financial markets, was trading around $79.50.

To follow as a priority on the statistical agenda this Monday, a speech by the President of the BuBa (Bank of Germany) at 6:30 p.m. The producer price index in Germany, already published this morning, fell sharply by 4.2% month on month for October, while the consensus was +0.9%.

The rally initiated on 10/04 resulted in a sharp return to a resistance zone at 6,550 points. The ability to overcome it in large volumes would pave the way for a continuation of this rally of October. It is precisely this level that is being redefined, with congestion around 6,600 points. In the immediate term, the inability to create new high points suggests at least a breath.

This bearish scenario is valid as long as the CAC 40 index is trading below the resistance at 6898.00 points.