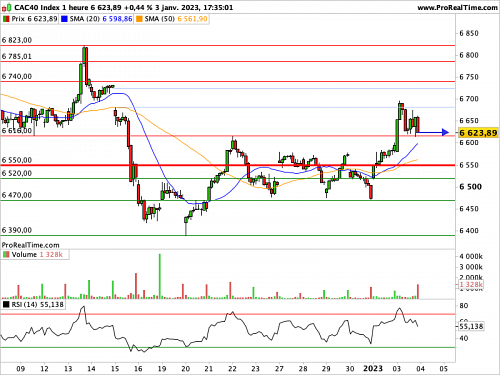 CAC 40: Tesla refreshes the atmosphere at the start of 2023

Reassuring figures on prices in Germany, on the other hand, have enabled the three-color flagship index to resist above 6,550 points, the key technical level at the start of the year (see below). Inflation in the leading economic power in the Euro Zone slowed down over one year in December and fell below 10% to 9.6%, according to the first estimate published on Tuesday by Destatis.

The problem will be twofold at the start of 2023: on the one hand the gravity and the consequences of the health situation in China, and on the other hand the confirmation or not of a decline in inflation.

“While we are talking about several hundred million new cases in a few days, the impact on the Chinese economy is immediate” notes Thomas Giudici (AURIS Gestion). “The activity indicators published for the month of December thus came out sharply down and are lower than those of April, during the strict containment of Shanghai.”

On the inflation side, the week will be particularly dense in benchmarks on employment, the degrees of tension of which are an essential component of the equation for rising prices. To be followed in particular the new job offers (JOLTS) this Wednesday, the survey of the ADP cabinet and the weekly registrations for unemployment benefits tomorrow, and as a highlight on Friday the NFP report on employment in the private sector ( excluding agriculture).

On the stock side, on the CAC 40, the leading trio is made up of Vivendi (+2.8%), Michelin (+2.7%) and Saint-Gobain (+2.6%). Thales, on the other hand, lost 3.3%, penalized by an analyst downgrading, Jefferies having abandoned its opinion on the purchase of the title of the defense group.

A point on the other risky asset classes: around 08:00 this morning on the foreign exchange market, the single currency was trading at a level close to $1.0580. The barrel of WTI, one of the barometers of risk appetite in the financial markets, was trading around $80.00.

To be followed in priority on the macroeconomic agenda this Wednesday, the final data of the PMI services in the Euro Zone, the American manufacturing PMI at 4:00 p.m., as well as the new job offers (JOLTS), also at 4:00 p.m.

Immediately, the pullback Wednesday 21/12 out of the 6,550 points must be reversed or definitively confirmed to send any usable signal. It has so far been confirmed twice. It is this pivot level (6,550) that will be the arbiter of this very first part of the year.

As for trend indicators, the relative trajectories of two remarkable moving averages send out a warning signal.