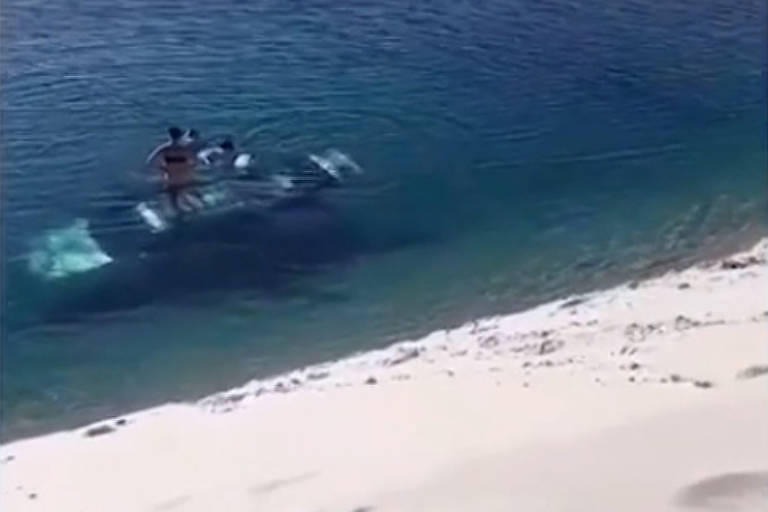 A clandestine vehicle with tourists overturned on the dunes and sank into a lagoon at dawn last Sunday (17) in a restricted area of ​​Lençóis Maranhenses National Park, in Maranhão.

Tourists entered the park illegally through a trail and crossed part of the park over the dunes of the village of Atins to Santo Amaro (238 km from São Luís).

In a region known as Rancharia, the driver of the vehicle overturned while crossing a dune and fell into one of the park’s ponds. There were no injuries.

The car was pulled out of the water on Tuesday (19). ICMBio (Chico Mendes Institute for Biodiversity Conservation), an environmental agency linked to the Ministry of the Environment and responsible for managing the park, assesses the environmental impacts caused by the incident.

Head of Lençóis Maranhenses National Park, Colonel Flávio Antônio da Silva de Jesus says that the driver should be fined and answer for an environmental crime. An environmental analyst from ICMBio was in the lagoon this Wednesday (20th) to carry out an assessment of the damage caused to the lagoon.

“As the vehicle was submerged, there is a risk of fuel and engine oil leakage. Electronic components and the battery can also cause damage. It can take years to recover the ecosystem”, he says.

With an area of ​​150,000 hectares, equivalent to the city of São Paulo, Lençóis Maranhenses has an ecosystem made up of dunes, freshwater lagoons, sandbanks and mangroves.

It has been a national park since 1981 and has restricted access. In the most primitive areas, no type of motor vehicle is allowed. In other areas, only residents of traditional communities in the region and vehicles licensed to transport tourists enter.

The park has a team of 28 servers, of which only three are inspectors responsible for preventing infractions throughout the Lençóis Maranhenses area.

The incident takes place amid an escalation of infractions with the entry of illegal vehicles into the park, as has been denounced by servers and accredited driver associations.

Cars, ATVs, UTV-type vehicles (a kind of ATV-car hybrid) and even helicopters illegally access the park, including areas with a more sensitive ecosystem. Among the vehicle owners are businessmen who own houses in the region.

Infractions such as the entry of alcoholic beverages, car stereo and portable music were also recorded, which are prohibited in the park.

In August of last year, the then head of the park José Ribamar Vieira Rodrigues was exonerated after toughening the inspection of illegal vehicle traffic.

In the month before the exoneration, he had sent a technical note to the city halls of the three cities that house the park asking for support to curb the circulation of UTV-type vehicles in the so-called buffer zones, which are around the protection area.