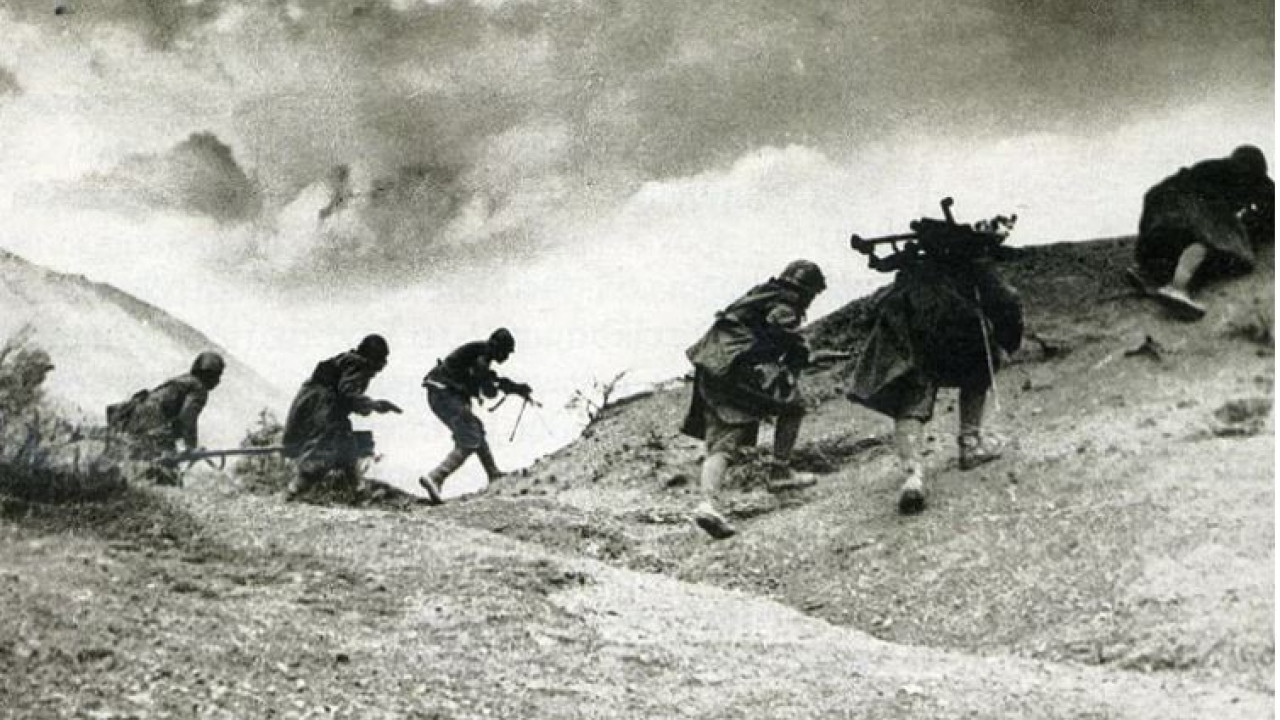 Taking the enemy by surprise was a top priority. The aim was for the Italians to think that they were surrounded by strong Greek forces and not by a small Infantry Company

The “Landzidis Company”, or “Death Company” it is not a widely “known page” in the history of the Greek-Italian war of 1940, but it is the beginning of the surprise and weakening of the Italian army, by a “handful” of Corfu who decided to change its strategic plans Benito Mussolini.

As the Teacher at the Ionian University reports to APE-MBE, Dr. Dimitrios Metallinos“the Corfu people, having for more than four centuries the experience of Venetian rule, but also fresh from the national humiliation from the bombardment and the occupation of Corfu for a few days in 1923 by the fascist forces of the same dictator Mussolini, acted in the Greek-Italian war the unique opportunity to express the repressed centuries-old national indignation in the West”.

With the declaration of the Greek-Italian war, the Corfu officers, non-commissioned officers and hoplites were transferred to the front line. The remaining Corfu military forces on the island made up the 10th Infantry Regiment, which had as its mission the defensive armor of Corfu.

According to the historical data, two weeks after the declaration of the Greco-Italian war, on November 12, 1940, the Greek forces of Epirus regrouped in order to recapture Thesprotia.

The Military Administration of Corfu undertook to form the first days of the war, the 10th Company, a detachment of surprise, from Corfu soldiers and non-commissioned officers, commanded by Captain Dimitrios Lantzidis.

The secret military operation provided for the secret gathering of all the men in the village of Giannades, Corfu, to be supplied with ammunition and dry food for three days only, to be transported by boats and disembarked at Cape Stylos in Northern Epirus, which was finally changed and the bay “Kato” was chosen. Aetos”, of the Sayada region and the event of an attack on the Italian forces of Thesprotia and the occupation of the “Vagalati” hill at dawn on November 23, 1940, since on the eve of this date Major General Charalambos Katsimitros had planned the completion of the crossing of the defense line of Kalamas river.

Taking the enemy by surprise was a top priority. The goal was for the Italians to think that they were surrounded by strong Greek forces and not by a small Infantry Company.

“The announcement of the formation of the Corfu military detachment was received with enthusiasm by the Corfu officers and soldiers of the 10th Infantry Regiment. The applications far exceeded the required number and reached about two hundred. The Commander of the Company was initially appointed the Corfu lieutenant and assistant to the Military Commander of Corfu, Konstantinos Robotis, who ultimately did not participate, being replaced by Captain Dimitrios Lantzidis, with whose name the Company was finally associated in the memory of modern-day Corfu people”, recounts Mr. A metal man.

The written order of the Military Command of Corfu was delivered by its commander, Colonel Vasilios Petropoulos, to Captain Landzidis at noon on November 22, with the strict order to open the sealed envelope during the transfer of the Company to the opposite Thesprotic coast, which was completed with many difficulties, due to severe bad weather.

“An unprovoked action by the sub-commander Ioannis Vlachos, to shoot at an Italian observation post, was, according to the evidence that has been saved, the beginning of the end for the heroic Company. The Italians became frightened, vacated the outpost, but radioed the Italian division, requesting military reinforcements. At the same time, the BBC radio broadcast, in order to mislead the Italian counterintelligence, that strong Greek forces landed behind the Italian forces, with the result that Lieutenant Vlachos’ platoon was mistaken for their advance guard. The expedition, albeit by mistake, had achieved its main objective. The deception of the enemy had already been achieved,” says Mr. Metallinos and adds: “The operation had the result that the commander of the Company was faced with objective difficulties. The military Detachment found itself in the bad weather, isolated, disoriented, without communication and visual contact with the Military Administration of Corfu. Captain Lanzidis, trapped among the Italian forces, was waiting for the general attack of the Peloponnesian divisions under General Liuba, in order to join them. The hours passed and the attack of the Greek army did not manifest itself. This delay favored the Italians, who sent a reconnaissance plane, which ascertained the position and strength of the Company. The Italian chiefs of staff now knew the whole truth and their anger became indescribable, since they found that a handful of Corfu soldiers caused a great disturbance in their army, which led them to wrong assessments and military choices. On November 24, 1940, the unequal battle began. The numerous Italians were fortified on the heights of the mountain slopes, while the detachment of Corfu fighters was exposed on the edges of the coast and on the sandy beach. From their position the Italians were in complete control of the men of the Company, who were now surrounded. The fire of the Italians was so dense, that they immobilized the Greek fighters. Due to the lack of communication with Corfu, there was not even the planned coverage by Kouloura artillery. The remaining approximately 160 men, after the departure of the platoon of the deputy commander Ioannis Vlachos, were called upon to face at least 3,000 Italian soldiers. The battle lasted from 7 in the morning until 5 in the afternoon, the time when the last ammunition of the Corfu fighters ran out. The Italians meanwhile had called for reinforcements, seeing the stout resistance of the men of the 10th Company. Captain Lantzidis, although wounded, did not stop encouraging his men. At 5 pm he was forced to raise a white flag”, says Mr. Metallinos.

The final tally for the Greek forces was 60 dead and 80 prisoners, of which 45 were wounded, while the rest managed to escape capture. The Corfu prisoners did not hand over their weapons to the Italians, but preferred to render them useless, throwing them into the Ionian Sea.

After this event, the Italians immediately retaliated. On the following two days, November 25 and 26, they carried out the “wildest” bombardment of the city with airplanes, while two days later on November 28, they returned with the bombardment of the Corfu hinterland both from the air and from the sea, after four Italian destroyers controlled the Strait of St. Stephen.

The 80 prisoners, with the 45 wounded, after much suffering were taken to a concentration camp in Fieri. “The objective, purpose of the military operation of “Landzidis Company” had been achieved, as evidenced by the two Orders of the General Headquarters, to the Military Commander of Corfu, dated November 24, 1940, i.e. the date of the sacrifice of the Corfu fighters. From both mentioned Orders the safe conclusion emerges that the General Headquarters judged that the Detachment of heroic Corfu fighters had achieved its mission. It had, in other words, created confusion in the rear of the enemy, facilitating at the same time the advance of the Peloponnesian forces”, points out Mr. Metallinos.

According to the secret reports of British diplomacy, the Greek counter-offensive of the third decade of November 1940 is the first recorded victorious operation of the allied army against the fascist “Axis” forces during the Second World War. In this military context, the Corfu mission is also included, which for this reason was positively evaluated by the British.

The positive judgment of the British was expressed by the response of the BBC which said, translated into Greek: “We are proud of the men of the 10th Company, the 10th Infantry Regiment, based in Corfu. Your mission was successful. This was the beginning of the end for the Italians. We know that none of you betrayed or gave information to the Italians. The BBC publicized your landing, which horrified the Italians, who believed that your Company was the vanguard of a powerful landing force. The allied forces are grateful to you…”.

“The more than two hundred heroes of the 10th Company, of the 10th Infantry Regiment of Corfu, the overwhelming majority of them Corfu, from all regions and social classes of our island, deserve to be remembered and honored. The study of the project proves that it was indeed a Company of future deaths, or rather a Company of heroes”, concludes Mr. Metallinos to APE-MPE.