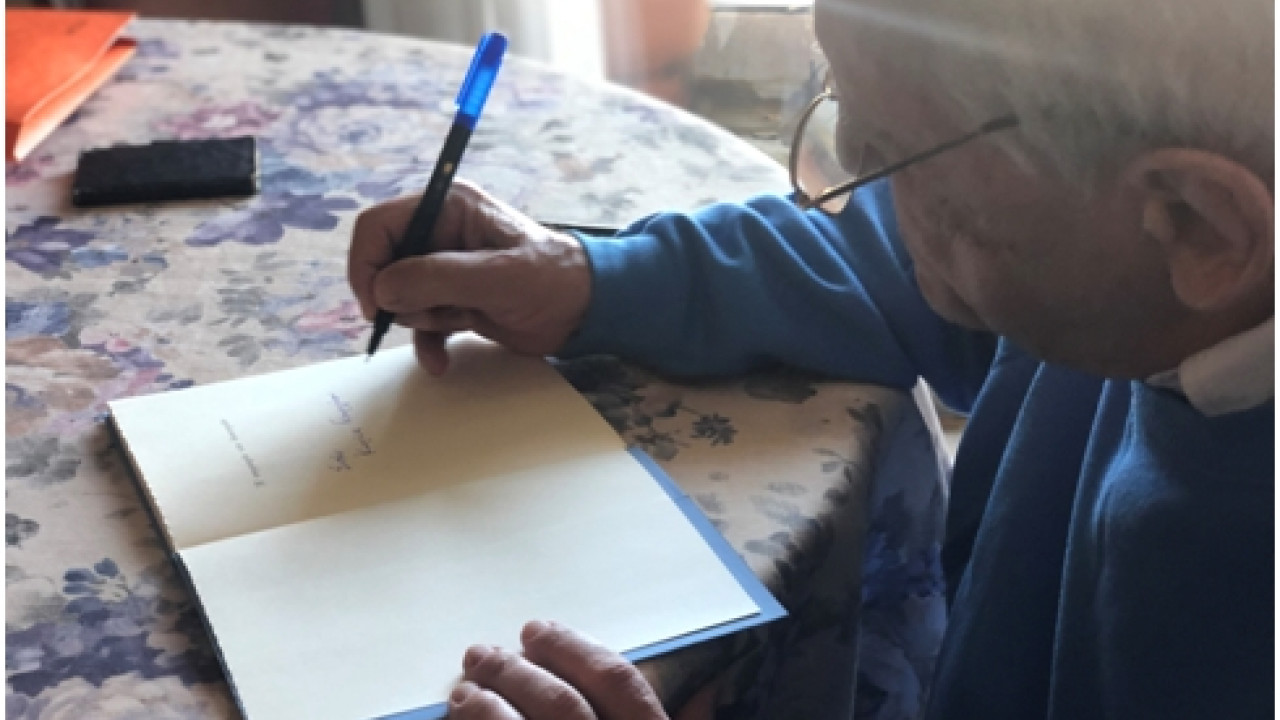 Titos Patrikios to SKAI: “My nickname during the Occupation was Argyris”

Titos Patrikios remembers his school years during the Occupation, but also his resistance action through the EAM of youth under the nickname “Argyris”

The interview took place in October 2020

“Monday, October 28, 1940. This morning, during Physics, no more than 20 minutes would have passed, Mr. Karatasakis came and said something to Mr. Toufexis. We all thought he said something to him so we wouldn’t go to school. Indeed, Tufexis told us with various trinkets that Italy had declared war on us…”

Titos Patrikios was only 12 years old, an “internal” student still at the Anargyreio and Korgialenio School of Spetses, when Italy declared war on Greece, after Metaxas’ historic “No” to the Italian government’s ultimatum sent through the Italian Ambassador to Athens, Emanuele Gratsi. The 92-year-old has kept his diary ever since and reads me a few pages…

“I can’t describe to you what happened. We were all shouting against it! We all wrote on the boards, on the desks, everywhere. Long live Greece, Down with Italy.

In the evening there was a false alarm. End of the first war day for me…”

Speaking to SKAI in 2020Titos Patrikios remembers his school years during the Occupation but also his resistance action through the EAM of youth under the nickname “Argyris”.

“In 1940-1941 when the terrible famine started, and by bad luck and a terrible cold, snow, ice, people were dying in the streets. And we, in the morning when we went to class – I had now come to Athens, to the Varvakeio School which was next to the market – we had to trot through 1-2 frozen corpses every day that winter.”

I ask him what impression this image of the dead leaves on the child’s soul.

“It is indelibly etched. Even now when we’re talking and I’ve mentioned them, at the same time it’s like I’m seeing them.”

“I remember, it was 1942, October 28 was approaching. Like now. A classmate of mine, 3 years older – who later became a famous writer, Vangelis Goufas – comes and suggests that I join EAM Youth. That’s what I was waiting for, for someone to come and ask me something like that.

It was the eve of October 28 and we went to the park on the Field of Mars to crown the statues of the heroes. All around were Italians in armored things we called tins, but we went and crowned them heroes. Then, gathering in the Chemistry building. I remember, at the corner of Chimeio on Solonos Street, I wore glasses then, I was nearsighted. To save them I had put them in the back pocket of my trousers. And an Italian carabinieri approaches me, grabs me and starts kicking me. And so they broke my glasses that I had put in my back pocket to save them. It’s the first piece of wood I ate from an Italian…

Then we shouted “Long Live” to Solonos and then dispersed. This was my first participation in a resistance event…”

I remind him of the name “Lela”. The girl who saved his life in para 1, while he was propped up against the wall to be executed by a group of German collaborators, a few days before the liberation.

“Lela was a nickname. We all had a nickname back then. Mine was “Argyris”, Titos Patrikios explains to me with a sparkling look and a teenage mood.

“Indeed, in the days of the Decembrians, another Argyris was killed. And they hear “Argyris was killed”, and my mother only didn’t have a heart attack. It made me cry for a whole day. Until the night when he saw me and realized that I am not the Argyris who was killed…”

Emotionally recalling those years, he points out to me that often, when we refer to the Occupation, we only keep the hunger, the executions, the tortures, the tragedies, but we forget that at the same time there was an “amazing cultural activity, a flowering”.

“Athens was full of theaters. Bookstores everywhere. Books were published, with what little paper there was and despite censorship. Magazines came out. Thus, in magazines published during the Occupation, I published my first poem, in 1943, when I was 15 years old. In the “Start of Youth” specifically.”

With shining eyes he tells me, as we come to the end of our conversation: “Nazism was defeated in the past at the sacrifice of millions of people but we see it now also in Europe and in our country re-emerging. It doesn’t scare me, but it does worry me. We must not be complacent. We must always be vigilant because fascism hardly disappears.”

When I ask him what scares him today, having experienced a past with many trials, he answers me that what scares him more is “the madness that we may have as a people, than the enemy, which is either the coronavirus, or Turkish expansionism, or anything another.”

I am impressed by his words shortly before the end of our conversation: “Be very careful with the messages or advice of the elders because many times they are not aimed at your own good, but at the justification of theirs…”

Facebook
Twitter
Pinterest
WhatsApp
Previous article
Sakellaropoulou: The spirit of national unity forged in the Albanian saga is a precious legacy for all of us
Next article
Four ways to style a leather shirt