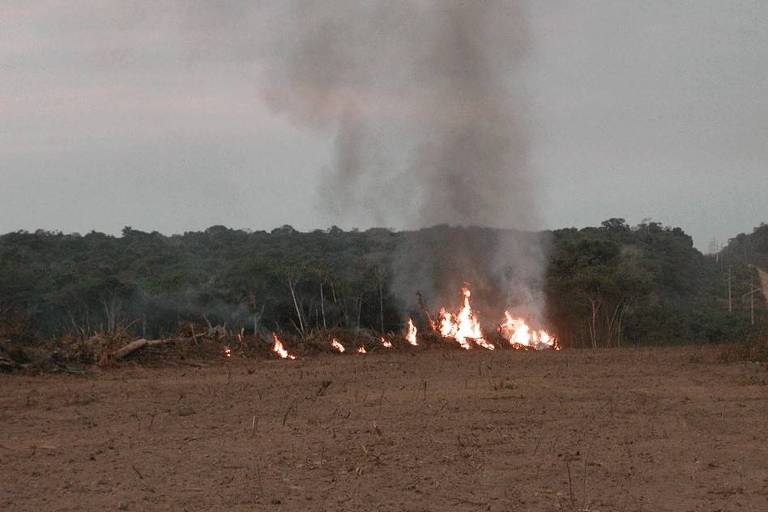 Fire in the Amazon is more linked to the use of fire in pastures and deforestation than to drought, says study

A Brazilian study shows that the uncontrolled use of fire by humans has more influence than drought on the fires recorded throughout the Amazon between 2003 and 2020. According to the authors, most periods with a high number of fire outbreaks are more related to agricultural fires and deforestation than to extreme drought conditions.

On average, 32% of the areas burned annually in the biome were on agricultural land (dominated by grasslands), followed by natural grasslands (29%) and areas of mature forest (16%). When evaluating deforestation and water deficit anomalies, the first factor contributed more than the second to fires in the analyzed period.

In addition, by innovating and expanding the scope of analysis to the Amazon regions of the nine countries with forests in their territories, the work showed that Brazil and Bolivia together accounted for most of the annual detections of fire outbreaks in the period. This represents, in the Brazilian case, on average, more than half of the areas burned annually in the Amazon and, in Bolivian lands, about a third.

Although 63% of the Amazon is in Brazilian territory, the forest extends across Peru, Bolivia, Colombia, Venezuela, Suriname, Guyana, French Guiana and Ecuador, covering a total area of ​​around 6.67 million square kilometers (km²), considering the limit of the Amazon lato sensu).

The study had the participation of scientists from the National Institute for Space Research (Inpe), the National Center for Monitoring and Alerts for Natural Disasters (Cemaden) and the Federal University of Maranhão (UFMA). The article is part of a special issue of the scientific journal Global Ecology and Biogeography that aims to discuss the growing threat of wildfires in the world.

Currently, Brazil has again experienced a high number of fires in the Amazon — the accumulated number of fires in the first nine months of this year, especially in August and September, was the worst since 2010, when there were 102,409 outbreaks, according to data from the Queimadas Program, from the Inpe. Simultaneously, as of 2019, deforestation rates in the biome have reached the highest levels since 2009, annually exceeding 10,000 km² of deforested forests. The trend has continued this year according to alerts from the Deter system.

“The scientific literature on fires in the Amazon was more focused on Brazilian territory. We expanded this scope to other countries, seeking to understand where fire activity is being more critical and deserves attention, looking at different land cover and uses. agriculture, especially in Brazil, where it is mostly pasture, uses fire as a technique for vegetation renewal, but without proper management. As a result, the risk of escaping and reaching the forest is great”, evaluates Marcus Vinicius de Freitas Silveira, doctoral student at the Division of Earth Observation and Geoinformatics (DIOTG-Inpe) and first author of the work.

For researcher Luiz Eduardo Oliveira e Cruz de Aragão, head of DIOTG-Inpe and one of the authors of the article, the work advanced by expanding the geographical area analyzed and covering almost 20 years of data. “With this long period, we were able to identify anomalies within the time series, as in 2020. The results show the spread of the use of fire throughout the Amazon, both in processes for cutting and burning the forest and for the continuity of pasture management”, complete.

Aragão coordinates the TREES group (Tropical Ecosystems and Environmental Sciences lab) and participates in the Fapesp Research Program on Global Climate Change (PFPMCG), within which the study was conducted. Financing took place through three projects (16/02018-2, 20/16457-3 and 20/15230-5).

As the researcher said, 2020 appeared as one of the “time series anomalies”. According to the study, that year, which coincides with a weakening of environmental control operations resulting, among other reasons, from the Covid-19 pandemic, the area burned was the largest since 2010 for the Amazon rainforest.

Unprecedented fires also hit the Pantanal in 2020. That year, this biome had a water surface shrinkage 34% above the annual average, according to work published in July by researchers, including Aragão and scientist Liana Anderson, another author of the work. about the Amazon.

As in the tropical forest, in the Pantanal the fires were a consequence of the intensification of human activities related to fire. Of the fires in 2020, 70% occurred on rural properties, 5% on Indigenous Lands and 10% in protected areas, as shown in the survey, which also received support from Fapesp.

Capacity building and dissemination of techniques for fire-free land management are crucial to minimize the increasing risk of large fires. Both the increasingly fragmented landscape and a warmer climate with less rainfall lead to increased ‘flammability’

According to Liana Anderson, the main short-term action to reduce the risk of forest fires in the Amazon is to extinguish illegal deforestation in the region and tackle the problems of land grabbing. “Concurrently, the training and dissemination of techniques for managing fire-free land are crucial to minimize the growing risk of large fires. Both the increasingly fragmented landscape and a warmer climate with less rainfall lead to increased flammability”, says the scientist.

Researcher Celso Silva-Junior highlights the situation in Maranhão, a transition zone between the Amazon biome and the Cerrado, which also experienced an 18% increase in hotspots between January and September this year compared to the same period in 2021. As noted in our article, recent fire activity in this region is closely linked to deforestation, induced not only by federal environmental setbacks, but also state-level setbacks.”

Fire is among the main types of disturbance responsible for degradation in the Amazon, with negative impacts on the structure and dynamics of the forest. These effects can compromise carbon stocks and the ability of trees to capture COtwo.

The fires also affect the health of residents of the region, increasing air pollution and leading to hospitalizations for respiratory diseases. A report produced by the Institute of Studies for Health Policies (Ieps) in partnership with Ipam Amazônia and Human Rights Watch indicated that fires associated with deforestation in the Amazon led to 2,195 hospitalizations for respiratory diseases in 2019, of which 49% were people aged 60 years and over and 21% of babies up to 1 year old.

Also in 2019, the afternoon of August 19 turned to night in São Paulo, partly due to smoke from the burning of the Amazon rainforest, which was added to a phenomenon caused by very low charged clouds that hid the sunlight (read more here).

In research published in Global Ecology and Biogeography, the group considered time series of detection of fires and burned areas, making an annual crossing of the affected regions with the various types of land use and cover.

In addition, the Amazon territory was divided into grid cells (10 km by 10 km), identifying annual anomalies in the occurrence of fires, rainfall, maximum accumulated water deficit and deforestation.

The results showed that, between 2003 and 2020, Brazil alone concentrated, on average, 73% of annual fire detections in the Amazon, followed by Bolivia, with 14.5%, and Peru with 5.3%. Dividing the fires in each Amazon region by the total area, the highest density occurred in Bolivia, with an average of six fires per 100 km.two /year, followed by Brazil, with three per 100 kmtwo /year.

The occurrences were higher in the 2000s, associated with high rates of deforestation in the Brazilian Amazon, reaching lower values ​​between 2013 and 2014 and increasing again in the following years.

In terms of area burned, Brazil and Bolivia contributed, on average, with 56% and 33%, respectively, of the annual total in the Amazon over the series. Venezuela and Colombia followed, with around 4% each. Although Peru was the third most relevant Amazon region in terms of fires, it registered only 0.63% of the total annual area burned.

When scientists analyze the type of land use, agricultural lands (crops and pastures), natural fields, mature forests and wetlands were the ones that burned the most over the historical series — on average, 32%, 29%, 16% and 13%, respectively, of the total annual area burned.

Agricultural land also shared the largest proportion of the total annual area burned in the Amazon region of Brazil (48%) and Peru (51%), while mature forests were the most affected in Ecuador (76%) and other wetlands in Guyana. (46.5%).

“If we think that fire is a tool for managing open areas for agriculture, whether for planting or grazing, we realize that this technique puts at risk not only the forest and its biodiversity, but also the evolution of agriculture in the region towards a a more sustainable system. The solution would be to seek a strategic planning of land use, which would involve various levels of government and society, including training people and facilitating the use of more advanced techniques”, says Aragão.

The article “Amazon fires in the 21st century: The year of 2020 in evidence” can be read here.

Facebook
Twitter
Pinterest
WhatsApp
Previous article
Konstantinos Argyros snorted at the concert with 50 Cent – Adored by 50,000 viewers
Next article
Egypt – Turkey: Collapse of diplomatic relations without return due to Libya – What Cairo says