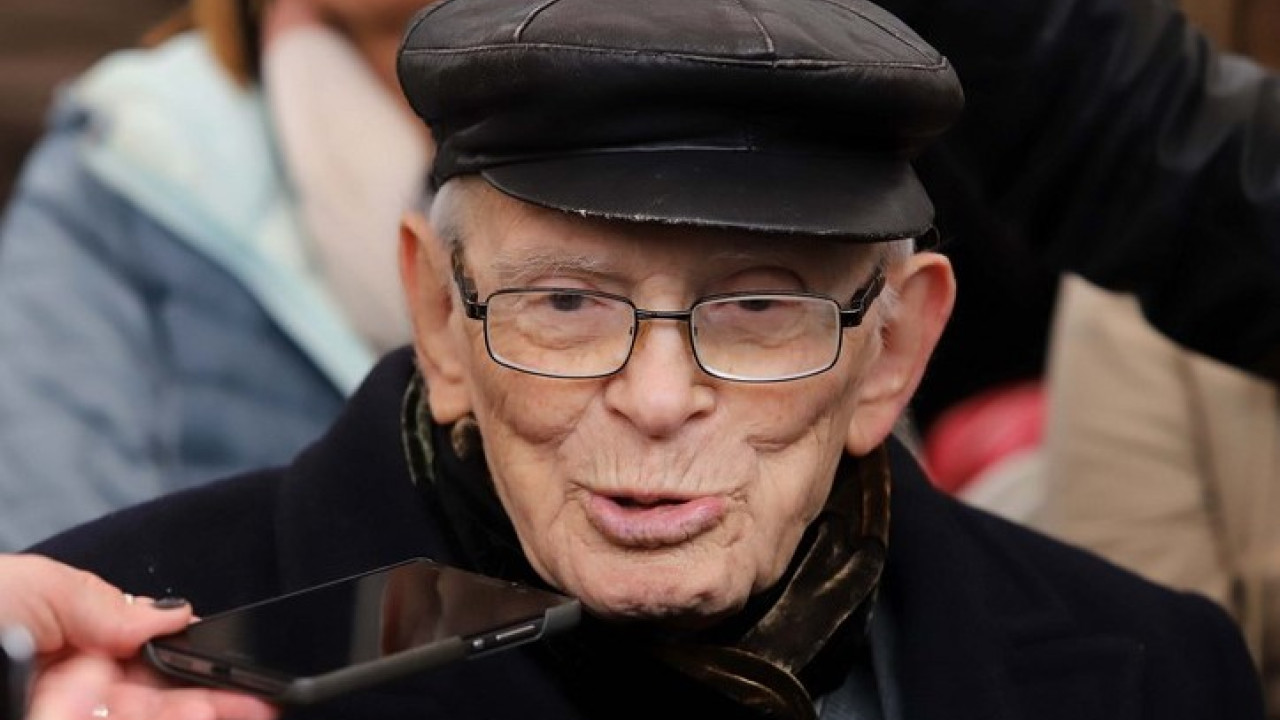 On March 15, 1943, the first death train left for the Nazi camps. Young Moshe and his family were to make the long journey next month…

Thessalonica (native) Holocaust survivor Moshe Aelion, who lived with his family permanently in Israel and until his last breath fought to keep the memory alive, passed away this morning at the age of 97. of the Holocaust so that humanity does not experience such a tragedy again.

“For years I have believed that it is essential that the human consciousness never forgets what happened during the Holocaust. That’s why I decided, like many other survivors, to narrate, as long as I live, what I experienced”, said Moshe Aelion, in an interview he gave years ago to APE-MPE, who after the atrocity of the camps-hells of G ‘ Rise, started a new life in Israel.

He returned to Greece for a visit only in 1987, while in the meantime he was particularly reluctant to talk about the Holocaust even in his close family circle.

However, when he finally decided to “break” the barrier of silence, he fought daily battles so that the dust of oblivion would not cover the memory.

“Whoever survived the Holocaust, must speak about it”
A deeply moving testimony by Greek-Jewish #Holocaust survivor Moshe Aelion, who was in Auschwitz

His strong message to the future generation is “Never say it can’t happen”#WeRemember#HolocaustRemembranceDay@AnnitaDemetriou pic.twitter.com/1vmI8wtRpE

In 2013 he had come to his hometown, Thessaloniki, in order to shout “NEVER AGAIN” together with all those who had taken part in that first memorial march in the city for the victims of the Holocaust.

He returned in 2018, once again attending this annual commemoration, with a deep belief that “humanity must know that something like this can happen again anywhere, and therefore must be determined to avoid it with all its might.” the power, by all means.”

He always had his daughter Rachel by his side, who announced, this morning, the news of his death, with a post on social media.

From Thessaloniki to Auschwitz

Moshe Aelion was born in Thessaloniki on February 25, 1925. His parents, Eli and Rachel, and he together with his one and a half year younger sister Nina lived in an alley in Thessaloniki, in his grandfather’s house.

He was still an immature child when the Germans entered Thessaloniki and fear began to grip his family as they had heard, since the beginning of the war, that the Nazis were mistreating the Jews both in Germany and in the territories they occupied.

His father died in 1941, a few days after the Germans entered Thessaloniki,

In July 1942, when the Germans gathered the Jewish men of Thessaloniki (18-45 years old) in Eleftheria Square, Moshe Aelion was …lucky, since he was half a year away from the 18-year-old threshold.

“After 2-3 hours we started to hear that the Germans were beating them, not letting them drink water, doing ‘exercises’ for them”. We realized that something new is happening. And really, after a few days, they called many of them and took them to forced labor in different parts of Greece”, he said and remembered that from then on and for the next two months, the actions hostile to the Jews followed one another .

“They designated five areas in the city where Jews were allowed to live (ghettos), forced us to sew a yellow star on the left side of our clothes, ordered us to mark our houses and shops, forbade Jewish students from going to school , they announced that they would transport the Jews to Poland…’.

On March 15, 1943, the first death train left for the Nazi camps. Moshe Aelion and his family were to make the long journey next month – a journey, every minute of which was always indelibly etched in his memory.

“We were locked in the wagons for six days and six nights, until we reached our final destination. The situation in the wagons was very difficult: there were more than 80 people in our wagon. The only light came from two small windows at either end of the carriage. A barrel cut in two served as a toilet, no food was distributed, every 2-3 days the train stopped at some isolated station and they let us get off and fill up with water. Then they emptied the barrel… If someone died, they left him out of the wagon and forced his family to continue the journey. All these were not good omens, but we hoped that they would soon pass.”

The bad things not only did not pass, but what they experienced afterwards is one that the human mind cannot comprehend. When at midnight on the sixth day they reached the terminus they thought they were in Cracow, as they had been told. When they started seeing people “in the striped clothes”, as he described them, and forcibly dividing them into groups, he realized that things were different.

“In our family we were separated, as we were ordered. My uncle and I in a group, my grandfather with the old men and the women together. Only for my sister, who was a year and a half younger than me, we were hesitant. In the end we told her to go with the other women in the family, without knowing that we condemned her, with our decision, to immediate death”, recounted Moshe Aelion himself.

“Our families were killed and burned the night we arrived,” a classmate of his, who had stayed in Birkenau before Auschwitz, where they died, told him two months later.

He managed to get out alive from the “death march” forced upon them by the Nazis, at the end of January 1945, he passed through Mauthausen and Melk to find himself in Ebensee, where the situation was such that “the human mind could not imagine worse” but also from where he was to be released, a little later. He remembered until the end of his life that day when “everyone ran to the tanks and wanted to touch them” and he ran as well as he could… “On the antenna of a tank I see a small flag. One of the crew was of Greek origin. Many Greeks gathered around it and in a moment the Greek anthem was suddenly heard. Although in a very difficult physical condition, we were free!”.

The “Odines of Death” and the epilogue of his life

These “Odes of Death”, which he felt on his skin, when he passed through the gates of the hell of the Auschwitz camp and what he lived through, he recorded in his book of the same title, within the pages of which he “closed” the most painful part of his life.

In his book “Odines of death”, published by “Alexandria” publications, he managed to summarize his life in the camps and after, with the help of a diary that he started keeping 4.5 months after his release.

The epilogue for Moshe Aelion will be written, tomorrow (Wednesday 2/11), at 14:00, at the Holon cemetery.