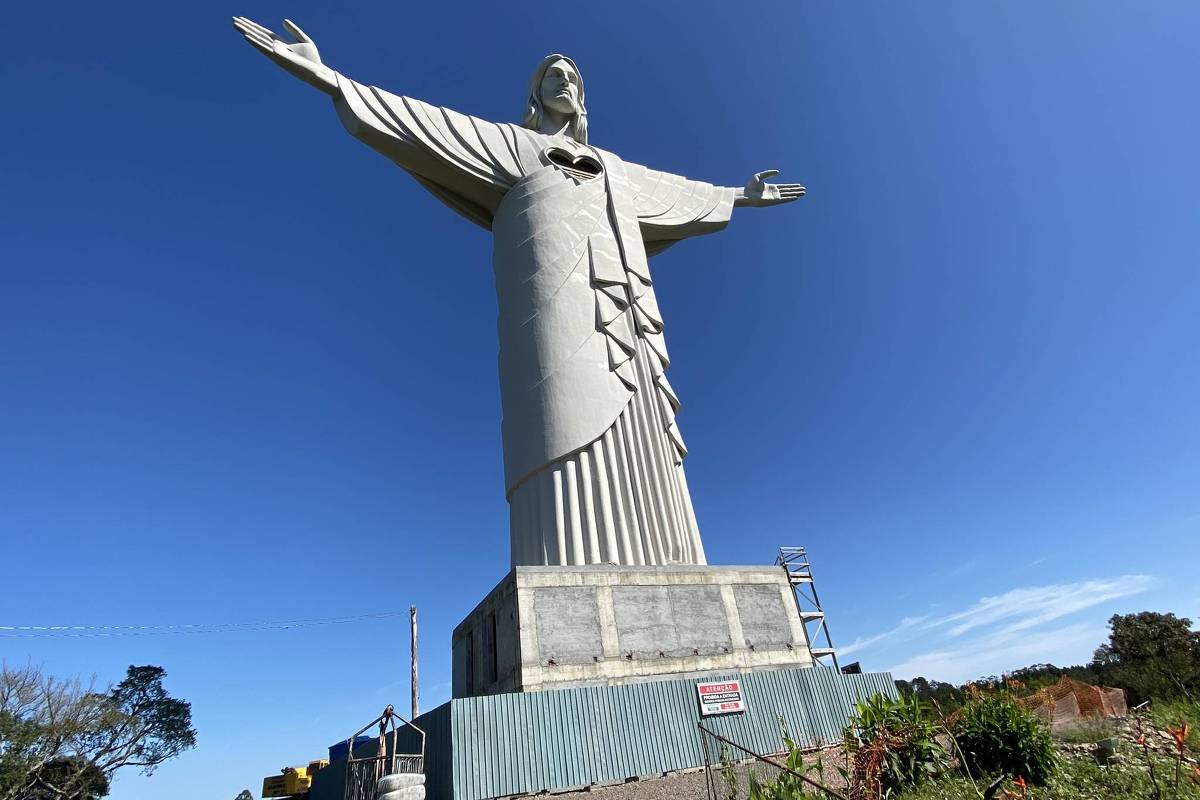 Since last April, the Cristo Redentor in Rio de Janeiro has had a competitor — pardon the pun — worthy of it. It is the Christ the Protector, built in the city of Encantado, in Rio Grande do Sul. The statue is considered the largest Catholic sculpture in the world, with its 43.5 meters high, including the pedestal.

Inaugurated in May 2021 and completed in all its details a year later, the monument has already received more than 100,000 Brazilian and foreign tourists from 21 countries. The information is from the Associação Amigos do Cristo de Encantado (AACE).

Construction began in July 2019, at the top of Morro das Antenas, at 436 meters above sea level. The place is considered one of the postcards of the municipality, which has just over 23 thousand inhabitants and has a beautiful panoramic view of Lagoa da Garibaldi and Vale do Taquari.

BRL 4.1 million were raised in donations to complete the project that aimed to build an image larger than that of Rio de Janeiro —which is 38 meters high, counting the pedestal— without raising public funds.

Former mayor Adroaldo Conzatti met with residents and businessmen in the region to find ways to raise funds to raise the structure and make it a new tourist spot in the municipality. Died in March 2021, a victim of coronavirus, Conzatti did not see the completion of the work.

One of the highlights of the Cristo de Encantado is its frame of a heart, which will serve as a gazebo and will receive red lighting at night. The site, however, is still under construction.

“The installation of glass and elevator is lacking,” said Robison Gonzatti. The ticket to climb in the heart will be charged separately.

The sculpture weighs around 1,700 tons and is about the size of a 14-story building. To give you an idea of ​​its size, the face of the Christ alone, which took three months to sculpt, weighs six tons.

At the top of the hill, around the feet of the sculpture, parking lots, shops, restaurants, a chapel and public restrooms will be built to serve tourists. The Jardim do Acolhimento is also planned, a space for contemplation next to the native forest, attached to a playground and to elevated walkways with viewpoints to the Taquari Valley.

The future garden will be located in an area of ​​30 thousand square meters.

“The proposal is to create a unique environment to welcome tourists before arriving at Christ, without interfering with nature. The space invites visitors to reflect, breathe the fresh air, enjoy the green of the forest and the singing of the birds” , says Mayor Jonas Calvi.

Work on the development of the new spaces should start in January 2023 – the budget of R$ 3 million reais will be paid by the city hall. The access road to the hill is under construction and will soon receive asphalt. Along the 3 km route, a bike path and a space for walking should be opened.

Despite not having its surroundings completed, the mega sculpture can already be visited by tourists on weekends. Admission costs R$ 30 and the money raised will be invested to continue the works.