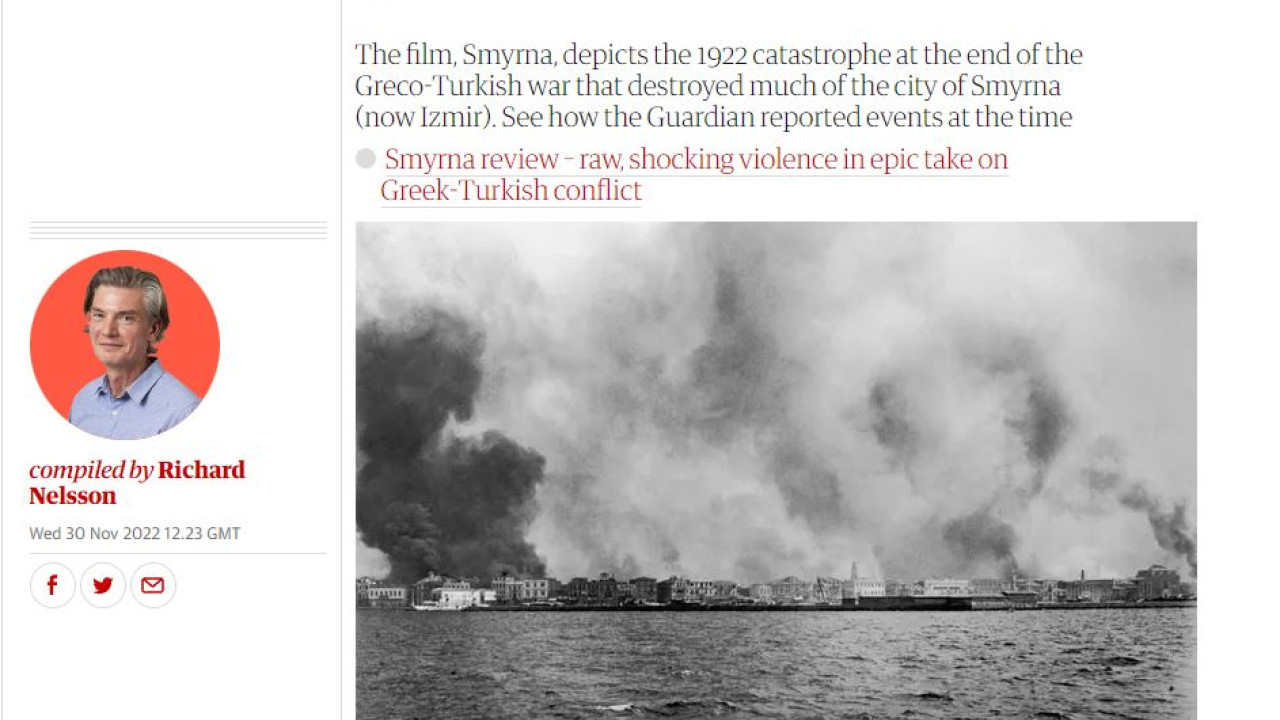 The Guardian – on the occasion of the film “My Beloved Smyrna” – retrieved from its archive and republished an article from 1922, where it described the dramatic events of the destruction of Smyrna

The international screening of the film “My Beloved Smyrna” – shown yesterday in a hall of the Metropolitan Museum of New York – has attracted the interest of major foreign media, both for its artistic and historical aspects.

The British Guardian – on the occasion of the film – retrieved from its archive and republished an article from 1922, where it described the dramatic events that took place in the destruction of Smyrna, provoking the anger of Ankara.

“Smyrni was almost completely destroyed” is the title of the newspaper correspondent’s text on September 16, 1922.

At one point in the text it states: “The fire was started with oil yesterday at noon by Turkish regular troops in order to hide the bodies of those massacred (Greeks and Armenians) the previous night – they are estimated at over a thousand.”

Elsewhere he writes: “We have terrifying reports of Turkish atrocities in Smyrna… The Turks set fire to the Armenian and Greek quarters and the American Girls’ Collegiate Institute, as well as the Evangelical College and the French College of St Joseph.

Miss Minnie Mills, the headmistress of the Ladies’ College, saw a Turkish officer carrying a can of oil near the building, which was then set on fire. The college girls – along with 1,300 refugees who had taken refuge in the college within the college grounds – fell into the hands of the Turks while trying to escape.

The Armenian archbishop and the Greek Chrysostomos were murdered.

Last night the flames from the burning houses lit up the whole town. On the wharf of the port, in the semi-darkness, thousands of refugees were huddled together crying or kneeling in prayer.

The only allied help that was given was to illuminate the masses of refugees with the searchlights of the battleships, to save them from the atrocities of the Turks in the dark.”

The British newspaper on its website republishes other telegrams and testimonies from the destruction of Smyrna and also what happened in the following days.

Mimi Denisi’s film will be shown in 700 cinemas in the US as well as in the European Parliament and its international appeal has angered Ankara, which speaks of “Greek propaganda” and “a plan of the “invader” to present the historical events as genocide”.