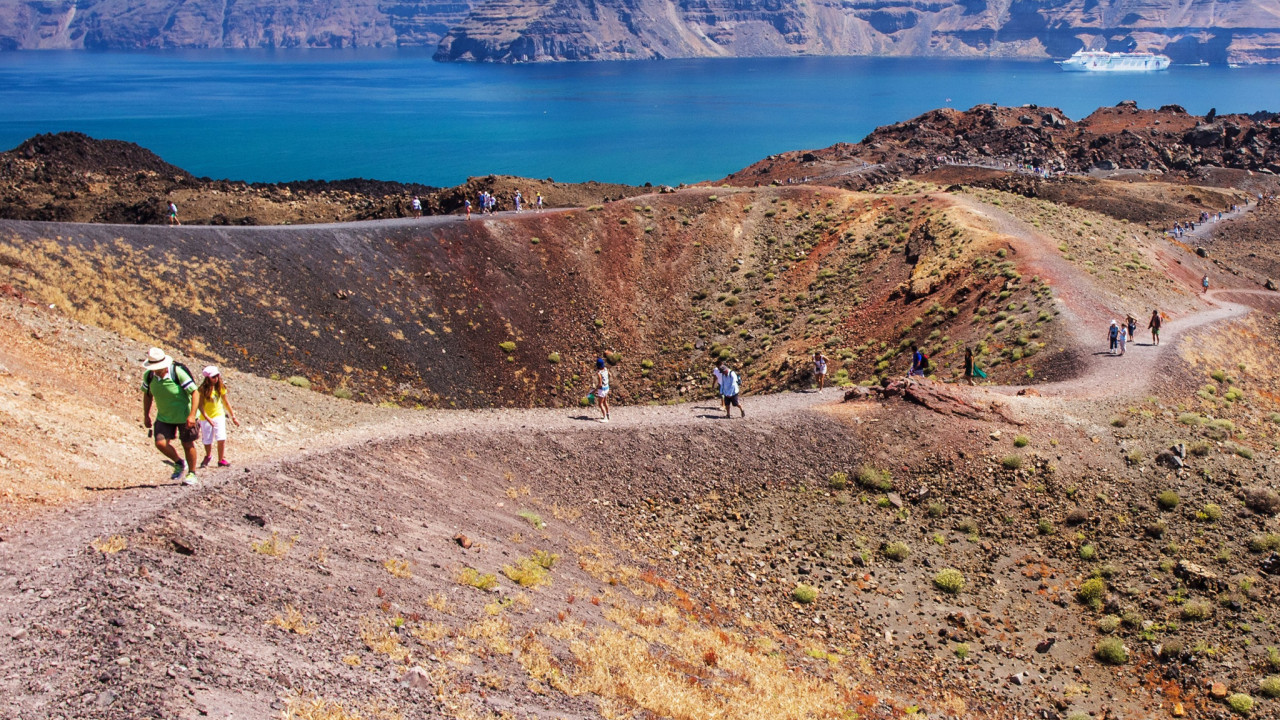 Santorini volcano: Scientists have identified the magma chamber at the bottom for the first time – Photo

“A major eruption is likely in the next 150 years if the current rate of magma chamber expansion continues,” researchers say

Under monitoring is its volcanic potential Columbus in Santorini, whose magma chamber was identified for the first time.

According to scientists, one constantly increasing volume of magma it accumulates in the magma chamber, at a depth of about 3 kilometers below the seabed volcano.

“The presence of this magma chamber highlights the chance a future one explosion and that is why it is important that this particular volcano – the most active underwater volcano of the entire Mediterranean – is continuously monitored in real time” states a statement from the American Geophysical Union (AGU), based on a previous related publication by foreign and Greek scientists in the journal ” Geochemistry, Geophysics, Geosystems”.

The research in the AGU journal, led by geophysicist Kajetan Chrapkiewicz and volcanologist Michele Paulato of Imperial College London and with the participation of Ms. Nomikos and AUTH professor Constantinos Papazachou, was based on innovative analysis of seismic and other data for Columbus which had emerged from earlier research by the Proteus mission – another US research ship in the area a few years ago.

The results led the researchers to estimate that “the current state of the magma chamber indicates that an eruption with potentially significant effects is possible in the future (although not imminent), therefore we propose the installation of a permanent observatory that will concern the continuous recording of earthquakes and of seabed geodesy”.

As they point out, “our results show that Columbus is a serious threat and warrants a real-time monitoring facility,” something that has already begun to materialize with the SANTORY program and the installation of scientific instruments at the bottom of Columbus.

Investigations of an international mission at the bottom of the volcano

At this very time, the international mission Expedition 398 of the large American research vessel JOIDES Resolution, as part of the International Ocean Discovery Program (IODP), is underway in the Columbus area, with the participation of Greek scientists from EKPA and ELKETHE. Researchers have just drilled northwest of Columbus with the goal, among other things, of discovering traces of past eruptions that have occurred in the area. However, it will take some months (from July onwards) until the first findings of the mission are made public, which will be completed in February with additional drilling inside the Santorini caldera.

At the same time, as Deputy Professor of Law Paraskevi of the Department of Geology & Geoenvironment of the University of Athens, who is aboard the JOIDES Resolution, stated to APE-MPE, monitoring instruments were placed in Columbus in the context of the Greek research program SANTORY and with the financial support of the Municipality of Thira.

He emphasized that “this is the first time the volcano is being monitored, while additional instruments will be installed in the coming months and the island’s residents will be informed of the results of the measurements by the international scientific team”.

In 1650 AD Columbus had exploded, killing about 70 people in Santorini due to poisoning from the explosion gases. That eruption was triggered by accumulated magma in a corresponding magma chamber, probably at a corresponding depth of 3-4 kilometers below the seabed. The researchers estimate that the magma in the chamber has a tendency, over time, to reach a similar volume again. According to their estimates, since the volcano’s last eruption in 1650 AD, the magma chamber has grown at an average rate of about 4 million cubic meters per year. The total volume accumulated in the magma “reservoir” (magma chamber) beneath Columbus is estimated at 1.4 cubic kilometers.

According to Chrapkiewicz, if the current rate of expansion of the magma chamber continues, sometime in the next 150 years Columbus will reach the 2 cubic kilometers of magma estimated to have been present when the 1650 AD eruption took place. But while an estimate of the future volume of magma can be made, according to the researchers, there is no way to say with certainty when the volcano’s next eruption will occur.

The researchers say that while there does not appear to be any immediate danger, because Columbus is at a relatively shallow sea depth (about 500 meters), this is likely to increase its explosiveness. They predict that when the explosion occurs, it will cause a tsunami and an ash column tens of kilometers above the sea level, which could have serious consequences for Santorini, which is only seven kilometers from Columbus.

The researchers hope that combined the new data from SANTORY and the ongoing IODP mission around Santorini will now provide a better picture of the region’s volcanic potential. As APTH professor Konstantinos Papazachos told APE-MPE, although a very good seismological and geodetic monitoring network has been operating in Santorini for two decades from the Santorini Volcano Study & Monitoring Institute (IMPIS), any additional data and information that about Columbus, they are extremely useful. At the same time, he emphasized that these data will be used by an international research team, under the coordination of the National Geological and Mineral Research Authority (EAGME), to assess the relative seismic-volcanic risk of Columbus, so that policy measures can be designed accordingly protection.

“We need better data on what really lies beneath these submarine volcanoes. Continuous monitoring of them will allow us to make a better estimate of when an eruption might occur. With such systems, we will probably know about an eruption days before it happens , so people will be able to evacuate the area and stay safe,” Chrapkiewicz said.

Facebook
Twitter
Pinterest
WhatsApp
Previous article
Dollar opens slightly lower against real on US holiday day
Next article
China: At least 5 dead in an explosion at a chemical factory