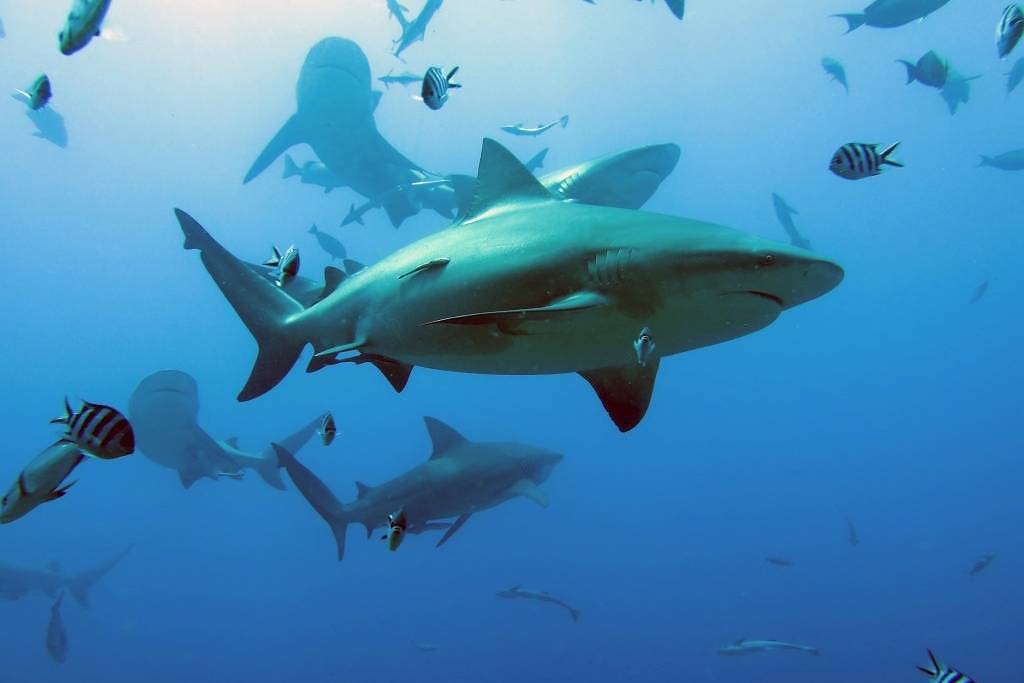 Majority of reef shark and ray species are threatened with extinction

Sharks and rays that live in association with coral reefs or use these areas for passage are the ones that are most threatened with extinction in the last 50 years.

According to research published in this Tuesday’s edition (17) of the scientific journal Nature Communications, almost two-thirds (59%) of the 134 species of reef sharks and rays present some level of danger, such as vulnerable, threatened or critically endangered. Of these, 14 (10.5%) are critically endangered, 24 (17.9%) are threatened and 41 (30.6%) are classified as vulnerable.

This index is only lower than that of marine mammals, such as whales and dolphins, with 75% of the eight species evaluated as having some type of threat. All other groups of organisms considered were at lower risk of extinction.

The data analyzed were obtained from the last update of the IUCN (International Union for Conservation of Nature) red list, from 2021 to 1970, comprising a period of half a century of species assessment.

The study made a calculation of the so-called red list index (RLI), which calculates the proportion of species of least concern and those considered threatened. The closer to one, the better the conservation status, while a rate close to zero means that more species are close to becoming extinct.

In 1970, all elasmobranchs (a group that includes rays and sharks) had RLI indices close to one (0.95). This number dropped to 0.64 in 2021. Considering the specific groups, reef rays are the ones that today have the lowest index, of only 0.6, although the downward trend is very similar to that of reef sharks.

According to the survey, both intentional and accidental fishing —when the fish is captured by the net or with the use of a fishing tool, but it was not the product of interest (called “by-catch”)— was the main cause of threat to these fish in coral reefs (100% of species with available data). Then, the other causes that today threaten the lives of sharks and rays are climate change (36%), urban development in coastal areas (29%) and marine pollution (9%).

Contrary to what was expected, the species considered to be transient were the ones that presented the greatest threat (76%), while the resident species were proportionally less at risk (44%). Also, species found in less than ten countries had a lower risk of extinction when compared to those with greater geographical distribution (43% against 95%).

The risk was even greater for large species such as the bull shark (carcharhinus leucas), classified as vulnerable by the IUCN, and which can reach 3.5 meters in length.

For Samantha Sherman, a researcher at Simon Fraser University, in British Columbia (Canada) and first author of the study, the result reflects the mobility of these animals, which, because they are in the coastal areas of several countries, are subject to different jurisdictions. “They are subject to encountering nets or fishing equipment at some point in their lives, and they are not necessarily going to find similar management measures in each location”, she explains.

The researcher also points out that measures to protect sharks and rays must consider the biology and life strategies of these animals. “As sharks and rays reach breeding age later and live longer, the effects of protective measures will only be observed after decades of implementation,” she says.

In the 2000s, countries began to regulate shark fishing, especially to curb the practice known as “finning”, the name given to the removal of shark fins for sale in specialized markets for “disposing” of the rest of the animal’s body at sea. In Brazil, the legislation prohibiting “finning” dates from 2009, but even in Sherman’s study the country appears as one of the places with the greatest risk for reef sharks.

According to ichthyologist Fábio Motta, professor of Marine Conservation at Unifesp de Santos, although there has been an important evolution in terms of the global agenda for the preservation of these animals, there is a very strong prejudice in the population that undermines the conservation of sharks and rays.

“Due to the incidents with humans and also because they are an important part of the diet in some places, such as in the North, where they are fished and sold, and also considering the life cycle and longevity, sharks and rays appear frequently in endangered species lists”, he says.

According to the researcher, the ideal would be to think of strategies that combine monitoring of coastal areas, inspection, creation of protected areas and awareness of the population about the origin of the fish. “It’s no use just prohibiting fishing for the sake of prohibiting it, you need to act with popular participation to change the means of consumption”, he assesses.

According to him, an effective measure would be a taxonomic list with the species included as threatened to prohibit fishing. “Today, in Brazil, everything that is a shark comes under a generic category of ‘dogfish’, and what is a ray goes under a ray. And we have no knowledge about the quantity and types of species caught annually”, he explains.

Patricia Charvet, from the Federal University of Ceará and one of the authors of the study in Nature, recalls that measures to protect sharks, although they are still incipient, already exist in Brazil, while rays continue to be the most threatened and unprotected fish.

“In some places there are solutions that have been successful, but in general they need to be done together. It is important to highlight that in the case of rays and sharks, fishing is the main activity that threatens the animals, so make quotas for the volume of fishing, limit the areas, having zones adjacent to the preserved areas where animals can circulate, are some of the measures that can be adopted both in Brazil and internationally”, he says.

The international study also discusses the role of marine environmental preservation areas, known as MPAs. According to the research, weak or incipient government legislation was associated with a greater risk of species extinction, and this raises the debate of creating permanent restriction zones for the fishing of animals.

This is the case of the Abrolhos National Park, 65 kilometers from the south coast of Bahia. According to a study carried out by biologist Fernanda Rolim, from the Marine Ecology and Conservation Laboratory of Unifesp de Santos, the same as Motta, in areas where fishing was allowed, no reef sharks were found, while in zones classified as totally restrictive they were animals were sighted, such as the lemon shark (Negaprion brevirostris), the baskethead shark (Carcharhinus perezi) and the nurse shark (Ginglymostoma cirratum).

“Today there are classifications to create good areas of environmental protection, with well-defined criteria, and that this allows the preservation of species. Many sharks and rays depend on corals for reproduction, so it is important to also understand this nursery role. There is no point in creating one marine protection area in an open sea region where there are no sensitive species”, he evaluates.

Facebook
Twitter
Pinterest
WhatsApp
Previous article
“How To” for Education: The new video of the SYRIZA campaign
Next article
Sweden’s patience with Turkey is running out: We see no reason not to approve NATO membership

Bad weather Barbara: In which areas of Attica will schools be closed on Wednesday