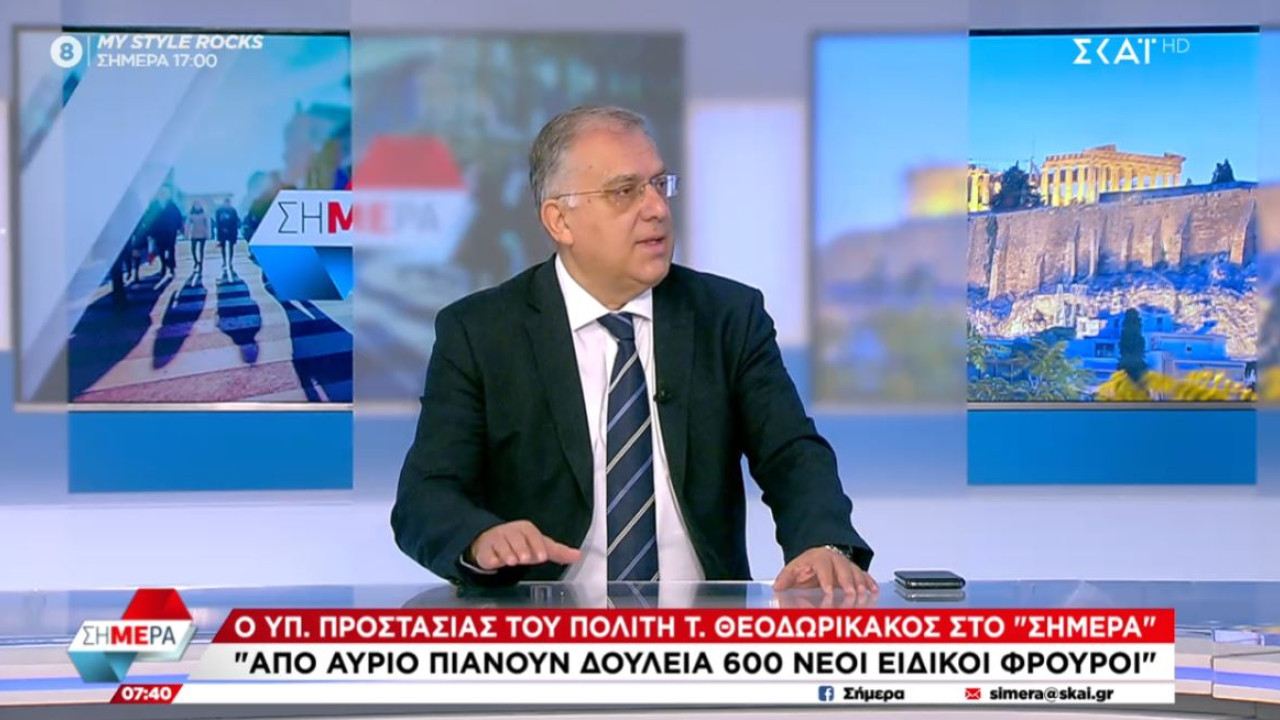 Theodorikakos on SKAI: Tomorrow at the Evros fence with EU ambassadors “to see how much work is being done there”

What he said to SKAI about the SYRIZA spot with “the police beating the universities”, about the 600 special guards and about the case of Patras

“Tomorrow I am going to Evros with the ambassadors of all EU member countries to show them there, in the field first hand, where we will proceed to extend the fence. So that the whole of Europe can see how much work is being done there,” emphasized Takis Theodorikakos on SKAI and on the show “Today” with Dimitris Economou and Akis Pavlopoulos.

At the same time, he noted that “in 2022, with the presence of the Police in Evros prevented the invasion of 260 thousand illegal immigrants and 1500 criminals».

600 special guards in AT Attica

The Minister of Civil Protection also referred to the recruitment of 600 new special guards who will strengthen the AT of Attica:

Tomorrow, 600 new special guards will be presented to all the ATs of the Attica basin. And the weight falls on the areas that have a lot of organic vacancies. They have completed their 4 month training.

Heavy weight in the sections of its center of Athensgreat burden on western districtsin areas of increased delinquency, in areas where there are Roma camps in which we continue and conduct operations aimed at finding weapons and drugs.

70% of the crime is in Attica but here is 30% of the Police. And this is a decades-old situation. In the 17 months that I have been serving in this position, all of them were placed in Attica, as were the 600 specialists.

We have 56 thousand police officers and of these, 19 to 20 thousand now reach the basin of Attica. They don’t reach us in Attica because this is where 70% of the crime is.

It is coming to an end when the Police were the original signature etc. Another 1,600 police officers will be released in the next period.

As for her dismantling of the criminal organization in PatrasMr. Theodorikakos emphasized:

“The police worked for a long time to solve the case and I congratulated him for that. So far there doesn’t seem to be anything else behind this case. However, this is a very serious case because they had committed many robberies, they had endangered many people.

The numbers show that in Greece we had the lowest murder rate in the last 15 years and the highest detection rate. Low and medium delinquency, which concerns every citizen, is in 2022 reduced by 25% compared to the period 2015-2019. I will be satisfied when it falls even more overwhelmingly.

“The SYRIZA spot about the Police in Universities is moving around”

Commenting on the SYRIZA spot which states that “the police enter the universities and beat”Mr. Theodorikakos commented:

“This spot is elsewhere for elsewhere and SYRIZA is also elsewhere for elsewhere in its positions and in its reports about young people. That is, I don’t believe that the new kids that this spot shows are the new kids that exist in Greek universities and most obviously the Greek police whenever they have entered schools they have entered to assign them to the students. I remember the student residence in Zografou that had turned it into a den of delinquency, crime, theft, robberies, drugs, rape and that was OK for the SYRIZA gentlemen.”

“We have the ability to achieve self-reliance”

End for the election polls pointed out:

“I believe that the ND will reach the elections with a strong asset, the credibility and effectiveness of its work, and with the most powerful weapon, Prime Minister Kyriakos Mitsotakis himself, who proved to be the right person in the difficult conditions the country faced. We have every possibility to achieve self-reliance and this is a condition for stability in the country and to move forward with confidence.”