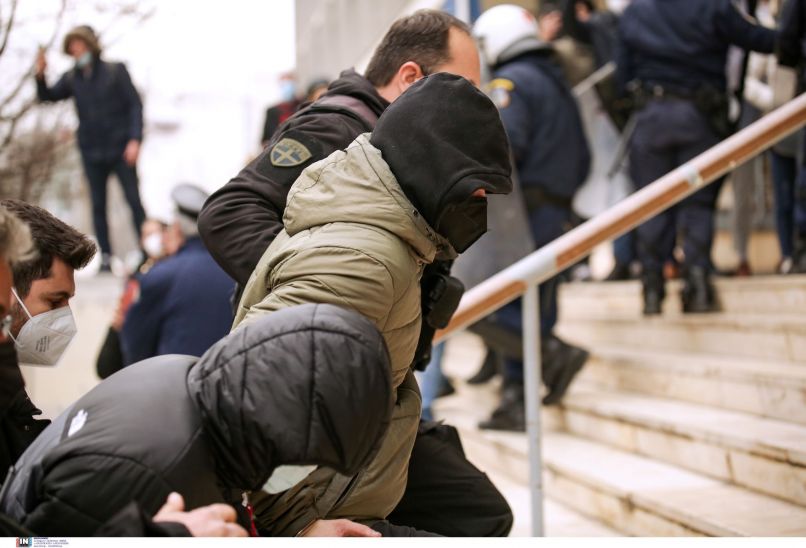 Murder Alki: 6 accused in prison – The remaining 4 are under investigation today

The apologies of those arrested for the brutal murder of 19-year-old Alkis continue with four more involved passing through the door of the 7th regular interrogator in Thessaloniki today, while on Thursday night the 20-year-old who had fled to Albania surrendered to the Greek authorities.

It is recalled that the 20-year-old had initially surrendered on Thursday afternoon to the Albanian authorities in Korytsa and there was an obstacle regarding his extradition to Greece, however he voluntarily surrendered to the Greek authorities and was transferred to Thessaloniki.

At the same time, three of those arrested were remanded in custody yesterday. After a marathon of apologies, the investigator and the prosecutor unanimously “showed” them the way to prison. They are two young people, 21 years old, and a 23 year old. So far, six defendants have been remanded in custody for the murder.

At the same time, the “greatness of soul” displayed by Alkis’s father is shocking.

“I regret … I will say what happened that night,” says the 20-year-old who was extradited to Albania.

A week has passed since the murder, an international arrest warrant had to be issued against him, but the 20-year-old says he regrets that he left and says he wants to be tried.

“I am just sorry I left. I want to go back and be judged to tell the whole truth about what really happened that night. “I am very sorry for the child,” he said.

Despite the 20-year-old’s consent to be extradited to Greece, several legal actions were required and time was needed to complete the process.

He appeared voluntarily and surrendered to Albania stating that he relinquishes all his right to remain in his country and wants to come to Greece and be tried, said his lawyer, Paraskevas Spyratos.

The 20-year-old and the 11 accused who were wanted by the authorities as after the murderous attack of the 19-year-old, had fled to Albania by road with his father and grandmother from Krystalopigi, could not return to Greece due to an international warrant and rejected the possibility of passing illegally in our country. So he preferred to surrender to the Albanian police in Korytsa. However, its publication in Greece was doubtful and time consuming. Even if the 20-year-old himself agreed to be extradited to Greece, this could not be done because Greece and Albania do not have an agreement between them on the extradition of citizens.

Late on Thursday night, however, the 20-year-old surrendered to the Greek authorities and was transferred to Thessaloniki. EL.AS officials report that today he will go to the prosecutor, while there will be correspondence from the ministries of justice of the two countries about his case.

What does the DNA show on the scythe?

The forensic laboratories of EL.AS. have begun to give answers to the case of the murder of 19-year-old Alkis in Thessaloniki from the moment that the arrested are blaming each other and in the testimonies one blames the other for the brutal crime.

What was found on the scythe

According to a SKAI report, Alkis’s DNA was found in one of the murderous weapons used by the perpetrators in the attack, in the scythe, in which, as reported by EL.AS officers, a fingerprint of the 21-year-old IK was found.

It is recalled that one of the 19-year-old’s two friends was injured with the same scythe.

What was found in the crib

At the same time, in a barrage of mutual accusations, the people arrested for the murder of Alkis indulge in their apologies, breaking the criminal “omerta”.

One defendant nails the other so that he can be treated more favorably before Justice. So far, six defendants have been remanded in custody for the murder.

Specifically, the 23-year-old who was arrested first, claims that the murderous scythe was held by his 21-year-old friend, while the 25-year-old “Athenian” had a wooden stick on it.

He, he says, that just came out of the white clio he was driving.

The 23-year-old’s lawyer said that “by the time he got out of the car, the beating had already started and he remained motionless outside the car”.

However, the 21-year-old who apologized to the interrogator yesterday “gave” the 23-year-old as the leader of the gang, who organized the attack against the undefeated Alkis and his company.

As the 21-year-old’s lawyer said, “he claimed that he has no participation in individual acts that brought the fatal result. He cited the evidence and the video footage and believes that due to the common disgust that the case radiates – and rightly so, there is a deadly treatment at the moment “.

The one who carried the scythe is the 21-year-old former football player of the PAOK children’s team.

He claims that he was not the killer, but the 25-year-old “Athenian” killed Alkis, with a curved knife he carried on him.

Respectively, the 21-year-old’s lawyer said that he revealed to him who Alkis’s killer was and where the knife was. “He mentioned who took the life of Alkis, this child, with a knife, and he has indicated where this knife is, to be ordered through ELAS, to find the knife with which the life of the child was taken. »

According to information in the case file, both videos from the moment of the murderous attack are included, which reached the authorities, by anonymous emails, as their senders were afraid to deliver them themselves.

ELAS officers are thoroughly investigating all the findings they have collected from the scene of the murder ambush, while trying to identify bloodstains with perpetrators.

According to what the authorities have documented, in the white car, where the driver was the 23-year-old who was arrested first, the co-driver was a 20-year-old, who was injured in the hand with the knife he was holding. In addition to the 20-year-old co-driver, another 20-year-old sitting in the back seat was also holding a knife.
In the 2nd black car, there were 4 hooligans, who were definitely holding – among other things – an iron pipe.

In the 3rd car, the driver has not yet been identified. The 25-year-old “Athenian” was the co-driver, while the 21-year-old was sitting in the back with the scythe.

“The scythe and everything that was found was present from the beginning in the 3 cars that started. “He took it from the seat, like his neighbor who had a crowbar,” said the 21-year-old’s lawyer.

The car that had turned on Gazi to trap Alkis’s company has not yet been located, 10 days after the murder.

The lawyer of the 21-year-old who allegedly was holding the deadly scythe admitted that his client was holding the scythe, however, as he emphasizes, it is not this deadly weapon.

This scythe fell on him and what he said afterwards and it has been heard is that “I lost the scythe”. But with this scythe the fatal blow has not been done. It has been done by another means and I expect him to testify in his apology “, said the lawyer of the 21-year-old defendant, Apostolos Lytras.

The cycle of apologies continued with another defendant denying before the interrogator that he was actively involved in the murderous beatings against Alkis and his two friends.

“I reached the point last, without holding an object in my hands. I went to the stairs of the apartment building, where one of the injured victims was standing and hitting one of my co-accused with his helmet. “All I did was grab him with my hands and pull him,” said the 21-year-old.

I do not want revenge, I want justice

At noon, the father of the undefeated Alkis was present at a friendly match between Kavala and Doxa Drama, which was held in memory of his 19-year-old son, at the municipal stadium “Anthi Karagianni”.

“I accept the apology. “I would like to shake their hand and say condolences to them because they did not have the opportunity to make Alkis their friend to see what a wonderful child he is,” said Alkis’s father.

Before the start of the match, a wreath and a picture of the murdered Alkis were placed on the tartan of the stadium, with the players.