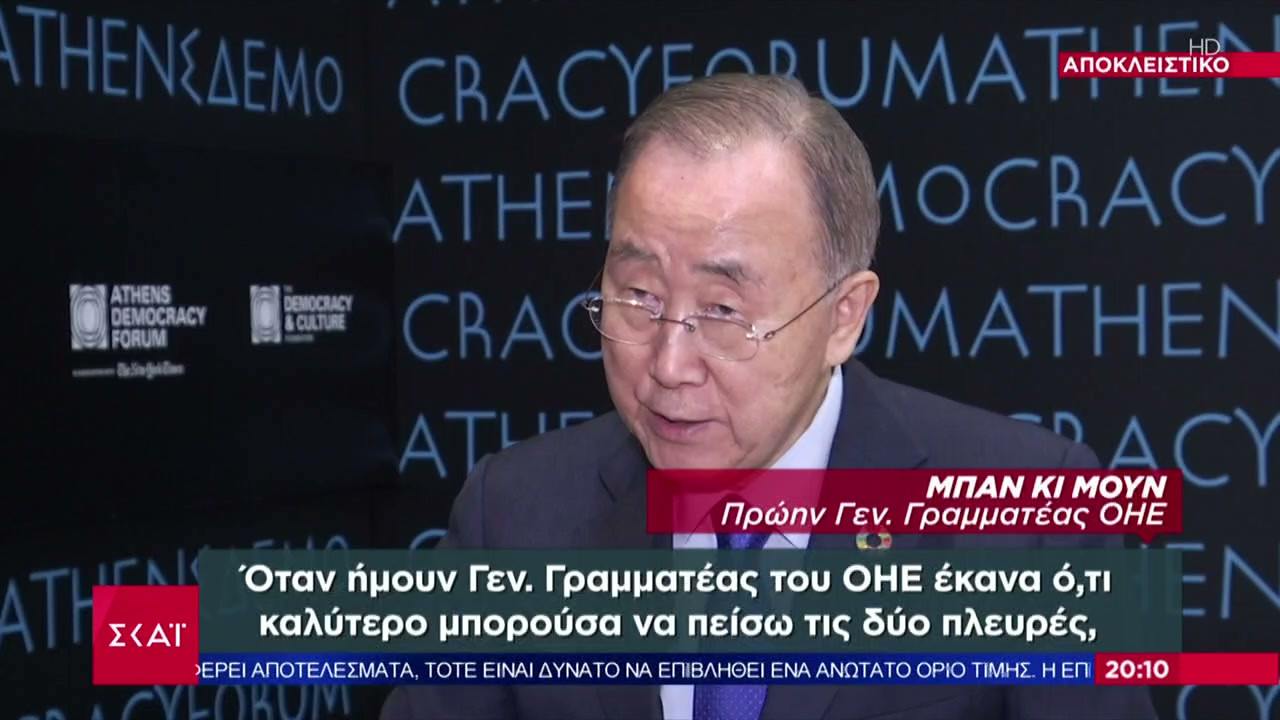 Former UN Secretary General to SKAI: I am worried about the tension between Turkey and Greece

Former UN Secretary-General Ban Ki-moon talks to SKAI about his concern and disappointment over the escalation on the part of Turkey, the tension in Greek-Turkish relations and what message he is sending to Vladimir Putin in the midst of the Ukrainian crisis.

He expressed his concern and his disappointment at the escalation on the part of Turkey, speaking to SKAI The former UN Secretary General Ban Ki-moon talking to Nicoleta Kritikou about the tension in Greek-Turkish relations but also what message it sends to Vladimir Putin in the midst of the Ukrainian crisis.

SKAI journalist: In recent weeks, we have seen a crescendo of Turkish rhetoric directed against Greece challenging the territorial status quo as defined by the Treaties. Is regional security and stability at risk?

Ban Ki-moon – Former UN Secretary General: It is sad that the tension between Turkey and Greece continues. When I was UN Secretary General I did my best to convince both sides especially the Turkish government to cooperate fully with the mediation role of the UN. I am deeply concerned because this tension continues. Because of the situation we live in, illiberal democracies – countries do not respect international law and institutions.

SKAI journalist: Even after condemnation from the European Commission and the State Department, saying that the sovereignty of the Greek islands is not disputed, Erdogan is escalating the challenges. Are you afraid of a hot episode in the Aegean?

Ban Ki-moon – Former UN Secretary General: War is not an option under any circumstances. We are seeing the results of Russia’s unilateral actions in Ukraine. Turkey and Greece are democratic countries and they love peace, because this tension continues all these decades. It is time for the leaders of the two countries, with the help of the UN and the EU, to resolve the differences.

SKAI journalist: Russia held referendums aimed at annexing four occupied regions of Ukraine. The West pledged not to recognize their results. Will these regions suffer the fate of Crimea?

Ban Ki-moon – Former UN Secretary General: Russia’s illegal invasion of Ukraine is reprehensible, it cannot be accepted. I visited Ukraine on August 16 and saw with my own eyes how terrible the mass killings of civilians by the Russian army were. I was terrified. For these crimes (Russia) must be held accountable.

SKAI journalist:We watch the condemnation of Russia’s actions at the UN, but we see Putin escalating. It threatens to use nuclear weapons and instrumentalizes energy. What could stop him?

Ban Ki-moon – Former UN Secretary General: I call on President Putin and the Russian government to stop the illegal invasion. It is sad and unacceptable that the UN Security Council is inactive because of the veto that Russia can exercise. I hope Russia will come to its senses and reflect on its responsibilities as a permanent member of the Security Council. It is unacceptable for a superpower to attack another sovereign state.