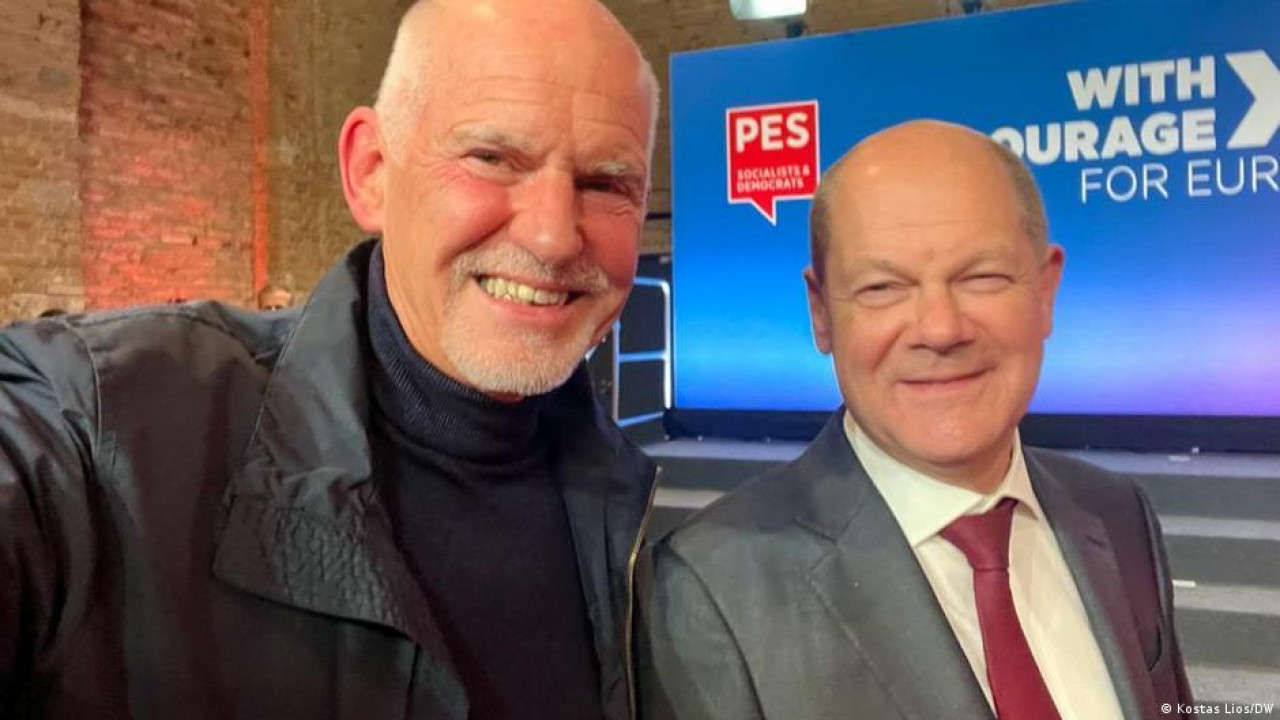 Papandreou’s revelation to DW: We have come close to a solution to the Cyprus issue and settlement of the continental shelf

“Putin’s Russia must not win” – Chapter Greek crisis: “We have done our duty – Germany is punitive” – ​​”It is not the Greek people or the Turkish people who want war”

On the sidelines of the European Socialist Summit, the former prime minister George Papandreou spoke to DW about him war in Ukrainethe lost Greek-Turkish friendship and the mistakes of the crisis.

Discussions with former leaders who were called to manage the destinies of their countries, especially in pivotal periods, are always of particular interest, political, historical, journalistic. How much more so when they take place in Berlin, between Alexander Platz and the Brandenburg Gate, with the heavy shadow of 20th century history and while another war is raging on the eastern edge of Europe. On the sidelines of the European Socialist Conference, we met the former prime minister and for many years foreign minister George Papandreou, who participated in the capacity of the president of the Socialist International. The questions are many, inevitably connected to Ukraine and the geopolitical rearrangements that affect Greece as well. What are current and former decision makers afraid of in discussions with each other? Can Ukraine win? Will Russia use nuclear weapons?

“Putin’s Russia must not win”

“The war in Ukraine is a flagrant violation of international law. The European project began as a peace project. The goal was the realization of ‘no more war’. Today we are living this nightmare again,” Giorgos Papandreou tells DW, noting that it is very difficult to estimate the outcome of the war. “Lately we have been seeing Ukrainian military successes on the field. On the other hand, Russia is a powerful country. Of course, Putin thought it would be an easy task to reconquer Ukraine. He obviously miscalculated not only with regard to Ukraine but also with the reaction of Europe and many other countries.” The Russian invasion actually had the opposite – from what was expected for Moscow – consequences: the strengthening of NATO, which had weakened for years, with Sweden and Finland wanting to join it.

The former prime minister believes that Putin’s Russia should not win because “it would be a bad omen at the international level, meaning that the war may be time-consuming but in the end something will be won (territorially). This could send the message to other authoritarian leaders, who may also have expansionist aspirations.” However, he believes that even now diplomacy should come forward with the involvement of the UN and the EU, hoping that time has not been lost for a settlement by peaceful means. As for the nuclear threat, he believes that just talking about nuclear weapons is unacceptable for humanity. “It not only creates fear but encourages nuclear or non-nuclear powers to see it as a means of pressure or coercion to achieve their goals, with the risk that at some point humanity will be faced with annihilation and a nuclear war.”

But what is happening at the same time in the neighborhood of Greece? How does George Papandreou, who associated his name as Minister of Foreign Affairs with Greek-Turkish friendship, see Turkey’s daily threats? “We are all concerned about Tayyip Erdogan’s rhetoric. And only as rhetoric is it unacceptable. We as a country have been prioritizing diplomacy for many decades and I have always said this as Minister of Foreign Affairs”, says G. Papandreou. “We are not an aggressive country, we are a country that simply wants the rules to be followed, for there to be respect for national sovereignty and territorial integrity, and through this respect to have good relations with our neighbors.” On the other hand, he considers that the attitude of Tayyip Erdoğan – whom, as he told us, he knows well and in fact at all stages of his political career, since he was mayor, then prime minister and finally president of Turkey – should be seen as an effort “political survival” of himself and his regime. The search for internal and external enemies also moves within this framework.

However, what George Papandreou reveals about the period of the Greek-Turkish rapprochement near the turn of the millennium, which was even a step before bearing significant fruit, according to the former prime minister, is also of interest. “We had gone through a period of 15-20 years, during which there was a systematic dialogue and rapprochement between the two countries. Then we came very close to solving the Cyprus issue, but also to settling the issue of the continental shelf.” In fact: “When we talked together with Turkey and cooperated for peace in the region, whether in the Balkans or in the Middle East, they listened to us much more than when we were alone, either Greece or Turkey.” And as he characteristically says, “we must understand that it is not the Greek people or the Turkish people who want war. That’s why we need to strengthen citizens’ diplomacy as well.”

Capital Greek crisis: “We paid our debt – Germany is punitive”

Closing the discussion with Giorgos Papandreou in Berlin, we couldn’t help but look back on the painful years of the economic crisis, which he was called upon to manage for two years as prime minister, but also on the role of Germany. “Instead of solidarity in Europe, which Olaf Solz spoke about at the Congress of European Socialists, there was then the punitive perception and austerity, which hurt both the countries trying to adapt and Europe with the prolonged recession.” Europe, according to George Papandreou, was slow to understand that it had to do united ‘whatever it takes’, as Mario Draghi said, in order to deal with the markets. He did it, of course, as he says, following the euro crisis, then with the pandemic, recently in the face of the war in Ukraine. “This is what he must do now with the energy sector.”

To a question about whether he himself would have acted differently during the critical period of his prime ministership (2009-2011), he answers: “We did more than what was needed. What did not exist then, was a strong wall against market speculation. This came after my government (…) Unfortunately the German policy at the time was punitive, it punished the wrong government and a people who had virtually no responsibilities (…) We did our duty. I believe Europe has learned, even behind our backs. May he put these lessons into practice from now on, because only a strong Europe can face the big challenges.”